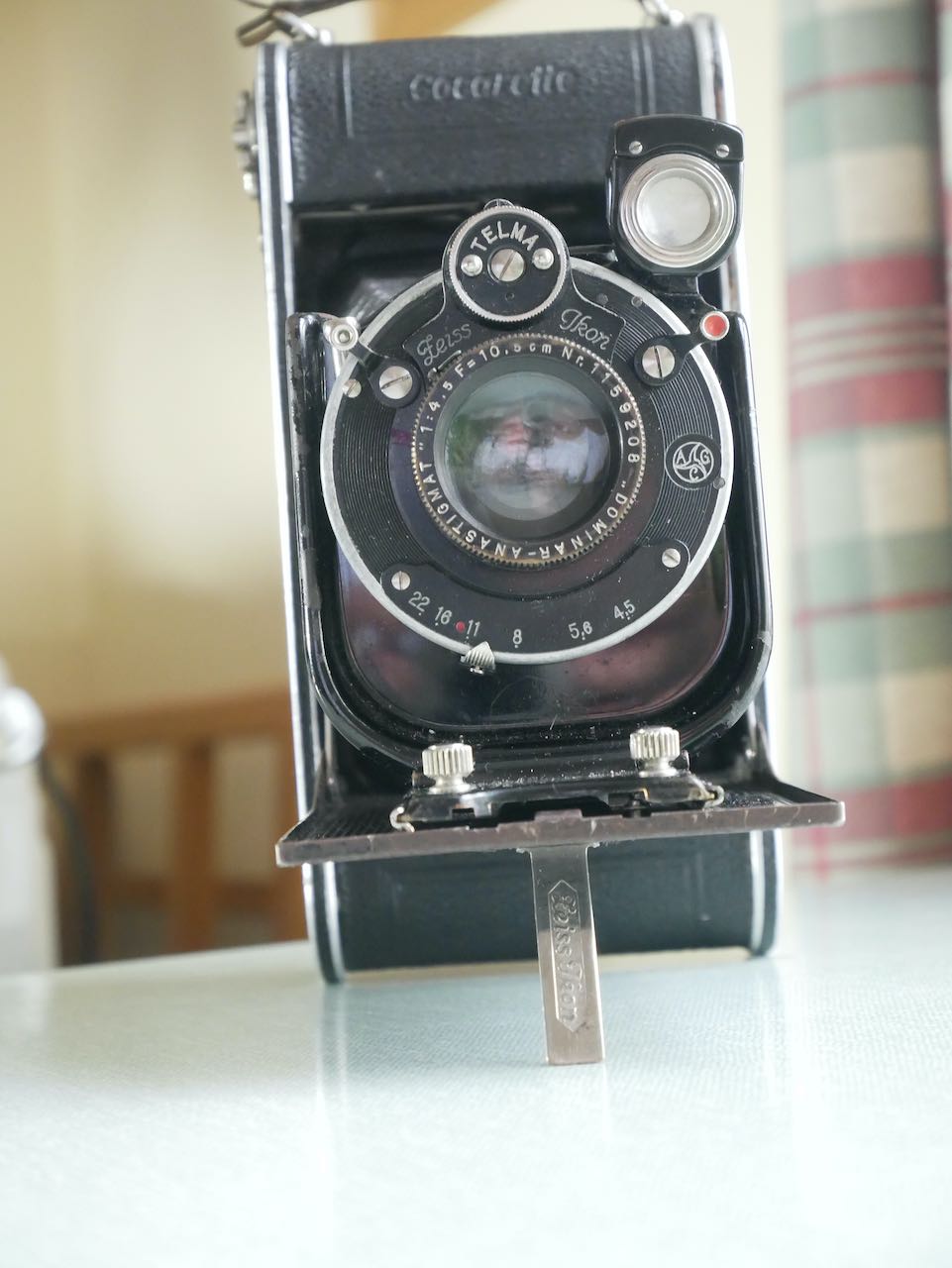 This Cocarette is a fairly standard folding camera from the early 20th century. The design was by Contessa Nettel in around 1920. When Contessa Nettel merged with other makers to form Zeiss Ikon in 1926, Zeiss Ikon continued to make Cocarette cameras until 1930 or 1931. My camera is the Zeiss Ikon version. Zeiss Ikon made an astonishing variety of the basic Cocarette design. Mine is the 514/2 version. The 514 thread used 120 film – or B11 as Zeiss Ikon called it – (other Cocarettes used other sizes of film) and the /2 part of the number in various Zeiss Ikon cameras produce eight 6 by 9 cm negatives so this camera produces eight 6 by 9 cm negatives on 120 film.

This is a nickel plated button within an oval ring. This button has two positions: A and Z. A is Auf which means, in this context, open. Z is Zu and Zu means closed. Both Auf and Zu have other meanings in German but in the context of a catch it is open and close. On my camera, pulling this cassette out is much harder than opening a hinged back. Mind you, my camera is 98 years old and has every right to be a bit stiff!

The removable side of the camera is made from aluminium alloy. The film cassette part is made from steel which is painted black. Most of the cassette consists of the film gate (the hole the light travels through to reach the film). The gate measures 90 by 57 mm – the size of the resulting negative.The film gate is rectangular but in one corner there is a semi-circular cut-out. This allows the user to see the frame numbers on the film through the red window on the camera back. Without the cut-out, the frame numbers would be obliterated by the steel framework.

The aluminium side of the film cassette has a sliding catch to secure the cassette in the camera body. All around the internal edge of the aluminium side is a velvet light seal – none of this Japanese malarky with foam that turns to goo.

Where the film cassette slides into the body, there is a box structure that the film cassette has to fit around. This box is open to the front of the camera and is where the bellows fit . On the visible part of this box (which is painted with black crinkle-finish paint) is the counter-point to the catch on the cassette. Also here is the button to release the lens board on the front of the camera. This button protrudes through a hole is the side of the cassette so it can be accessed when the camera is fully assembled.

The side of the camera which pulls away also has the film advance key. Around this is an arrow showing the direction of turning. The key will turn in both directions but turning it the wrong way is likely to cause problems. Next to the film advance key is the button to release the lens board. At the other end of the side is a tripod socket. This is the original 3/8 inch Whitworth thread.

The front of the camera has the lens door. This is made form pressed steel and has a second tripod socket – the same 3/8 inch thread as the other tripod socket. There is also a folding foot which can be used to stand the camera on a table or such for when using the self-timer.

The lens is a Dominar. This is a copy of a Carl Zeiss Tessar originally made by Huttig and subsequently by Ica. Ica was owned by Carl Zeiss who, presumably, made the lenses for Ica. Assuming this to be so, the lens serial number will date the lens to 1930. This tallies with the body serial number which also dates the camera to 1930. The lens focal length is 10.5 cm (measuring focal length in mm had to wait for the 1940s) which is normal for a medium format camera.

The available apertures range from ƒ/4.5 to ƒ/22 which is a good range for the date of the camera. The iris diaphragm consists of ten blades giving a decagonal aperture. This should give near circular bokeh if such things matter to you. The focus range is from 1.5 m to infinity. The camera has helical focusing. Many folding cameras of this age and older have a focus slide which was not an accurate method. This helical focusing (where you turn the lens to focus) is capable of much greater accuracy.

When looking at the lens, there is a lever at around 10 o’clock which is the shutter release lever. Behind this is a threaded socket for a standard cable release. In fact, this standard cable release socket and conical thread was originally designed by Gauthier, the makers of this shutter.

One response to “Zeiss Ikon Cocarette 514/2”