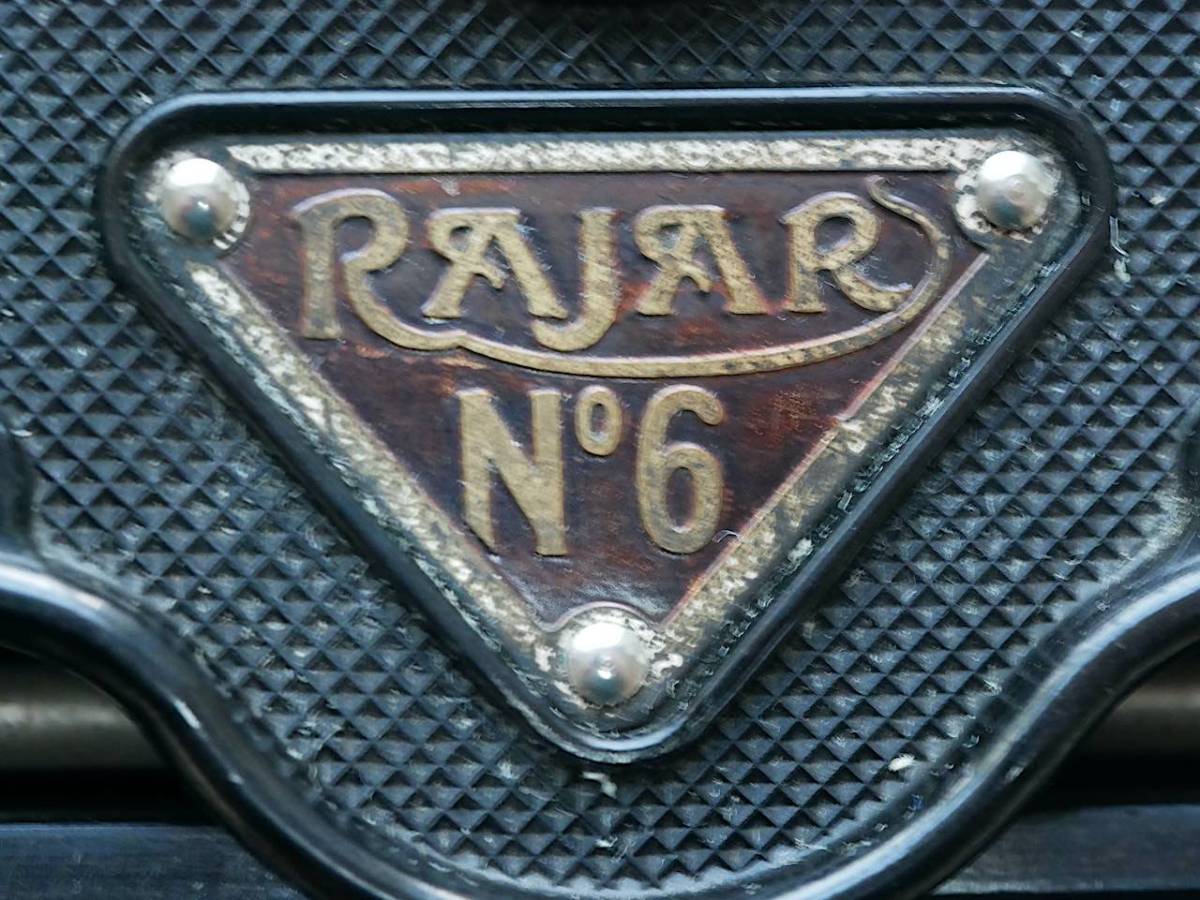 This is another Bakelite camera – my others are the Soho Model B and the VP Twin. The later Soho Model B design is clearly derived from this Rajar No 6 – they even use identical struts. This camera appears to have been designed in 1929 and is an Art Deco design. It was made by APeM – this company had a chequered history and part of it ended up as Soho Ltd, the makers of the Soho Model B mentioned above. The camera measures 167 by 90 by 38 mm when closed and 167 by 90 by 115 when open for use. It weighs 450 g.

As mentioned earlier, this camera is made from Bakelite, one of our earliest plastics dating from 1907. The Bakelite is black (many other colours of bakelite were available) and the body is rectangular with only the ends being curved. There are a few parts not made from Bakelite. The struts holding the lens board in place, the metal wires holding the back in place and there is a metal chassis behind the Bakelite lens board and a few rivets.

All the controls apart from the film advance key are on the lens board – not that there are many controls: only one shutter speed, one aperture and a fixed focus lens. So, the camera body is an unadorned rectangular box with curved ends. The only ornamentation on the front are two rectangles, one above and one below the lens board. The back has eleven parallel grooves. These are broken at the top by a curved box bearing the legend “ONLY RAJAR NO 6 SPOOL WILL FIT THIS CAMERA”

Towards the other end of the back is the circular red window for viewing the frame numbers on the film backing paper. although this window would have been a very definite red when new it has faded over the last 90 years to a pale orange. At the other end of the body to the red window is the film advance key. This is made from nickel plated brass and has a slight twist to it to make it fit the hand better.

To use the camera, it is necessary to extend the lens board. this pulls out and is held on four folding struts. It is a little hard to start it moving but once it has moved a bit it is easy to pull out to its final position. The four struts hold the lens board securely in place and parallel to the film.

The lens board is essentially rectangular with a curved cutaway at the top for a finger grip when extending the camera. At the bottom of the lens board is a semi-circular extension which has no function – it is entirely decorative.

In the centre of the lens board is the lens and shutter. The lens is a meniscus lens – one piece of glass – and is not usually visible as it sits behind the shutter blades. I am told by Collection Appareils that the lens has a focal length of 85mm and a fixed aperture of /12. This is a rather small aperture but is needed to give the required depth of field to compensate for the non-focusing lens.

The shutter is a very simple everset shutter offering just one speed –I – and timed exposure – T. deferring again to Collections Appareils, I (for Instantaneous)gives a shutter speed of between 1/50 and 1/30 seconds. This is not a precise speed and nor does it need to be. this camera relies on the film’s exposure latitude to produce usable pictures.

Beneath the lens on the lens board is a triangular plaque bearing the legend “RAJAR No 6”. This looks as if it was originally silver and red but now is mostly murky brown.

At the top of the lens board is a 7 mm (actually 3/10 inch as this is a British camera) hole behind which sits the viewfinder. This is a Brilliant finder which I never really like. this one is marginally better than the run-of-the-mill Brilliant finders as the top piece of glass is ground glass rather than the usual plain glass which gives a clearer (but not clear) image. This Brilliant finder is on a swivel so you can move it through 90º for when you are taking landscape pictures.

The back is held in place by two sturdy wire clips. These are a very tight grip and require significant effort to remove. When they have both been unclipped and moved to the front of the camera the back comes away in one piece.

The inside of the back is completely plain – no advice as to film, no patent numbers, no nothing. The only feature is a cutaway near one corner to allow for fitting around the film advance key.

The inside of the body is dominated by the film gate. This measures 82 by 56 mm which is about what you would expect from 120 film but this camera uses Rajar’s own Rajar 6 film. My camera has an empty spool in it and I can measure the width of the backing paper which is 62 mm. It would seem like Rajar No 6 film is the same as 120 film although the Rajar spot is very different. The Rajar spool has an extension on one end with a square hole for the film advance key. Apparently, adapters were available to allow 120 film to be used.

Neither the film spool nor the take-up spool are fixed in any way. The only concession to the spools moving is a nickel-plated leaf spring in each spool chamber which will be mostly about keeping the film snug on the spools.