A small, light, 35mm film camera made in Germany for a British company – RF Hunter. 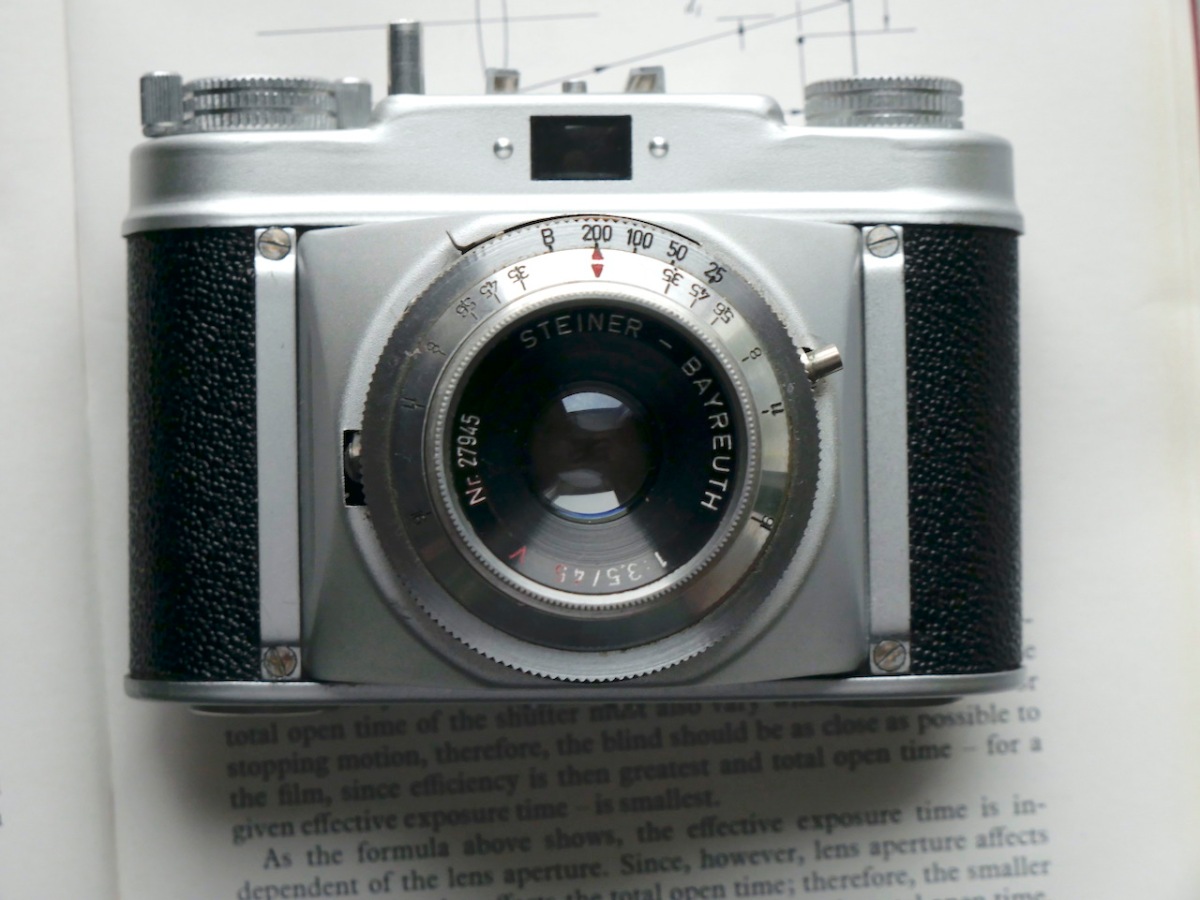 This is a compact 35mm camera that literally fits in my hand. R.F. Hunter were a distributor rather than a maker and are better known (but far from famous) for the Purma Special camera but they also distributed Franka and Rolleiflex cameras and Schneider lenses in the UK. So, Hunter did not make this Hunter 35 camera which was made by Steiner-Optik of Bayreuth in Germany. It is, actually, a rebadged Steinette camera, made in 1957 or 1958.

As I mentioned above, this camera is small. It measures 105 by 75 by 70 mm and weighs 333g. The camera is made from Bakelite, an early plastic, with satin plated metal top and bottom plates and the shutter/lens mount.

As the camera has a leaf shutter, there are very few controls on the top plate. On the far right of the top plate is an arc-shaped window onto the frame counter. Every fourth number is displayed with intermediate frames being represented by a line. This needs to be reset when loading a new film by using something fine and stiff – I used a penknife – to rotate the counter anti-clockwise. Just beside this is the film advance knob. This is fairly small – 18 mm diameter – and has two pillars, one either side, to aid turning the knob. This arrangement works very well and it is possible to turn this knob with just the thumb of the right hand. The knob sports two arrows to indicate the direction of turn, not that it is possible to turn it the wrong way.

The centre portion of the top plate is slightly raised – by about a couple of millimetres. On the front right of this raised portion is the shutter release button. This is a simple metal pillar and it is threaded for a standard cable release.

On the rear of the top plate is the viewfinder eyepiece. This is small – 5 mm diameter – as was usual in the 1950s. This is a reverse Galilean finder – the image is smaller than life size. There are no bright lines or other compositional aids here. On the right of the eyepiece is a small serrated lever. Moving this to the left and in will allow you to rewind the film. The front of the top plate is just the viewfinder window. This measures 11 by 7 mm.

The front of the camera has the shutter/lens housing right in the centre. There is a pressed metal hood which protrudes 22 mm from the body to hold the shutter/lens in the correct place. This has the legend “Hunter 35” stamped on the top in Italic script. The shutter is anonymous and I suspect Steiner’s own make. It is a simple everset shutter offering four speeds: 1/25, 1/50, 1/100 and 1/200 seconds plus B. The shutter release lever is visible on the right hand side of the shutter housing where it immediately dives into the metal hood mentioned earlier to connect with the shutter release button on the top plate. Also on the shutter housing is a PC-socket for flash. There is no indication of whether this is M or X sync but for a cheap camera in the 1950s, I doubt the user would be buying an electronic flash gun so my guess is it is M sync.

The available apertures on the lens are from ƒ/3.5 to ƒ/16 which is a reasonable range for an amateur amera. The lens is a Steiner lens – it has no specific name – which is a triplet with a focal length of 45 mm – which is normal for 35mm photography. Steiner are a reputable maker of lenses and still have a good business making binoculars. The focus range for this lens is three feet to infinity. The minimum focus distance on the focus scale is 3.5 feet but the lens will move quite a bit beyond this. Beside the focus scale is a depth of field scale which is something I very much miss on modern autofocus lenses.

The back of this camera is unusual in as much as it does not open – film loading is through the base, much as an early Leica. What there is on the back is a printed exposure guide. This is basically variations on the Sunny 16 rule which generally works very well. Four options for film speed are given – in both ASA and DIN. These are: ASA 10-16 or DIN 11-13, ASA 32 or DIN 16 (both expected to be colour films which were much slower than monochrome films in the 1950s), ASA 50-80 or DIN 18-20 and ASA 100-200 or DIN 21-24 (both expected to be black and white films). There are also four weather options giving a grid of aperture options. This chart assumes a shutter speed of 1/50 seconds which is rather slow for hand holding the camera.

The access to the inside is by removing the base. The catch is in the centre of the base. This is a disc with two studs. While the studs are in line with the base, the base is locked. Rotating the disc through 90º anti-clockwise moves the studs across the base and one stud is now by the stamped “O” (for open). The base now lifts off. One end of the base has a standard 1/4 inch Whitworth tripod socket.

I have run a test film through this camera – Agfa Vista as usual – and now have the results. First, the positive: The camera works well for a cheap camera and the lens, although not brilliant, is quite good for family snapshots. Now the negative: there is a light leak on every frame. This is right on the right hand side of the image (so the left hand side of the negative) and could easily be cropped out if I wanted to use this camera.

To estimate the exposure, I used the table on the back of the camera which is basically the Sunny 16 rule. This has worked well. There is a dark bar at the top of each image which makes me thing that the film gate is slightly smaller than the standard 24 by 36 mm.

Here are are few images from the test film: