This is large and heavy SLR fillm camera from Chinon. 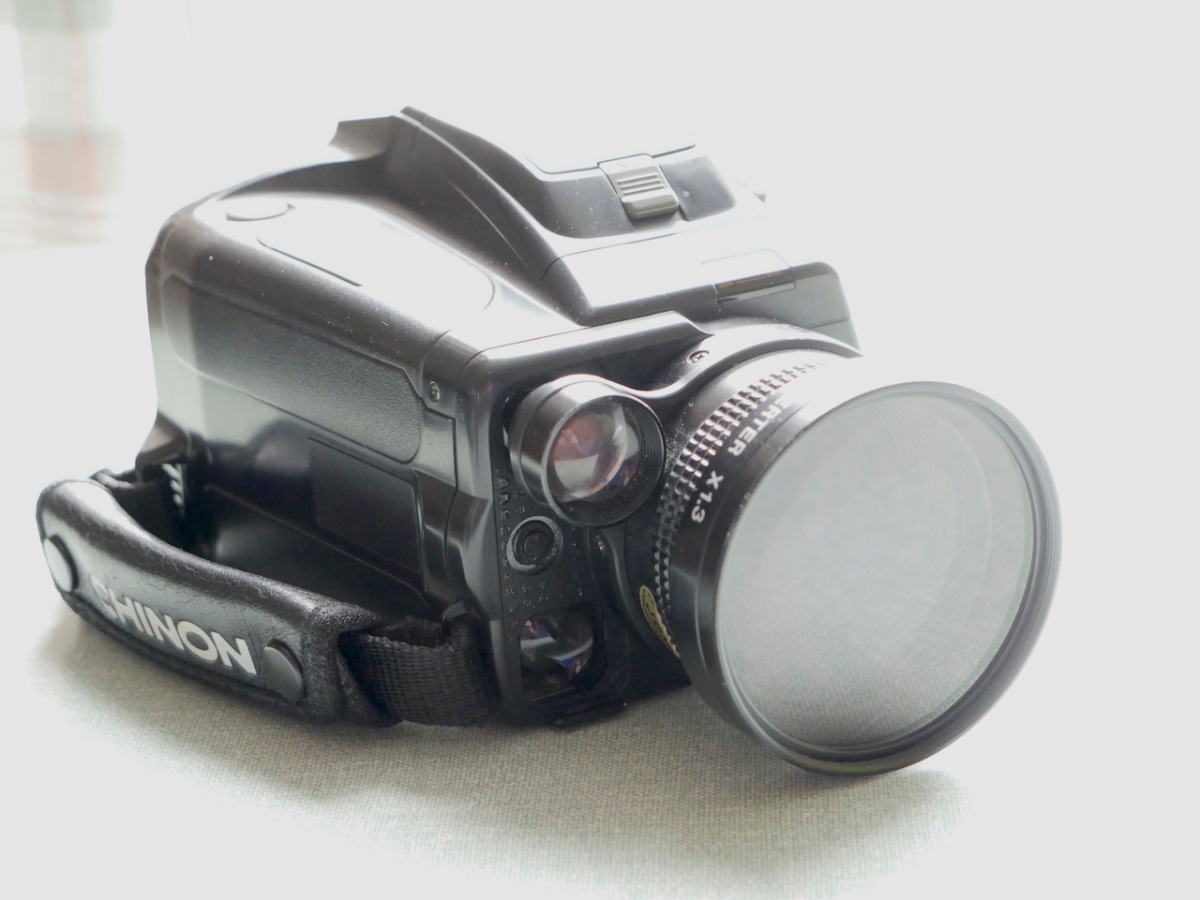 This camera is a child of the 1980s. Every part of its design shouts out that decade. It is big, black and cumbersome. The basic design concept seems to come from 1980s video cameras. In fact, this camera was introduced in 1988 and continued in production until late 1990. It is designed for one handed (right hand only) operation so is a disaster for the 10% of people who are left handed.

This Genesis camera is an electrical/electronic camera and the controls are all electric switches. This means that the controls are positioned as suited the camera designer. In fact, as a fully automatic camera, there are few controls at all. This camera has no manual operation facility and so no manual controls. The camera measures 120 by 120 by 90 mm and it weighs 750 g.

The first thing that I need to mention is how you hold this camera. There is a horizontal hand strap on the right hand side. Your right hand slips up between the strap and the camera body, leaving your thumb around the back of the camera where there is a circular depression to aid your grip. The shutter release button should fall to the user’s index finger but I find this a bit awkward. Of course, the size of the user’s hand makes a difference here. Holding the camera one handed this way is quite comfortable and stable. The shutter button is nicely responsive.

In the centre of the top is the folding flash gun. In front of this flash gun is a grey slider. Pushing this forward both raises the flash gun and powers on the camera – the actual power switch is in the hinge of the flash cover. When using this camera, the flash gun is always raised and powered.

To the left of the LCD screen are two banks of switches. The right hand bank has three buttons. These are labelled ‘M. EXP’, ‘SELF T’, and ‘BLC’. ‘M. EXP’ sets the multi-exposure mode. This will allow you to make up to three exposures without advancing the film. ‘SELF T’sets the self timer mode. With this set, there is a ten second delay between pressing the shutter release button and the shutter firing. ‘BLC’ sets the Back Light Compensation mode (and starts the square on the LCD screen flashing). In this mode, the camera allows for a strong backlight to achieve a good exposure.

The left hand bank is a sliding switch with two positions. In the forward position – single – the camera will take single shots only (or two in Multi Exposure mode) and in the backwards position – continuous – it will take up to three shots in succession.

Down the left side of the camera is a dark grey area. Thee are four items on this grey area. Near the top is a hole which is threaded. There is no indication as to what this is for. The manual says that it is to connect a flash slave unit. This is the electrical connection. Below that is a sprung slider. Sliding this upwards uses the flash as fill-in flash even in generally good light. Sliding this down switches the flash off. it is necessary to slide and hold this switch or it will default to off. Beside this switch second hole. Pushing a ball-point pen nib or such into this hole forces the camera to rewind the film even if it is not at the end. The fourth item is a small catch to open the camera back.

On the left, the main camera body is curved – it is basically the lens barrel. This has a vertical slider which zooms the lens. Three focal lengths are marked – 35, 50 and 80 mm. There is also a macro position for close focus. To achieve the macro position, it is necessary to depress a green button on the slider. This is not ‘true’ macro as it does not give a life size image on the negative.

The lens itself has eight elements in seven groups (information courtesy of the genesis manual). It is not a very fast lens – the maximum aperture is ƒ/4.1 at 35 mm and ƒ/6.4 at 80 mm. The lens focus is entirely automatic and there is no manual option. The autofocus works on infra-red light. There are two autofocus windows which are covered by a plastic fascia beside the lens. Looking into the lower of the two lenses (after removing the fascia) while operating the camera, you can see a flashing red LED. Looking into the top lens in the same way, there is a black sideways ‘H’ which I take to be a sensor of some sort.

The lens will focus from 0.85 m to infinity. If you use the inbuilt macro facility, the lens will focus down to 0.5 m. Chinon produced a 1.3X teleconvertor which extended the focal length to 105 mm. This fits onto a bayonet on the front of the lens and includes a secondary lens on the right which fits over one the two autofocus lenses mentioned above to recalibrate the autofocus system. If you try to use the teleconvertor below 65 mm focal length, the image is subject to severe vignetting.

The base of the camera is sparse. There is a 1/4 inch UNC thread tripod socket. This is right at the back of the camera and in line with the lens. Also on the base is the battery compartment. To open this you need to push a ball-point pen nib into the hole which allows the compartment lid to slide open. The required battery is a 2CR5 which is still available and rather expensive.

The back of the camera is also sparse. Above the opening back is the viewfinder eyepiece. This is a reasonable size. Inside the eyepiece is the focus screen. In the centre is a disc of micro-prisms. These have a dual purpose. Firstly, they indicate the area of the image that the autofocus system works on. Secondly, there is a small amount of manual focus possible when the zoom setting is on Macro.

To the left of the focus screen are two LEDs. On the top is a red lightning flash. While the flash gun is charging this LED flashes. When the LED is steady, the flash gun is ready for use. Below this are the letter AF in green. These appear when the lens is focused. When the lens is not focused, the AF LED is not lit and the shutter will not fire.

The opening back has a small window on the left. This is so that the user can see the film cassette as a memo of the film that is in use.

Inside is reminiscent of a Contaflex or Bessamatic from around 1960. The film cassette sits in a chamber on the left. This chamber has four pairs of electrical contacts which are there to read the DX code on the cassette. The DX code tells the camera about the film speed and film length. If you use a film cassette with no DX code (such as when you use bulk film), the camera assumes a film speed of 100 ISO.

In the centre is the film gate. This is the bit that is like a Contaflex – there is no focal plane shutter. Instead, there is the sloping reflex mirror. As well as reflecting the image up into the viewfinder, the mirror also acts as a light tight baffle to prevent fogging of the film while the actual shutter is open.

Shutter speeds available are from 1/4 seconds to 1/300 seconds – not a very large range for 1988! Below the film gate is a small sprocket whee. this takes the place of the more usual sprocket shaft and is there to count the sprocket holes in the film to measure one frame when advancing the film. Film loading is automatic. You pull out the film leader until it is just short of the hinge for the back, close the camera and switch it on. The leader will wind onto the take-up spool and the film will be advanced to the first frame. When the film has all been used, the film is automatically rewound into the cassette – all the way in with no leader protruding.

This is an easy camera to use, even just one handed. It is, however, a bit on the large size and gets in the way if photography is not your main activity. I used it with the hand strap provided which meant that one hand was permanently occupied. There is provision for attaching a neck strap instead of the hand strap which would free your right hand but of the cost of a large weight around your neck.

This camera is just too big and too heavy for the casual user and too limited for a serious photographer.

I have run a test film through this camera and I am awaiting the return of the film. I will post results here when I can.

OK, I now have the test film back from then lab – Agfa Vista, as usual – and this camera is performing very well. Exposure is spot on as is focus. There are no light leaks.

Some images were shot in rather dull weather and others in bright March sunshine. The camera has coped with both of these quite well. The first image shows what happens if you use the supplied teleconverter with the cameras lens set to 35mm – Chinon recommend you use the teleconverter with the zoom set to between 65 and 80 mm to avoid this vignetting. The second image was shot using the lens’ macro facility.