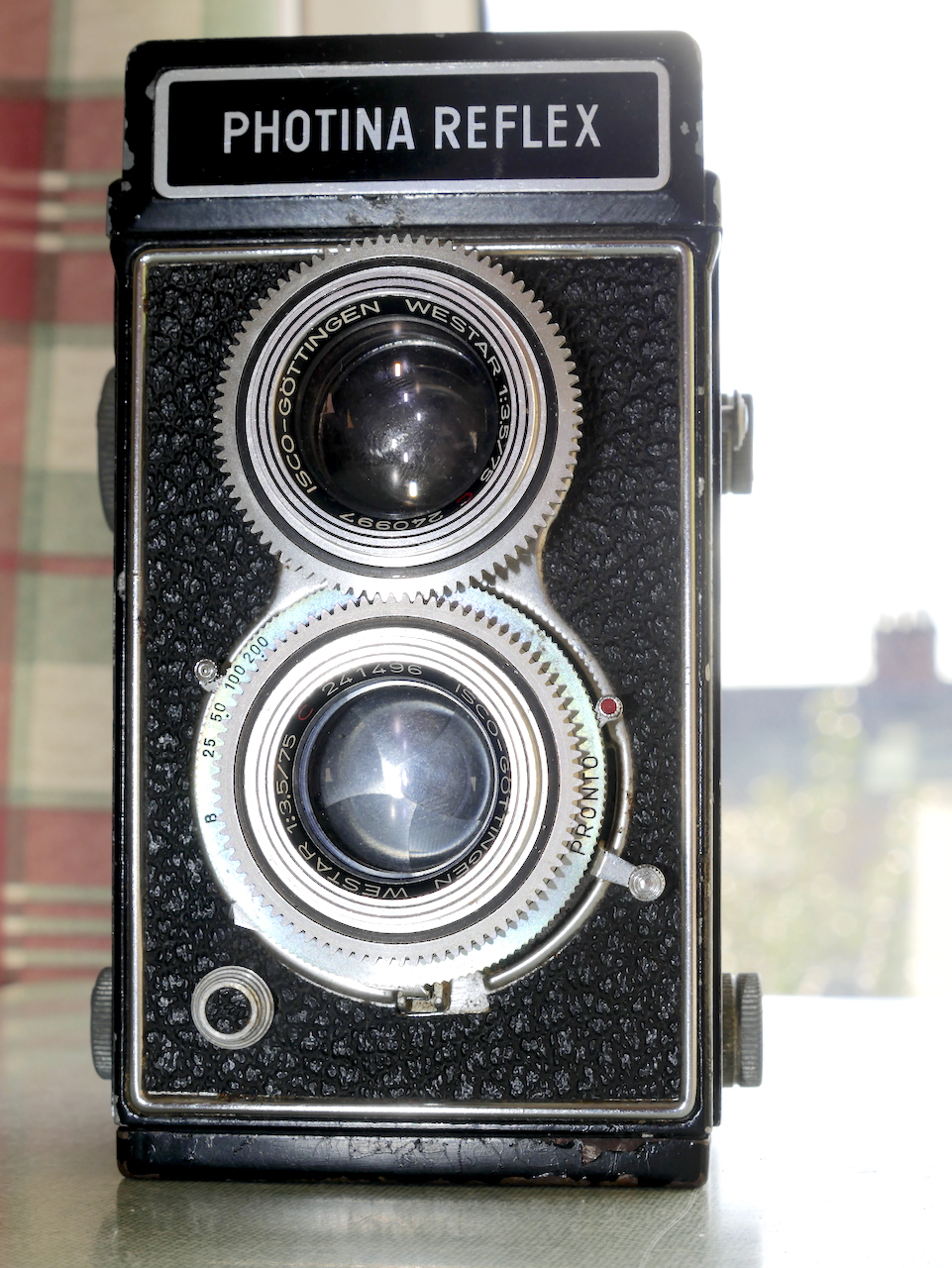 The Photina range seems to have been modelled on the Voigtländer Brillant range. The first two Photina cameras were pseudo-TLRs – they look like a proper TLR camera but the upper lens is a static viewfinder (essentially a very large Brilliant finder). This Photina – the Reflex – is like the last Voigtländer Brillants in as much as it is a true focusing TLR.

This is a cheap camera and definitely not in the same league as a Rolleiflex or Ikoflex. The main body is made from cast aluminium and the back and the base are made from pressed steel. As a TLR, the camera is basically a box with two lenses on the front surface. The box measures 140 by 73 by 78 mm and the lenses protrude a further 28 mm. The camera weighs x g.

The front of the camera has the two lenses and the shutter. The top lens is the viewfinder lens and the bottom lens is the exposure lens. With this camera, both lenses are the same – with most TLR cameras, the viewfinder lens is of an inferior, cheaper, design as slight aberrations are not important. The lenses are Westar lenses made by ISCO-Göttingen. “ISCO” stands for “Iosef Schneider Co.” – Josef Schneider being the founder and owner of the older Schneider-Kreuznach who are still a major lens maker in Germany. I am not sure of the original relationship between the two lens makers but today (2020) ISCO is a subsidiary of Schneider-Kreuznach.

The Westar lens would seem to be a triplet – I would not expect a top design of lens on a cheap camera such as this one. Triplets usually perform very well for general photography once stopped down to ƒ/8 or so. The maximum aperture here is ƒ/3.5 – again, much as I would expect on a camera like this one. The focal length is 75 mm which is normal for 6×6 negatives.

On most TLR cameras, focus is achieved by moving the front plate of the camera to and fro. This requires significant manufacturing finesse and on these cheaper TLR cameras focus is achieved by turning the lenses on a helical screw. As both viewfinder lens and taking lens need to focus exactly the same, the two lenses are linked by toothed rings. You can focus by turning either lens – it makes no difference which – but I find it easier to turn the top, viewfinder, lens with my two forefingers. Because the lenses are directly connected by the toothed rings, they turn in opposite directions. To focus from infinity to close, the top lens turns clockwise and the taking lens anti-clockwise. The focus range is from 3.5 feet to infinity – there is no metre scale as this is an export camera intended for the British market.

The focus scale is on the top, viewfinder, lens (the only place that the photographer will be able to see it while photographing) and is adjacent to a depth of field scale in red.

The other controls are around the lower, taking, lens. The controls here are aperture, shutter speed, self-timer, cocking lever and shutter release. This camera has a leaf shutter with the shutter blades between the glass elements of the lens. The shutter is a Pronto by Gauthier of Calmbach, Germany. The pronto shutter was one of the two bottom-of-the-range shutters offered by Gauthier in the 1950s. It offers four speeds (1/25, 1/50, 1/100 and 1/200) plus B. It also has a self-timer.

On the left of the shutter housing are two levers. The longer lever is the aperture setting lever. The smaller lever here, with a red tip, is the self-timer lever. It is standard advice to never use these on old cameras as if they fail internally they will stop the shutter mechanism from ever working. On this camera, the self-timer produces a delay of 11 seconds. Gauthier shutters usually produce an 8 second delay – the difference I will put down to age.

The left side of the camera has two retractable knobs which hold the film spools in place. There is also a second lug for attaching the neck strap. In the top front corner of the left side is a PC connector for flash. The base of the camera is plain apart from a tripod socket. This is the small camera standard of 1/4 inch Whitworth thread (it is a bit early for the modern 1/4 inch UNC thread).

The back of the camera has the usual (for 120 format cameras) red window. This window is used to read the frame numbers printed on the film’s backing paper. This camera produces 60 by 60 mm negatives so will get twelve negatives from each roll of 120 film (which film is still readily available).

To load film – or remove exposed film – it is necessary to open the back of the camera. At the top of the back is an aluminium slide. To prevent this from moving unintentionally, there is a small metal button on the left of the slide. This must be pressed in before the slide can be slid to the left. The back and base they come away in one piece. The back/base is made from pressed steel.

new rolls of film fit into a chamber in the base.The two knobs on the outside on each side must be pulled out to allow the roll of film to be fitted. There is a blued steel spring to hold the film tight on the spool. The film then passes over a black roller on the corner between the base and the back. The film gate is 56 mm square so this is the actual size of the negative; a bit smaller than the nominal 60 mm. Above the film gate is the chamber for the take-up spool. Again, the knobs on either side must be retracted to fit the take-up spool. For those not au fait with 120 film formats, the empty spool from the previous roll of film is used as the take-up spool for the next roll of film. There is another blued steel spring here to keep the used film tight on the sp[ool.

The top of the camera opens up to form the viewfinder. To open this, there is an aluminium button on th rear right corner of the camera. Pressing this button causes the viewfinder hood to spring up. On my camera, the front and sides spring up but not the rear part. This is because the front part is rather warped and the locating pins for the rear part no longer locate. It is easy enough to lift by hand.

For composition, you look down into the viewfinder. This is made awkward by the fact that the image is reversed left to right – a property of all waist-lever finders, not just this one. As you move the camera to the right, the viewfinder image will move to the left. It takes a while to get used to this but it does eventually become second nature.

To make focusing easier, there is a fold-out magnifier hinged from the rear of the viewfinder hood. The viewing screen is just plain ground glass – no micro-prisms or split image such as we would expect with an SLR camera. There are three blue lines on the viewing screen marked ‘1’, ‘2’ and ‘1+2’. I have no indication as to why these are here but I would guess that they relate to close-up lenses.

One thought on “Photavit Photina Reflex”

One response to “Photavit Photina Reflex”