This is an innovative English camera – I nearly said British but it is clearly labelled ‘Made in England’. It has several features I have never seen before on another camera and do not expect to see again. The camera is called a Purma – there is no indication as to who made it. McKeown’s and the Hove Blue Book both say that this camera was made by R.F. Hunter in London but information on the Interweb suggests that Hunter’s only sold the camera. Camera-Wiki on the Interweb says that this camera was made by Purma Cameras Ltd.

The body of the camera, and the removable back, are made from Bakelite which was an early plastic. The insides are made from matt-black steel. The Bakelite is an amazing, sturdy, if brittle, plastic. In this case, the Bakelite is very nearly black (actually, very dark brown) even though my photographs show it looking decidedly blue. The Bakelite was dull and not very interesting when I got the camera but five minutes with a can of aerosol polish and this camera looks impressive and almost new.

The only beef that I have with the exterior is that a it was not designed by a photographer. While it all works, nothing is where a photographer would want it to be – I think engineering needs were more important.

The cross-section is rhomboid with two very curved ends. Its maximum dimensions are 6.75 by 2.75 by 2.25 inches (it is an English camera so I am using English units; sorry,  metric people), not including the lens. The lens protrudes 3/8 inches when closed and one inch when open for use. The camera weighs 12 ounces. The camera uses type 127 film which is no longer made but it can still be found for sale on the Interweb. The resulting negatives are 1.25 inches square (31 mm).

Such controls as there are (three of them) are on the top of the camera. All are made of Bakelite. On the right is the film advance knob. This has a milled edge and can easily be turned with your thumb. Near the middle, at the front, is the lever for cocking the shutter. This lever is pear-shaped. The lever needs to be pushed to the left to cock the shutter. On the top at the left is a pear-shaped recess. In the deepest part of the recess is the shutter release button. Ergonomically, this is not a good position. This button is also Bakelite.

On the front, beside the shutter cocking lever, is the viewfinder window. This is 1/4 inch square (approximately 6 mm). In 1936, this was a normal size for most cameras. It is certainly usable and more than adequate for snap shots of families and holidays which is the intended market for this camera. Below the viewfinder window is the legend “PURMA SPECIAL” In the centre of the front is the lens. There is no shutter housing as this camera has a focal plane shutter. When not in use, there is a screw-in lens cap. Not only does this protect the lens but it also pushes the lens into the body, making the camera more pocketable and also acts as a shutter lock to prevent unwanted photographs. When the screw-on cap is removed, the lens pops out for use.

The lens is made by Beck. They are no longer a well known name in consumer optics but are still in business as Beck Optronic Solutions Ltd. Beck were a major player in camera lenses back in the day. When I was a boy in the 1950s, my father’s microscope was a Beck. The lens has a focal length of 2.25 inches which is about 60 mm. A ‘normal‘ lens for this camera would be 42 mm so this lens is significantly long for the film format. The minimum aperture is ƒ/6.3. Actually, this is not the minimum aperture, it is the aperture as the aperture is not adjustable. The lens is also fixed focus, so I would imagine  that the lens is pre-focused at the hyperfocal distance. Usually, cameras with a fixed focus lens have a lens that has a shorter focal length than ‘normal’ focal length to give a larger depth of field, so using a longer focal length is a bit strange. 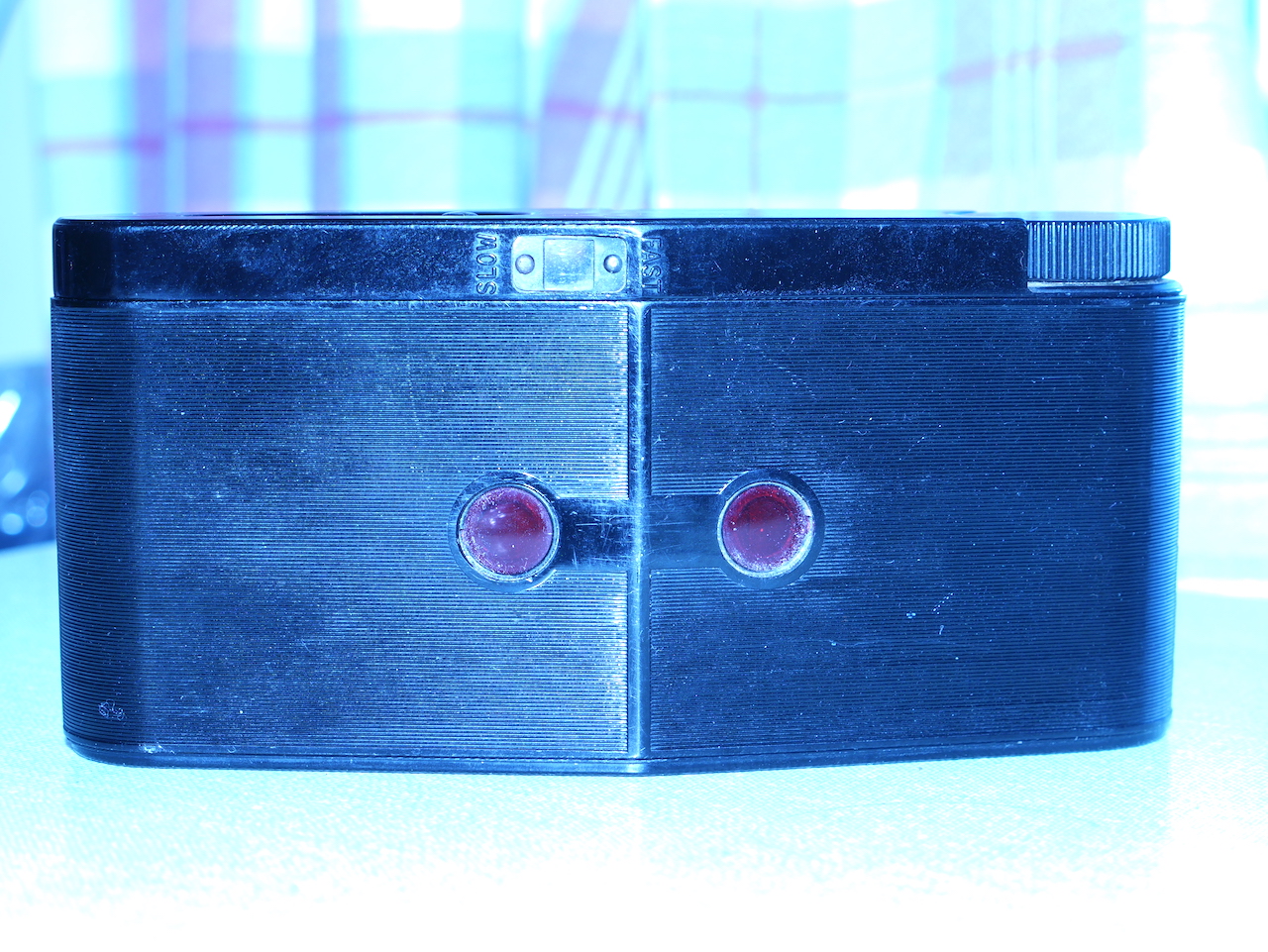 The back of the camera is also rather plain. At the top, just left of centre, is the viewfinder eyepiece. This also is 1/4 inch (6 mm) square, the same as the viewfinder window. This is a reverse Galilean finder – the viewfinder image is much smaller than life. It is also very bright and clear. 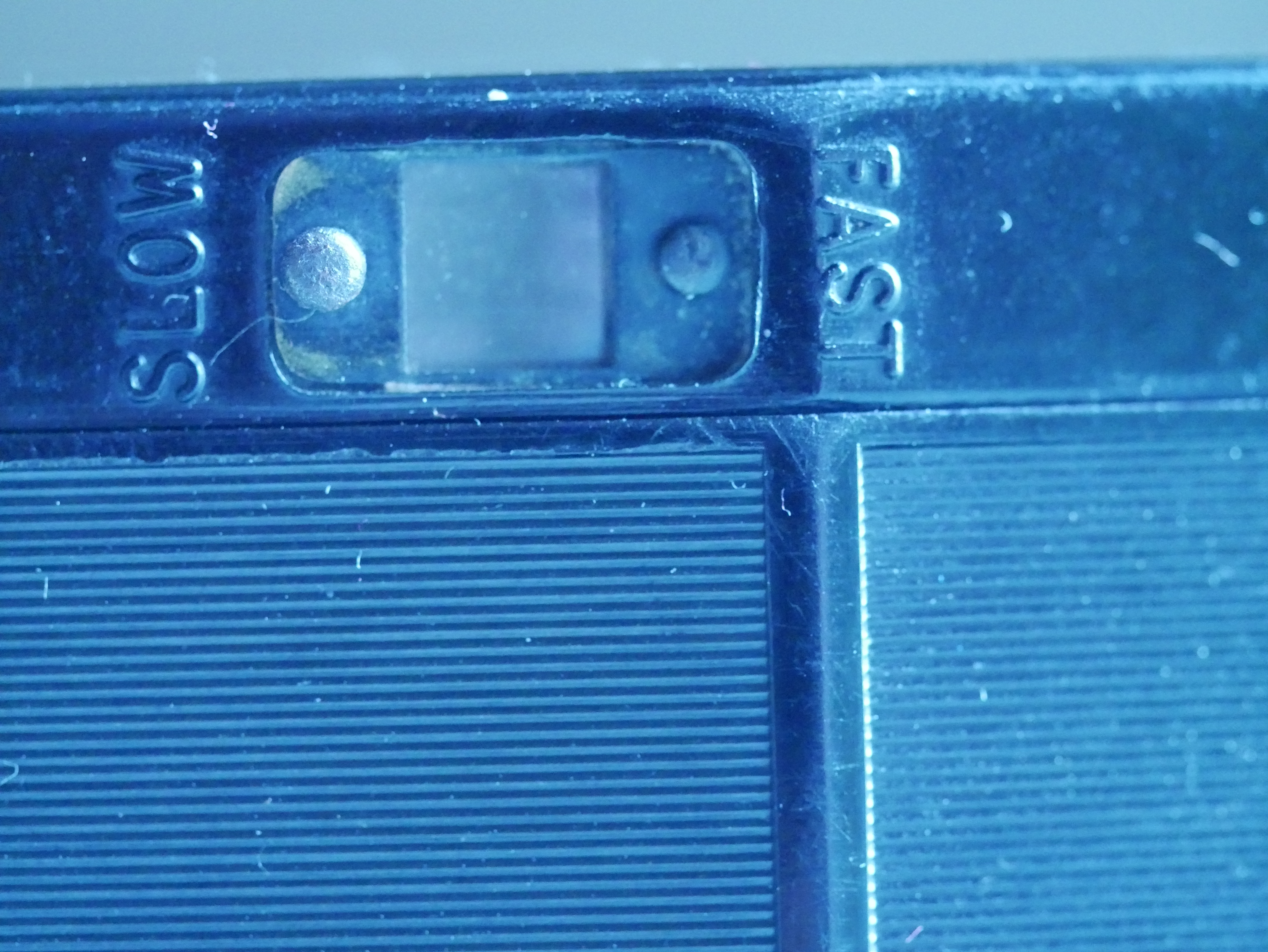 In the middle of the back – horizontally – are two red windows. These are there so that you can see the frame numbers which are printed on the film backing paper. There are two red windows because this is a half-frame camera and each frame number needs to be used twice. As you wind on the film, you stop winding when the number 1 is centred in the left window. For the next picture. you stop winding with the number 1 centred in the right hand window. Then the number 2 in the left window, 2 in the right window and so on. This should give you 16 exposures on a roll of film.

The base of the camera is completely blank. There is no tripod socket on this camera.

The back of the camera is not hinged, nor is there any catch. The back is held in place by a small metal spring at each end. This does not work very well on my camera and the back sits slightly proud at one end. In the middle of the inside of the back is a pressure plate which is hinged at one end. It is important to replace the back with the hinge towards the new film or the unhinged end will slide between the film and backing paper as the film is wound on.

The film gate is curved in one piece of mild steel plate which runs from one spool to the other. In the middle of this plate is the actual film gate which is 1.25 inches (31 mm) square. Behind this is the innovative shutter. As this is a focal plan shutter, the shutter speed is regulated by the width of a slit. The next three photographs show the shutter slit width for fast (wide slit) medium (medium slit) and fast (narrow slit).

The width is controlled by a circular brass weight (not usually visible). As you rotate the camera, this weight rotates and moves the adjustable part of the shutter to give the required slit width.

storytelling the world through travels & books