This is a simple compact camera from the old East Germany (technically, the German Democratic Republic or DDR). Outwardly, it is very similar to a Braun Paxette. My overall impression of this camera is of a nicely designed and made cheap camera.

The camera measures 115 by 72 by 67 mm and weighs 360 g. This camera is not as heavy as you might expect. This is because the camera is made from what looks like Bakelite with a metal fascia. The top plate is either satin stainless steel or anodise aluminium. Scratching the surface does not reveal the usual brass and the metal is resistant to a steel knife so I am going to say that it is stainless steel (unless someone wishes to correct me).

This film advance merely moves the film – it does not cock the shutter or interlock the shutter release button. On top of the advance knob is a film type memo. This offers a choice of film speeds (strictly in DIN) of 13, 17, 21, and 25. These are repeated for colour film. There are also a further two options – sunlight or artificial light. This is strictly a memo and it has no effect on the operation of the camera.

In the centre of the top plate is a raised portion that houses the viewfinder. This is very small by modern standards but is close in size to other 35 mm cameras from the 1950s. The eyepiece measures 5 by 2 mm and includes a parallax adjustment. The eyepiece can slide up and down a small amount. For near photographs (i.e. portraits) you slide the eyepiece up to the ‘N’ position (N = nah) and for far photographs (i.e. landscapes) you slide the eyepiece down to the ∞ position (∞ = infinity). This is something that Balda did from the 1930s but was never usual, most camera either not bothering or relying on bright-lines. On top of the viewfinder is a standard accessory shoe (which has no electrical contacts and so is a cold shoe).

To the left of the raised portion of the top plate is the rewind knob – there is no attached lever or crank. To rewind the film, there is a sliding switch below the film advance knob/lever which needs to be moved from T to R (these are the initial letters of German words, which words I do not know). While holding the slide at R, you need to pull up the film advance knob – this frees the internal mechanism to rotate backwards. The rewind knob can be pulled up to ease rewinding and then pulled up further to ease removal of the film cassette. When you pull up the rewind knob, you can see two pillars which rotate to reset the frame counter. The frame counter window is on the back of the top plate, below the rewind knob.

The front of the camera has a square bright metal mount measuring 60 by 50 by 10 mm. On the top of this, on the right, is the shutter release button. This is chrome plated and is threaded for a standard cable release. In the centre of the mount is the shutter/lens assembly.

The shutter is a Junior II which is a simple everset shutter made by Gebruder Werner. The shutter bezel carries a logo of GW in a cartouche. Also on the shutter bezel is a triangle containing a 1 – this indicates first quality and appears on East German goods intended for export. Three shutter speeds are offered: 1/30, 1/60 and 1/125 together with B. Three speeds is about all you will get with an everset type shutter.

The iris diaphragm has ten blades which give a nicely circular aperture. Apertures from ƒ/3.5 to ƒ/22 are offered. F/8 has a red dot by it which is a Happy Snapper setting. This is used in conjunction with the distance scale which has two red dots on it. The first red dot is at 5 m. With the aperture set at ƒ/8 and the distance at 5 m, everything from 2.5 m and infinity will be in focus. The second red dot is just shy of 2 m. At this distance – the aperture still at ƒ/8 – everything from 1.4 m to 3 m will be in focus. The first, at 5 m, is intended for easy group portraits and the second, at 2 m, is intended for easy individual portraits.

The lens focuses from just short of one metre to infinity. This is front cell focusing where only the front piece of glass moves to focus the image. While this is not ideal, it will be fine for the uses that this camera was intended for. The lens is a Meyer-Optik Trioplan. As the name suggests, this is a triplet lens and has a focal length of 45 mm. 45 mm is ‘normal‘ for 35 mm photography. The serial number is 2630098. The lens bezel also carries the 1 in a triangle mark indicating that it also is of export quality.

Also on the shutter housing is a PC flash connector. There are no synchronising options but the manual says that it is X synch. As this is a leaf shutter, the flash can synch at all shutter speeds (all three of them!).

The base of the camera only has the tripod socket on it. This is a 1/4 inch Whitworth thread. The rear of the camera is also featureless, 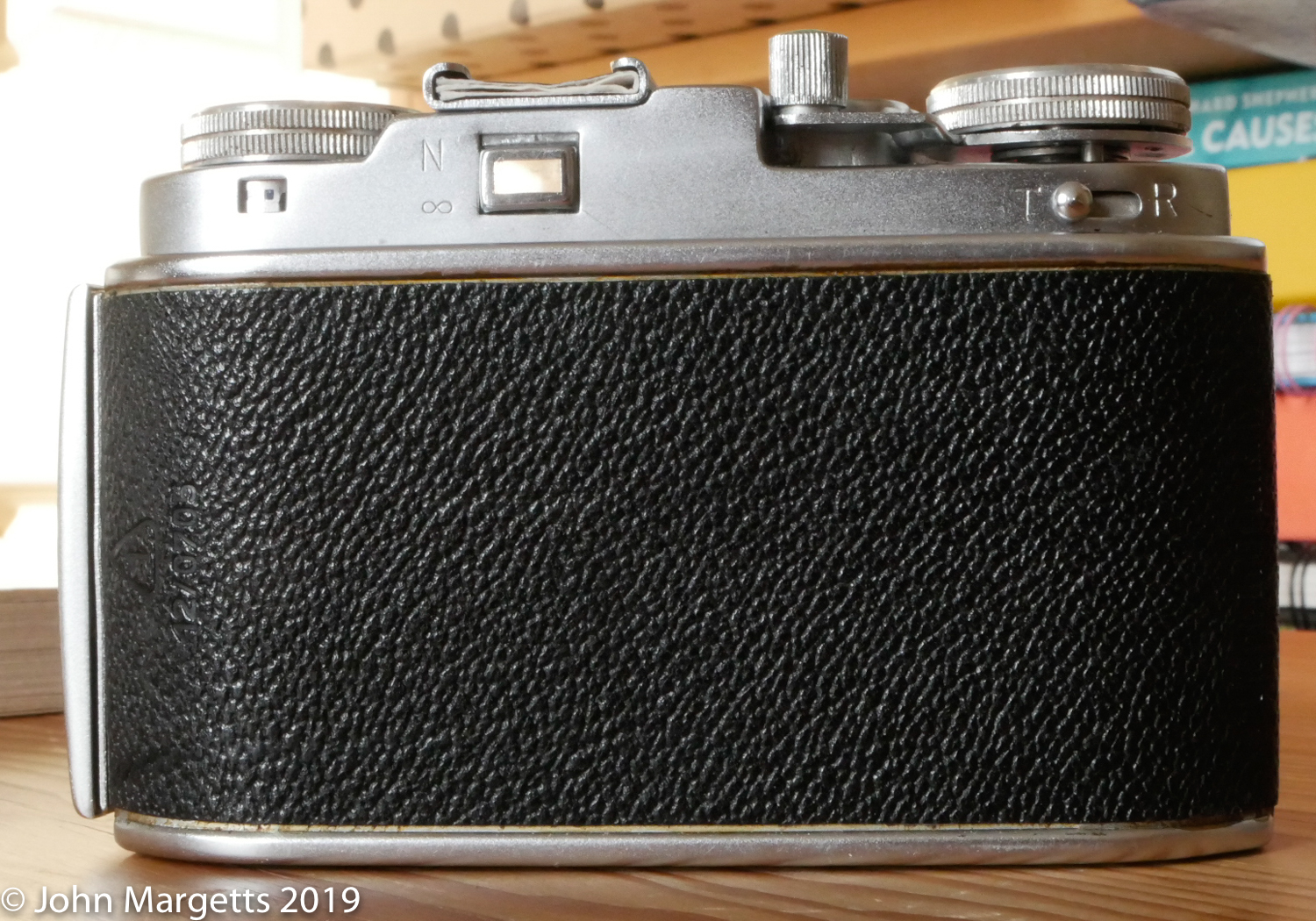 On the left hand edge of the camera is the catch for the back. It took me a while to work out how this operates. It refuses to slide or compress or press. In fact, it pivots around its centre. The back comes away completely from the camera body – no hinges here. In the middle of the back is a curved strap spring. In use, this presses on the pressure plate to keep the film flat.

The layout of the inside is also very reminiscent of the Braun Paxette. You are unable to see the film gate or lens as there is a hinged pressure plate in the way. This hinges at the top. Above the film gate is a toothed wheel. This takes the place of the sprocket shaft in most 35 mm cameras. The teeth protrude through the sprocket holes in the film and as the film is advanced, the moving film turns this toothed wheel  and ensures that the right amount of film is advanced. This wheel has eight teeth on it.

Apart from the pressure plate, all the exposed surfaces – including the take-up spool – are made from the Bakelite material. Being a German camera, there are no foam light seats to deteriorate, light tightness being achieved with deep flanges.

The back of the camera is covered with black leatherette (as is most of the body) and this leatherette is embossed at each end of the back. At one end is the 1 in a triangle quality mark Beneath this is the product number – 12/0705. At the other end of the back is the legend “Made in Germany”.

I have now run a film through the camera. I used Poundland’s Power Geek film which cost me £2.00 for ten exposures – rather expensive per shot but ten shots is all I need to test a camera. Snappy Snaps in Lincoln have processed the test film. I ended up with only four shots out of the ten as I opened the back of the camera before the film was fully rewound – four good shots and two not so good, the other four being totally fogged.

There is a lot of vignetting evident on all the shots and some flare. Overall, I am fairly happy with the results from what was a cheap camera. The thumb in the lower right of the first frame was entirely me and the lack of focus in the last two is also entirely me. The other faults are down to the camera.