The first thing you notice with this camera is the weight. The chassis is metal but the fascias etc are plastic. The camera measures 155 by 100 by 66 mm (including the grip but only 54 mm to the lens mount flange). It weighs xg.

As this is an automatic camera, there is no film advance lever. The far right of the top plate has a strap lug. Just to the left of this is a large (20 mm diameter) selector dial. This dial is horizontal and very slightly protrudes behind the back of the topple to give a grip for the user’s thumb. To the left of this selector dial is a LCD screen. This contains a whole host of information which I shall discuss shortly.

There is a grip on the right hand front of the body which houses the shutter release button. This is 12 mm diameter and is nearly flush with the top the grip. It is threaded for a standard cable release. On the back of the top plate is a slider which can be used to lock either the auto-exposure system or both the auto-exposure and auto-focus systems. This slider is easily moved by the user’s thumb while pressing the shutter release button with their fore-finger.

Almost centrally on the top plate is the pentaprism hump. This incorporates a pop-up flash so is much larger than with earlier SLR cameras. The flash is activated by pressing two small buttons on either side of the front of the pentaprism hump and lifting the flash. On top of the hump is the accessory shoe. This is an ISO hot shoe with a large central contact. There are also three subsidiary contacts which are not a part of the ISO standard (ISO 518:2006 if you are interested) and are dedicated for Nikon flash guns.

Below the focus screen in the viewfinder is a small LCD screen with some basic information. On the left are two arrows with a spot between. These are the focus indicators – the area behind the focus brackets is in focus when the spot is lit. If focus tracking is set, both arrows and spot are lit when the subject is in focus and the shutter cannot be fired if they are not lit – this will not apply if the camera is set to manual focus.

Next along is the shooting mode – PSA or M. As I do not have an AI-P lens, only A and M are available (AI-P lenses have a processor in the lens which gives the camera information about the lens settings). Next is the shutter speed which can be from 30 seconds to 1/2000 seconds. In P art A modes, the camera can set the shutter speed anywhere in this range but in S and M modes shutter speeds can only be set in 1EV steps.

Next is aperture. Because my lens has no processor in it, apertures are not reported electronically and this display shows ‘F–‘. This is not a problem because I can see the aperture scale on the lens. On the right is a digital exposure meter display for use in M mode.

To the right of this small LCD screen is a red ‘flash ready’ icon which comes on when the flash is ready (!).

What is missing in the viewfinder are any of the usual focus aids – no micro prisms, no split image. Already, Nikon were assuming that no sensible photographer would be manually focusing.

Moving to the front of the camera, the body, as usual, is dominated by the lens mount. This is the Nikon F mount as introduced in 1959 and which is still in use with Nikon digital cameras. It has three modifications over the original F mount. The first is the presence of an AI ring around the lens mount (AI=Aperture Indexed) – this allows the lens to communicate the set aperture to the camera body. Old, non-AI lenses can be used but only with manual exposure. The second modification is the presence of seven electrical contacts inside the throat of the lens mount at the top. Originally, there were no contacts, then five were added, this camera has seven and modern digital Nikons have ten contacts. The third modification is the presence of a ‘screwdriver’ autofocus link. The F mount standard is far from being standard!

As my one and only Nikon lens is an AI-S lens with no electronics the electrical contacts do nothing, and as my lens is strictly manual focus only the autofocus ‘screwdriver’ remains retracted into the lens mount while the camera is set to manual focus. There is one more feature of the mount and that is a lever on the left inside the throat that a engages with a lug on the lens. This lever movers down as the mirror moves up and, in so doing, closes the iris diaphragm in the lens.

On the lower right of the lens mount is a three-way switch. This sets the autofocus mode. The options are M (manual), S (single shot) or CF (continuous focus). For most purposes, you would use S but for moving subjects – sports or wildlife, for example – you would use CF. If, like me, you only have a manual focus lens you will use M. 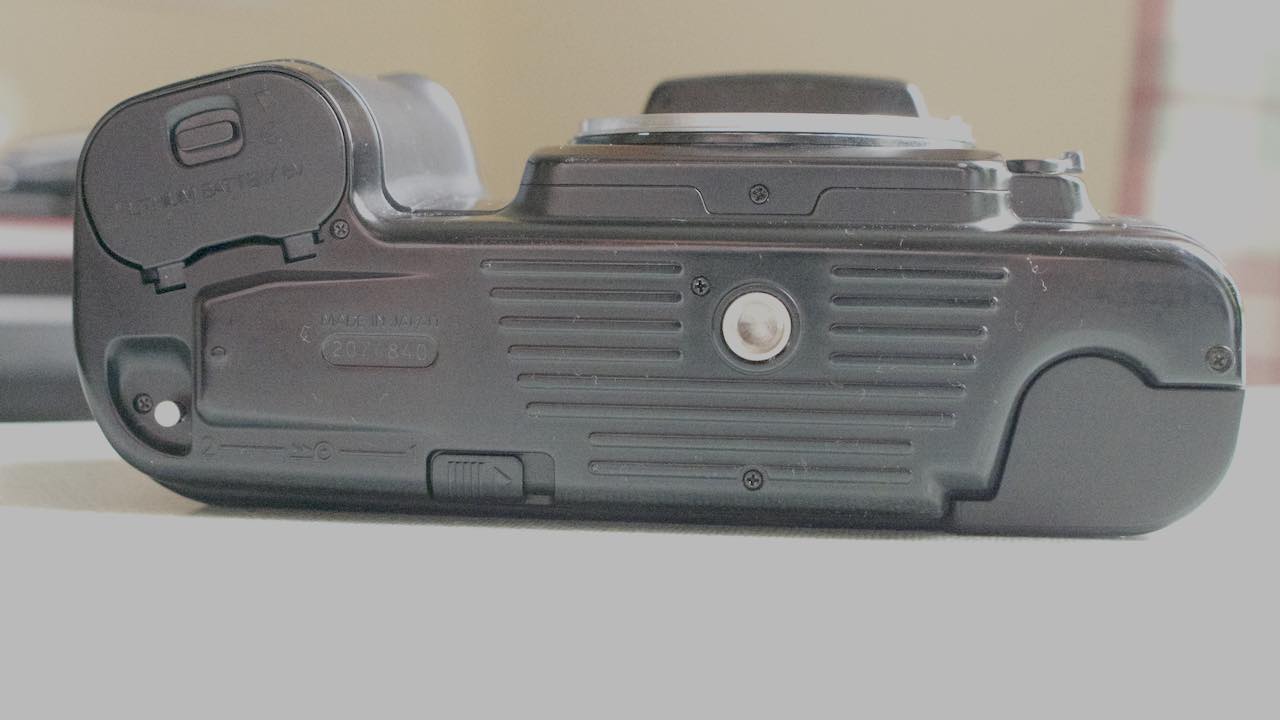 The base of the camera has little on it. In line with the lens is an ISO tripod socket (1/4 inch UNC thread). In the base of the grip is the battery compartment. This takes a CR-P2 battery which are not common but are still available – I found a shop in Lincoln that sells them. Also on the base is the rewind switch. Rewind is motorised and requires two actions to start it. First, slide the slider to the right and while holding it there, press the chrome button. Once rewind starts, you do not need to hold these two in place. My only gripe with this system is that the film is completely rewound into the film cassette which make retrieval for development harder. 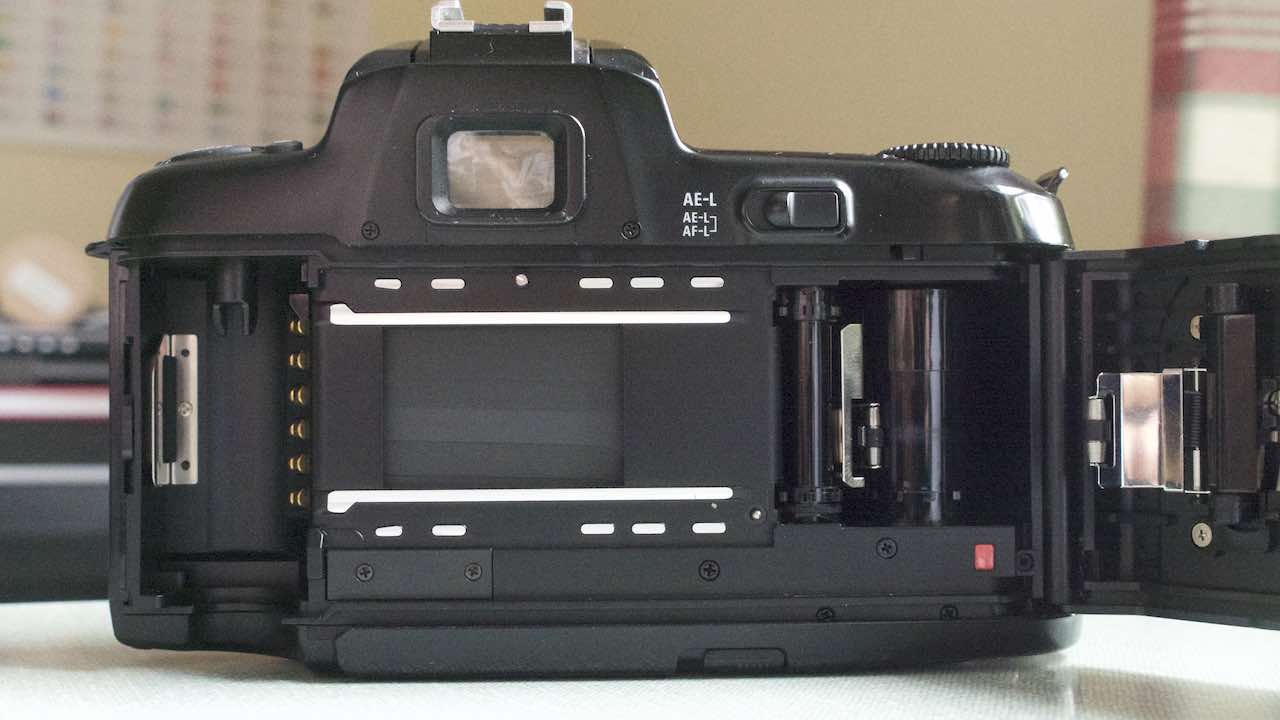 Loading the film is easy – you merely pull the film leader across the film gate to the orange square, close the back and press the shutter release button until the camera has loaded the film. There are electrical contacts in the cassette recess which read the DX code on the cassette and automatically set the film speed.

I have not been able to fully test this camera as my only Nikon lens is not compatible with all the camera’s functions. The parts I have tested work well. The camera is light-tight (not a given for old Japanese cameras) and the meter works well. The first picture where shows how the meter deals with a high dynamic range conditions – it copes rather well.

The rest of the pictures have a range of lighting conditions all of which were dealt with by the camera competently.