This is a dual-format folder from Germany. There is no name on this camera apart from the name “Plaubel A.G. Frankfurt a. M.” on the lens bezel. Plaubel are better known for their range of folding large format cameras – the Plaubel M.

This camera is a run-of-the-mill medium format camera. The camera has a rim-set Compur shutter with a serial number of 275xxxx which gives a date of 1934 for the shutter. The camera will have been made that year or the next year. The entire serial number is not visible but I know the general date by the fact that it is a rim-set shutter – introduced in 1929 – which means a seven digit number so two million, seven hundred thousand and some.

Research on the Interweb tells me that Plaubel bought in their roll film cameras from Balda and that this particular camera is really a Balda Gloria. The Balda Gloria was made in 1934 which ties in with the shutter date.

Visually, it is very like my ICA and Zeiss Ikon Icarette cameras but the details show this to have been a cheaper model – but still not cheap. The body is made from pressed steel (rather than aluminium alloy) with the bulk of the camera covered with leather (and not leatherette as you might expect on a cheaper camera) and the edges nickel plated. The camera has clearly been kept somewhere damp as there is rust coming through the nickel plating and the nickel itself has significant green verdigris.

It was usual at this time to emboss maker and model names in the leather but, apart from some straight line ornamentation, there is no embossing here. Also missing is the legend “Made in Germany” indicating that this is unlikely to be an export model (it is slightly possible that it was embossed with “Made in Germany” and that the embossing has disappeared but you can usually see such embossing even if it is too faded to read).

When closed, the camera measures 156 by 78 by 39 mm and weighs 612 g. When open for use, the baseboard extends to 130 mm. The top of the camera is plain apart from the folding viewfinder. This is just two hinged frames with no glass. The eye-piece of the finder is a plain steel plate with a 10 by 6 mm hole in it. The other frame has a 30 by 20 mm hole with a 14.5 by 20 mm central portion. If you are using the 6 by 9 cm format, you view the scene through the outer hole and if you are using the optional half-frame insert (6 by 4.5 cm) you view the scene through the inner hole. 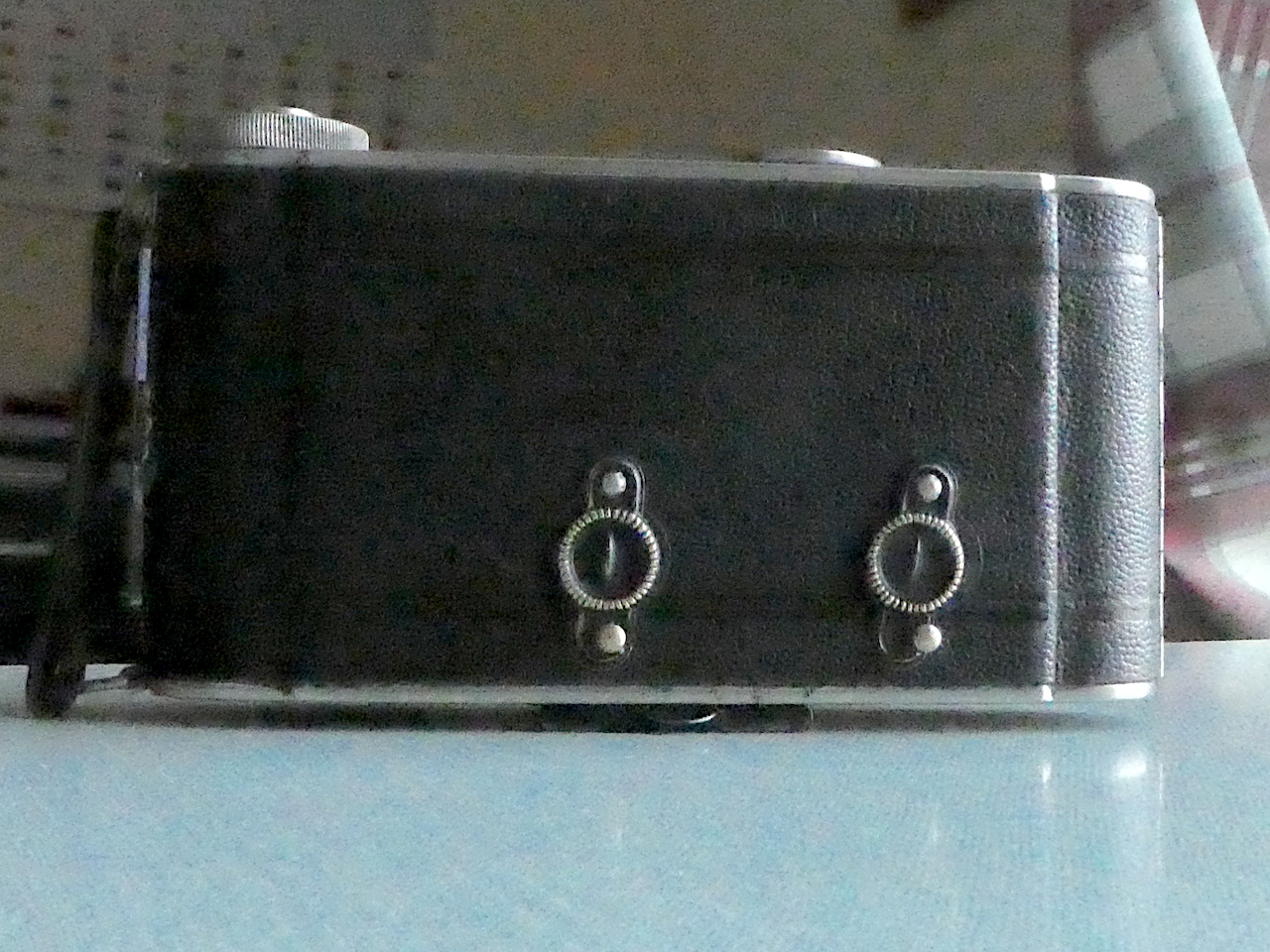 The back of the camera has two red windows. These are for viewing the frame numbers on the film’s backing paper. If you are using the camera full frame (6 by 9 cm negative) then you use the red window near thew the left edge of the camera. If you have inserted the 6 by 4.5 cm mask, then you use both windows – number 1 on the outer window, then number 1 on the inner/right hand window followed by number 2 on the outer/ left hand window followed by number 2 on the inner/right hand window and so on until number 8 has been used on both windows, giving 16 negatives on one roll of 120 film. Both of these red windows have a swivelling brass cover to prevent light coming in through the window and fogging the film.

The front of the camera opens by the small button already mentioned. The front opens itself on a spring – it does not open all the way but I suspect that it did when new. This is a self-erecting camera – the shutter/lens assembly moves forward to the shooting position on its now – which was a new idea in the early 1093s. 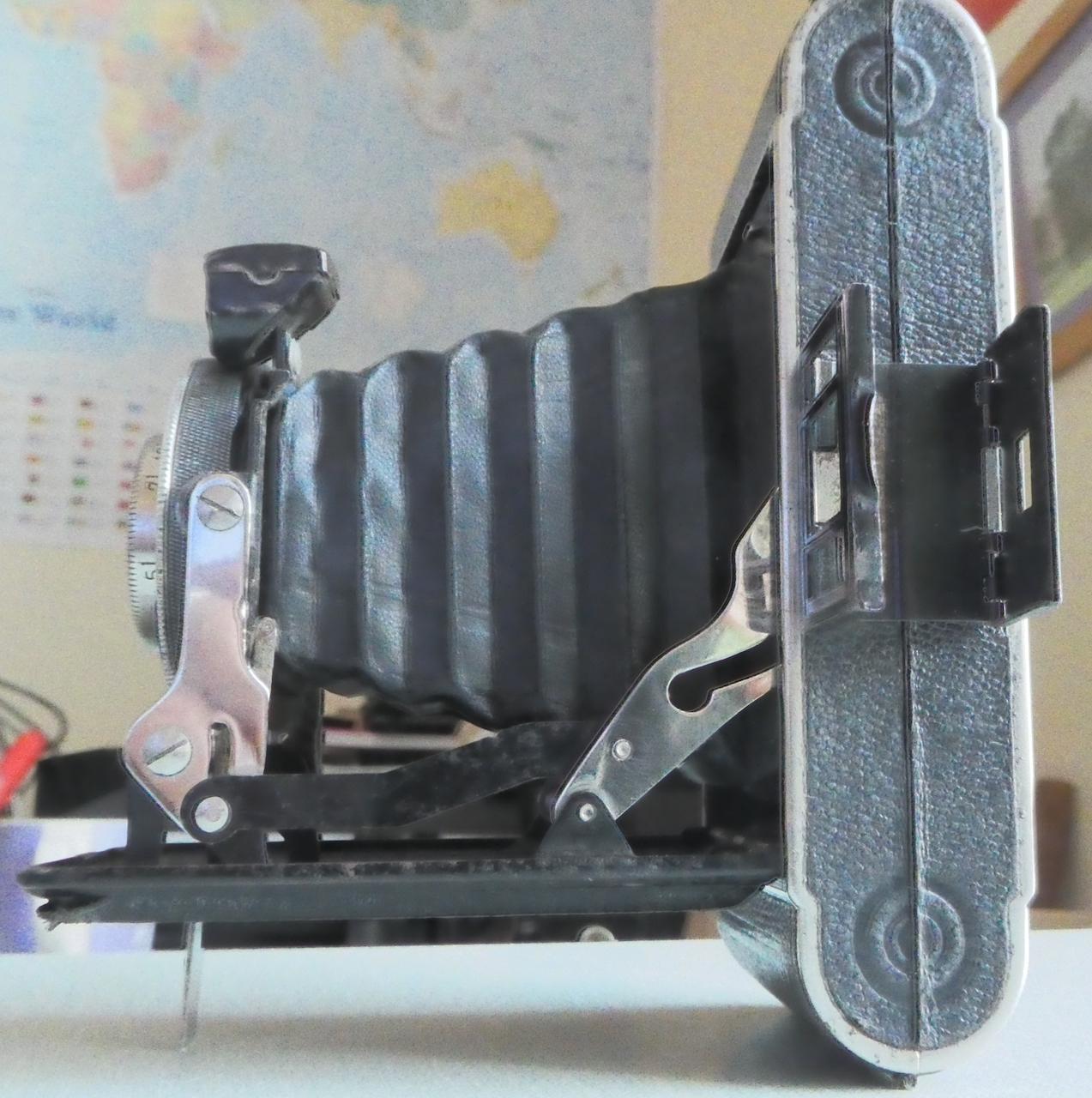 The shutter release is a lever on the lower right of the shutter housing. Above this, and just below the cocking lever, is a threaded hole to take a standard cable release. The serial number for the shutter is between the cocking and release levers. Unfortunately, this number is mostly obscured by the mounting struts but enough is visible (three digits) to date the shutter to 1934.

The apertures are set by a lever below the shutter housing. This offers apertures from ƒ/3.9 to ƒ/25. This is the older, European aperture scale which became obsolete during the first decades of the 20th century. It works in exactly the same way as modern aperture scale as moving to the next higher number halves the diameter of the aperture. The maths from which the scale is derived is also the same: the physical diameter of the aperture is divided into the focal length of the lens. So, ƒ/6 is the lens’ focal length (100 mm divided by the aperture diameter (16.7 mm) giving 100/16.7 = ƒ/6. The scale on this camera is continuous without click stops so intermediate apertures can be set.

The lens is a Plaubel Anticomar. Information on the Interweb leads me to think that this is a Tessar clone – four elements in three groups. The maximum aperture is ƒ/3.9 and the focal length is 10 cm (which, obviously, is 100 mm). The change from declaring focal lengths in cm to mm occurred slowly through the 1940s. Focusing is by way of a helical rather than the older system of sliding the lens. This is front cell focusing – only the front piece of glass moves, rather than the entire lens. The focus range of the lens is from 1.5 m to infinity. This lens has a serial number of 89043.

On the top of the shutter housing is a viewfinder which is a brilliant finder. This finder swivels to allow the camera to be used in either portrait or landscape orientation. There is also the folding finder mentioned earlier which is much easier to use and also includes framing for the half-frame option.

Then shutter/lens housing is connected to the camera body  by leatherette bellows. These bellows are always a weak point with folding cameras. All my Zeiss Ikon and Voigtländer folders from the 1920s and 1930s have bellows in good condition yet Agfa folding cameras are notorious for having bellows with small light leaks. The bellows on this camera have been repaired inside with black fabric tape so I must assume that each piece of tape represents a light leak.

On either side of the bellows are the metal struts that hold the camera lens door and the shutter/lens housing in place. When open, the shutter/lens housing is held rigidly in place with no p-lay – this is important as the lens needs to be exactly parallel to the film. There are three struts on either side, the front and rear struts are chrome plated and the middle strut is painted black.

To close the open camera, you need to press the tops of the struts towards the back of the camera and then lift the camera.

Inside the back of the camera are two spool carriers, one at either end. The reason for having spool carriers light baffle against any stray light coming in the hinge or the catch. German cameras never used foam light seals.

The spool carrier near the hinge takes the new, unexposed film. The spool carrier swings out on a hinge and, as it does so, one end springs out a few mm to ease the insertion or removal of the roll of film. At this end, the film spool is held o0n two short round pegs.

Ensign All Distance model No. 1

Incidentally, spools from various makers and from various times differ in detail. The empty spool that was in this camera when I bought it only has a slot at one end (it is a metal Kodak spool) and needs to be fitted the right way around. All the plastic spools I can recollect have the slot at both ends.

The film gate sits between the two spool carriers. This has four grooves, top and bottom, to allow for air movement. Oner of the weaknesses of folding cameras is that when you extend the bellows you generate a partial vacuum which can pull the film towards the lens resulting in a curved piece of film in front of the lens. This would cause the image in the centre of the frame to be soft. The grooves allow air to move into the bellows without the film moving.

With the front of the camera closed and the back open, you can inspect the rear of the lens. The rear lens element is clean, clear and fungus free. Unfortunately, I can also see the iris diaphragm. One blade of this is out of place and is obscuring the lower part of the aperture. It still moves as the aperture is adjusted but remains in the wrong place.