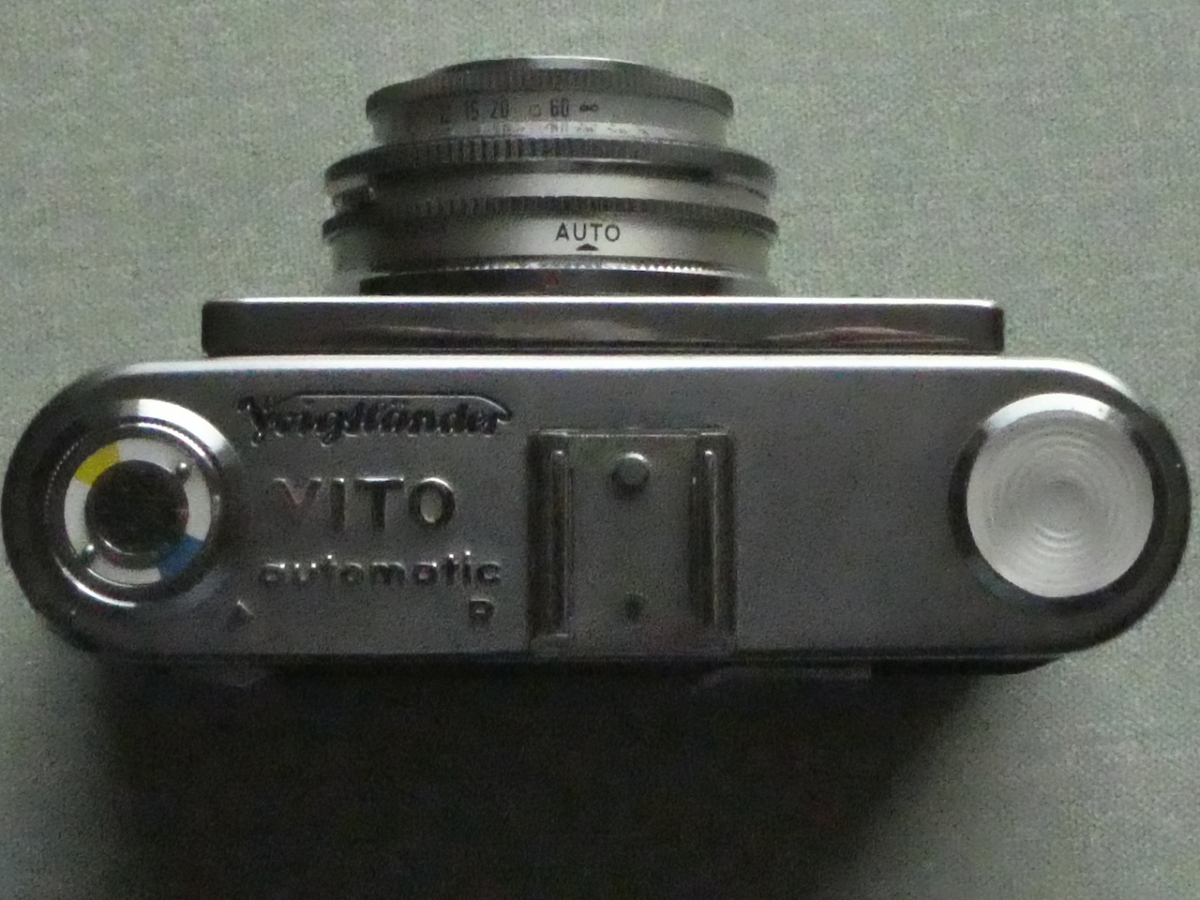 The Vito range of cameras by Voigtlander morphed into a sizeable range – Vito, Vito II and III were folders to be replaced by the Vito B, BL, BR, Vitomatic I and II. Next came the Vito C range Vito C, CD, CR, CL, CLR, Vito Automatic I and II and this Vito Automatic R. As usual, I have no manual for this camera so I am having to work out how this works.

The available apertures for flash are f/2.8 to f/22 – a fairly normal and very usable range. The iris diaphragm has five blades giving a pentagonal aperture. At one end of the aperture scale is B – Bulb for indefinite exposures (the only shutter speed you can set by hand).

The shutter is a development of the Prontor shutter from the 1930s. This version is the Prontor-Lux. The -Lux epithet tells us that the shutter is designed to work with a light meter. Being an automatic camera, there is no meter readout – not in the viewfinder nor elsewhere.

On my camera, the light meter did not appear to work at first but does respond to, at least, extremes of light or dark. I have pointed the camera towards very different light sources and there is no notable change in shutter speed and the aperture remains at close to its maximum size (but not quite – I would guess it is at f/4). Also, in the viewfinder, there is a red spot to indicate low light. Of course, this is not necessarily the light meter – it could be the failure of any part of the automatic exposure system but the light meter probably the weakest link in the system and are notorious for failing in old cameras. As this is a selenium meter, there can be no battery issues.

The camera also has a built-in coupled rangefinder. This will be the reason for the ‘R’ designation in the camera’s name. This rangefinder has a very clear central rangefinder spot. This rangefinder is no longer coupled to the lens focus ring – again, not entirely unexpected on a 55+ year old camera.

But – someone has taken the top off the camera (and replaced one of the original slot-headed stainless steel screws with a JIS slotted black screw). The viewfinder is not seated correctly – it is crooked and slightly loose. I suspect that someone has opened up the camera to attempt a repair and made things worse. I shall have a look myself to see if I can make things better – there is probably no further harm I can do.

So, a brief description. this camera is essentially a Vito C camera. It measures 130 by 90 by 72 mm and weighs 734 g. The top plate is sparse – and made from pressed steel rather than the more usual brass. On the right is a flat translucent dome . This illuminates the red and green flags in the viewfinder. Centrally, there is an accessory shoe – no electrical contacts so a cold shoe. On the left is the rewind knob. This is flush with the top plate and to use it you must move a lever at the back of the topple slightly to the left. The rewind knob will then pop up for use. The knob will also pull up to a second position to allow for the insertion and removal of film cassettes. The top of the rewind knob has a film reminder set into it. The options are blue, yellow or white. Between the accessory shoe and the rewind knob is the camera model: “Voigtlander Vito automatic R”

The back of the top plate has three items. On the right is the film advance lever. This moves through about 225º to advance the film one frame. This is rather a long throw but quite easy to do. For people with restricted mobility in their thumbs, the lever is on a ratchet and the film can be advanced with a number of small movements. Unlike the Vito folders and Vito B range, the film advance lever also cocks the shutter directly – there is no need for film to be in the camera.

The front of the top plate has a chromed fascia that holds three items. First is the viewfinder window. This measures 26 by 15 mm. Centrally in the fascia is a black square, 15 by 15 mm, which contains a circular window for the rangefinder. The separation between the rangefinder and viewfinder windows is 28 mm – not so large and not comparable with the FED 2 or Kiev 4 – but accurate enough for the use this camera would have been put to (the larger the separation of the two windows the more accurate the rangefinder).

The third item is the light meter window. This is the usual knobbly glass and measures 28 by 20 mm.

Below the top plate. on the front, is the lens/shutter assembly. The shutter is a Prontor-Lux and measures 56 mm diameter externally. The prime setting for this shutter is ‘AUTO’ leaving nothing for the user to decide. It is possible to set the aperture manually – this is intended for use with flash only. The aperture range is f/2.8 to f/22 with a five-sided iris diaphragm.

The lens is a Voigtlander Lanthar lens – the name suggesting that at least one element of the lens uses lanthanum glass (in which case it would be mildly radioactive) with a focal length of 50 mm. This is front cell focusing and has a focus range from 3.5 feet to infinity. Being an export version of camera, the distance scale is only in feet. In good Voigtlander tradition, there are three Happy Snapper settings. I think that these are there as they are standard for the lens rather than being intended for use with this camera. In order to use Happy Snapper settings, it is necessary to set the aperture to the appropriate size which cannot be done on this camera.

At the bottom of the shutter housing is a small conical foot. This allows the camera to be placed on a level surface for longer exposures. With other cameras in the Vito C range there was a self timer to allow for selfies but not with this shutter.

The base of the camera has a tripod boss in line with the centre of the lens. This is the standard 1/4 inch Whitworth thread. My camera appears to have an insert suggesting that the camera was made with the older 3/8 inch boss.

Also on the base is a frame counter. In line with Voigtlander’s usual habits, this frame counter counts down to show how many shots are left. This means that when loading a new film it is necessary to set the film length on the frame counter. There is a circle at frame 22 – this is because 35 mm film used to come with a film length of 20 frames rather than the modern 24 (as well as 36 frames). 22 frames allows for the two initial frames that must be wasted when loading a new film. The frame counter is run by the sprocket shaft rather than the film advance system so does not work if there is no film in the camera.

Inside is pretty normal for a 35 mm camera – the cassette goes on the left, film gate is nearly central followed by the sprocket shaft and then the take-up spool. There take-up spool is nice and large – about 20 mm diameter – which means that the film will not be curled too much thus being easier to load onto a developing spiral.