FED 35A or ФЭД 35A
a 35 mm rangefinder camera from the Soviet Union. 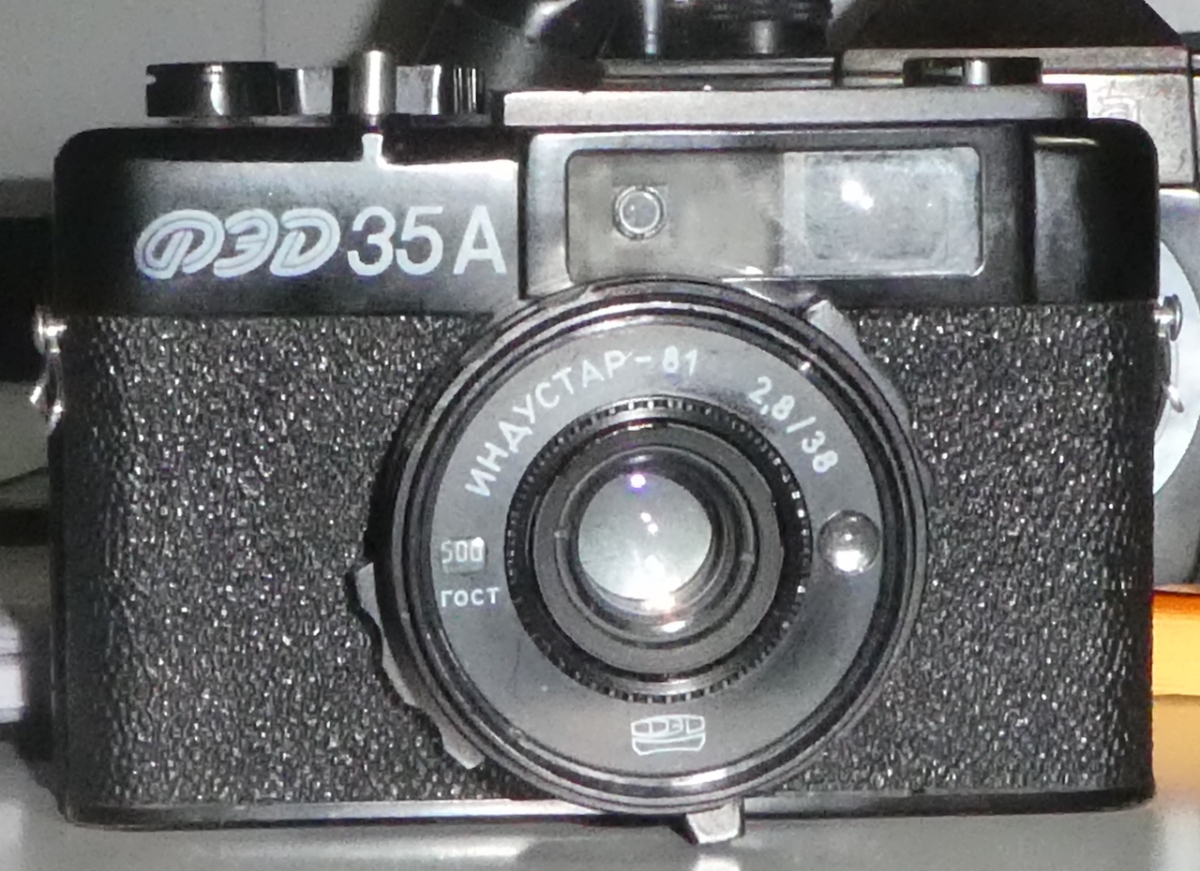 This FED 35A camera is a compact 35mm film rangefinder camera from the Soviet Union. With the FED name, I would assume that it was made in Kharkiv, Ukraine. This camera was made between 1987 to 1990 according to the Interweb – this means that the serial  number does not start with the year of manufacture (number is 849208). This is my fourth Fed camera – my others being the Fed 2, Fed 4 and Fed 5.

The camera seems to be intended for home consumption. All the writing on the camera is in Cyrillic. There is a logo on the rear of the camera – a pentagon with a four pointed star and the letter CCCP (USSR in Cyrillic). This logo indicates that the camera has been manufactured to international standards and should be as good as a camera made elsewhere in the world.

It could be that the camera was officially exported but the expected sales levels might not have supported an export version. The camera is entirely black with white writing. The body measures 112 by 78 by 32 mm. The lens protrudes a further 28 mm. The camera weighs 446g.

The body is metal – die-cast aluminium with a pressed aluminium top plate and brass base plate. Most of the body is covered with black leatherette and the rest is painted satin-black.

In the right hand rear corner of the top plate is a small window (6mm diameter) giving on to the frame counter. This counter is reset by opening the camera back. It is necessary to advance the film three frames to get to frame 1 – this is to remove the length of film fogged while loading the film. Apart from frame 1, the odd-numbered frames are represented by dots, only the even-numbered frames having digits. Number 2 is missing entirely. Frame numbers go up to frame 36. If you wind beyond this, the frame number does not move anymore.

Next to the film advance lever, right at the front of the top plate, is the shutter release button. This appears to be made from stainless steel. It is a simple cylinder which is threaded for a standard cable release. The button falls easily to my fore finger while holding the camera for use, which is more than can be said for the FED 2,4 or 5.

Nearly centrally on the top plate, on a slightly raised portion, is the accessory shoe. This has one central electrical contact and so is a hot shoe – it can be used with most electronic flash guns made since the late 1960s. On the left of the top plate is the rewind crank. This is very small (14mm diameter) and folds out to 23mm. It makes the Japanese rewind cranks look very generous.

On the rear of the top plate is the viewfinder eyepiece. This measures 8 by 6 mm – it is not the smallest eyepiece I have come across but it is close. This eyepiece double as the rangefinder eyepiece.

The yellow dot is nice and bright and the two images easy to see. The down side here is that the rangefinder window is very close to the viewfinder window. This means that the two images do not move much as you turn the focus ring. The focus ring also does not rotate very far. These two together make critical focus other difficult. incidentally, the colour of the yellow dot is achieved by using gold on the internal mirrors rather than silver.

The viewfinder image has bright lines – large corners for landscapes and small corners to allow for parallax with close-ups.

The front of the camera has the shutter/lens assembly in the centre. The shutter is an anonymous Soviet leaf shutter offering speeds from 1/4 seconds to 1/60 seconds in manual mode. I am told by the Interweb that when in the automatic mode, the shutter will go to 1/300 seconds but as I do not have a manual for this camera I cannot confirm that. This manual range is very poor and I would struggle to get good exposures with these shutter speeds and the limited aperture range. The other Fed cameras the I have – FEDs 2,4 and 5 – all have cloth focal plane shutters. I assume that the designers went for a leaf shutter here to maintain compactness.

The lens is an Индустар (Industar in the Latin alphabet)  81  lens. I am assured by the Interweb that this is a four element lens with three groups – a Tessar copy. My experience of Soviet lenses is that they are excellent performers – it remains to be seen if this lens lives up to the Soviet’s reputation. The lens has a focal length of 38mm – this is slightly wide angle for 35mm photography (43mm is ‘normal’) but quite usual for compact cameras as the shorter the focal length of the lens, the shorter the lens barrel – and more compact the camera. The lens has apertures from f/2.8 to f/16. This is a usable range even if a bit short (but see my comments above about this aperture range and the rather slow shutter speeds in manual mode). The diaphragm is a disappointment – it consists of only two leaves each of which has a right-angle notch cut in it. As these two leaves swivel from the bottom, the hole varies from a flattened diamond at f/16 to an inverted and elongated kite at f/2.8 – not good for lovers of bokeh. When the shutter speed is set to either B or A (automatic) the aperture opens to f/2.8.

The lens bezel contains the light meter window. This is rather small and sits to the right of the lens. The meter is a CdS device and so requires batteries (see below). On the opposite side of the lens is a window showing the selected film speed. This is in gost – but is labelled гост in Cyrillic – which was the Soviet Union’s own film speed standard. This gost film speed is very close to ASA or ISO speeds but apparently not quite the same. This offers film speeds from 16 gost to 750 gost. When I try this camera, I shall just assume they are ISO speeds.

Opening the camera uses the now standard method of pulling up the rewind crank.As far as I can see, the back is rendered light tight by using felt light seals rather than the more common foam seals. This bodes well for light tightness in an elderly camera – my test film will show for sure.

The take-up spools a full length steel spring to hold the film leader. This take-up spool turns clockwise so the film is wound with the emulsion side outwards.

The base of the camera has a central tripod socket. This is the usual 1/4 inch UNC thread. Next to this is the battery chamber. I have no idea as to what size battery is intended but I am using two silver batteries which will give me a 3v supply. This seems to work so far as the automatic system is concerned but the test film will confirm whether this is correct regarding exposure or not.

On the there side of the tripod socket is the button to enable rewinding of the film. Push this in far enough and it is not necessary to hold it in while resining. The base is also where the serial number is stamped.

I have run a test film through this camera and had the film developed (by Snappy Snaps in Lincoln, as usual). I am quite pleased with this camera. The automatic exposure does not work (well, it does on rare occasions, when it feels like it, but not usually). Using my trusty Leningrad light meter all the exposures are usable – negative density varies from good to slight overexposure with most shots having good negative density. It was easy and pleasant to use.

One down side with the test film – which has nothing to do with the camera – is that  as the film moves through the camera, both while taking pictures and when rewinding, the moving film generates a small amount of static electricity. This static attracts any dust inside the camera – and this camera seems to have had plenty of dust in it which has affected the images. The photographs below show this dust – I have removed some of the dust but not all.

There are no light leaks, the consistent exposures shows that the shutter is working as it should with timing being at least approximately right and consistent (and that my Leningrad light meter is still OK).