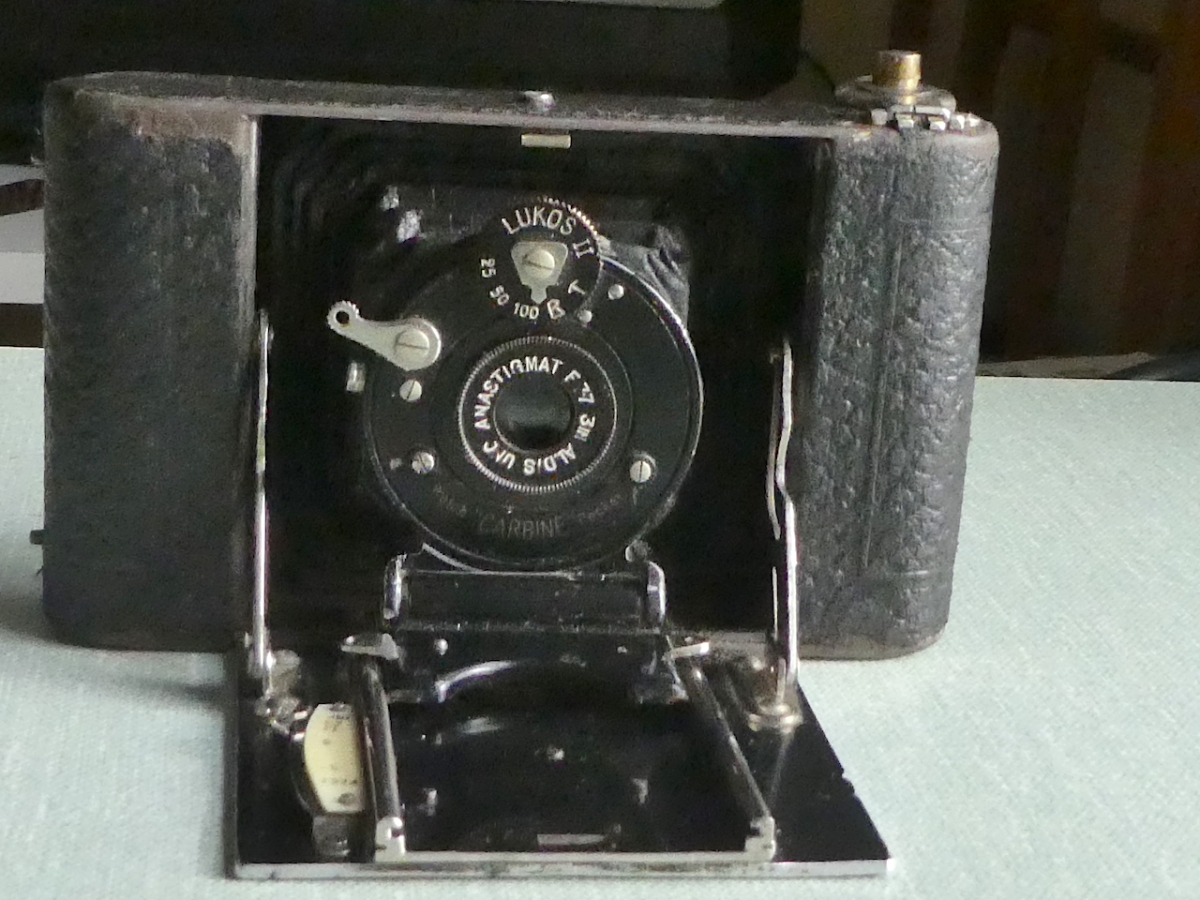 This is my oldest camera to date. Dating any old camera is problematical. There is a body serial number – C35133 – in the standard Ica (and then Zeiss Ikon) sequence. The trouble is that all Ica and Zeiss Ikon records were lost in the bombing of Dresden in WWII. A lot of work has been done by enthusiasts to correlate serial numbers and dates – this is done with lens serial numbers (which have survived, not having been held in Dresden), shutter serial numbers and ancillary information such as known production dates and sales invoices.

So, this camera. The model – an Ica Icarette model 1(type 495) – was made from 1912 to 1926 and then continued by Zeiss Ikon as their Icarette 493. Various revisions help to narrow the date somewhat (my camera clearly uses 117 film as 120 spools do not quite fit). More useful is the fact that Ica made this camera for Butcher’s in the UK. As a result of hostilities in WWI, Butchers were no longer allowed to trade with German companies. This gives a date for this camera of between 1912 (date of introduction) and July 1914 (the outbreak of World War I). Information from other camera collectors suggests that the “C” serial numbers date from 1913 – just a suggestion, mind, as “C” could have run from late 1912 to early 1914. Any road, I am going for a date of 1913 until such time as someone shows me different.

I have another Ica Icarette I which is mostly the same as this Butcher’s Carbine. The differences are minimal except for the viewfinder – this Butcher’s Carbine has no viewfinder and there are no indications that there ever was one. These cameras were supplied with one of two options (or both). The first option was a small Brilliant finder attached to the shutter housing. The attachment was a part of the metal moulding of the shutter housing and was not removable – there are no traces of anything being attached at this point.

The second option was an Iconometer which was basically a wire frame fixed to the top of the shutter housing with two screws and an eyepiece attached to the body of the camera. Again, there is no evidence of either the wire frame or the eyepiece ever having been attached. On the other hand, how would you use the camera with no viewfinder?

The name intrigues me. The full name of this camera is ‘Watch Pocket “Carbine”‘, with “Carbine” in quotation marks. The Watch Pocket part presumably indicates that the camera would fit into a small pocket. The camera is certainly very small – yet Butcher’s also sold 6x 9 cm cameras as Watch Pocket which were not very small. The “Carbine” part? The quotation marks tell us that it is not really a carbine. So, what is a carbine? It is a rifle with a rather short barrel – a smaller gun (or so Wikipedia tells me!). I think that Butcher’s used the name “Carbine” to indicate that their cameras were smaller than their competitors’ cameras.

The body is made from steel as far as I can see, covered with black leather. After 105 years, the leather has deteriorated somewhat and the steels exposed and a bit rusty. The lens door is aluminium painted gloss black. The insides of the camera is painted matt black. The camera measures 130 by 72 by 25 mm when closed and by 90 mm when open for use. It weighs 325 g.

To focus the lens closer than infinity, there is a radial lever on the front right of the baseboard

As was usual 100 years ago, the camera folds up when not in use. To open the camera, you press a small stud on the top. There are no springs involved so the user has to pull the baseboard down by hand. The baseboard is held in place by two chrome struts. The lens now needs to be pulled out to its working position. Usually, this is done by pulling two chrome studs under the lens.

These are missing on my camera (there is a price too pay for being 105 years old!) but the lugs the studs fit in are still there. One of the lugs is spring loaded and presses in towards the centre to free the lens. A further problem with my camera is a missing stud on the baseboard behind the lens. This locates the lens when the camera is folded up. The problem here is that the shutter/lens assembly comes away from the guide rails when the camera is closed. So, when opening the camera, the shutter needs to be relocated onto the guide rails.

When pulling the lens out, it locates on a further stud, putting the lens in the infinity focus position. To focus the lens closer than infinity, there is a radial lever on the front right of the baseboard. When moved fully forward, the lens is focused at three feet. Precise focus is not possible but this was not important as the user would only have had 6 by 6 cm contact prints made which would not show up defects in focus. 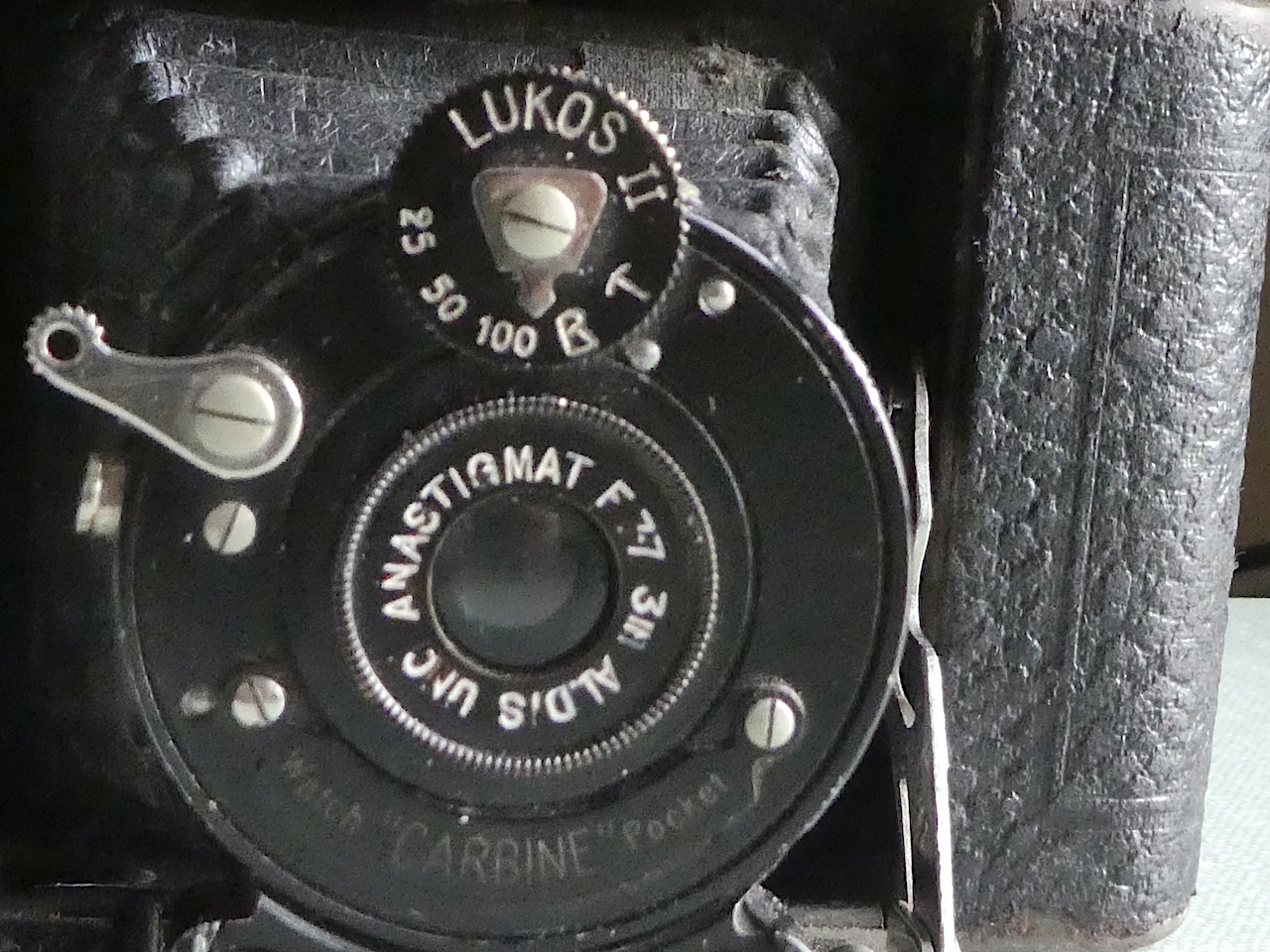 The shutter is a Lukos II shutter which is only (as far as I know) found on Butcher’s cameras made by Ica. It would seem to be identical to the shutter on my Ica Icarette I but with a much cheaper dial. I suspect that this is either an Ica Automat A or an Ica Automat X. Both are dial-set shutters (as all leaf shutters were until the end of the 1920s). Speeds available are 1/25, 1/59, 1/100, B and T. For my modern readers, B keeps the shutter open while the release lever is held down and T will leave the shutter open until the release lever is pressed a second time. The dial is cruder on this carbine (just a serrated disc) compared to the Icarette’s dial but all other details are the same – shutter release lever details, cable release socket, size and position of fixing screws are exactly the same – see the photos. The shutter is a simple Everset variety – there is no need to cock the shutter first.

The lens is an Aldis Uno which is a triplet lens with the two front elements cemented together. In 1913, these were not coated so care would be needed to avoid light sources in the image. Aldis were a British company who are perhaps better know for their military Aldis Lamp which was used to signal at night in Morse Code. Aldis ended up being bought up by the Rank Organisation and became Rank Aldis and were known for their projector lenses.

This Uno lens has a decent reputation and in some versions, the front doublet could be removed and replaced by a long-focus alternative. I am not sure if that was the case here. The maximum aperture of this lens is f/7.7 which was fairly small for the day (the Ica Novar equivalent had f/6.8). The aperture scale is the modern one of f/11, f/16, f/22 and f/32 (the Ica version uses the older series of f/6.6, f/9, f/12.5, f/18, f/25, f/36). The f/7.7 does not form a part of any aperture series and is just the maximum aperture that the design produced. The iris diaphragm actually opens well beyond f/7.7 but at that point the aperture is defined by the fitting holding the rear lens element rather than by the iris diaphragm.

The iris diaphragm has nine blades each of which is curved giving an aperture that is very nearly circular – good news for aficionados of bokeh.

The focal length of the lens is three inches – British Empire was still very anti-metric in 1913 and this is a British lens. Three inches is 75 mm which is normal for 6 by 6 cm negatives (and the same focal length as on the Ica Icarette I version of this camera even though that one is expressed in cm).

The back opens by a small slide catch on the right hand edge off the camera. The whole back comes away in one piece. In the centre of the back is the red window for reading frame numbers off the film backing paper. This has a swivelling cover made from brass to prevent stray light from fogging the film.

Inside, there is a chamber on the right to hold the new film. This is not securely held in place. There is a curved spring steel spring to stop the spool from rattling about. The take-up spool goes on the left – again, the spool is not held securely in place – there is the same steel spring as on the other side. In order to move the film, there is a hinged key on the left hand top of the camera which locates in the slot on the top of the take-up spool. On my camera, the actual key part you hold onto is missing meaning that if I was to try to use this camera, I would have no way to advance the film between shots.