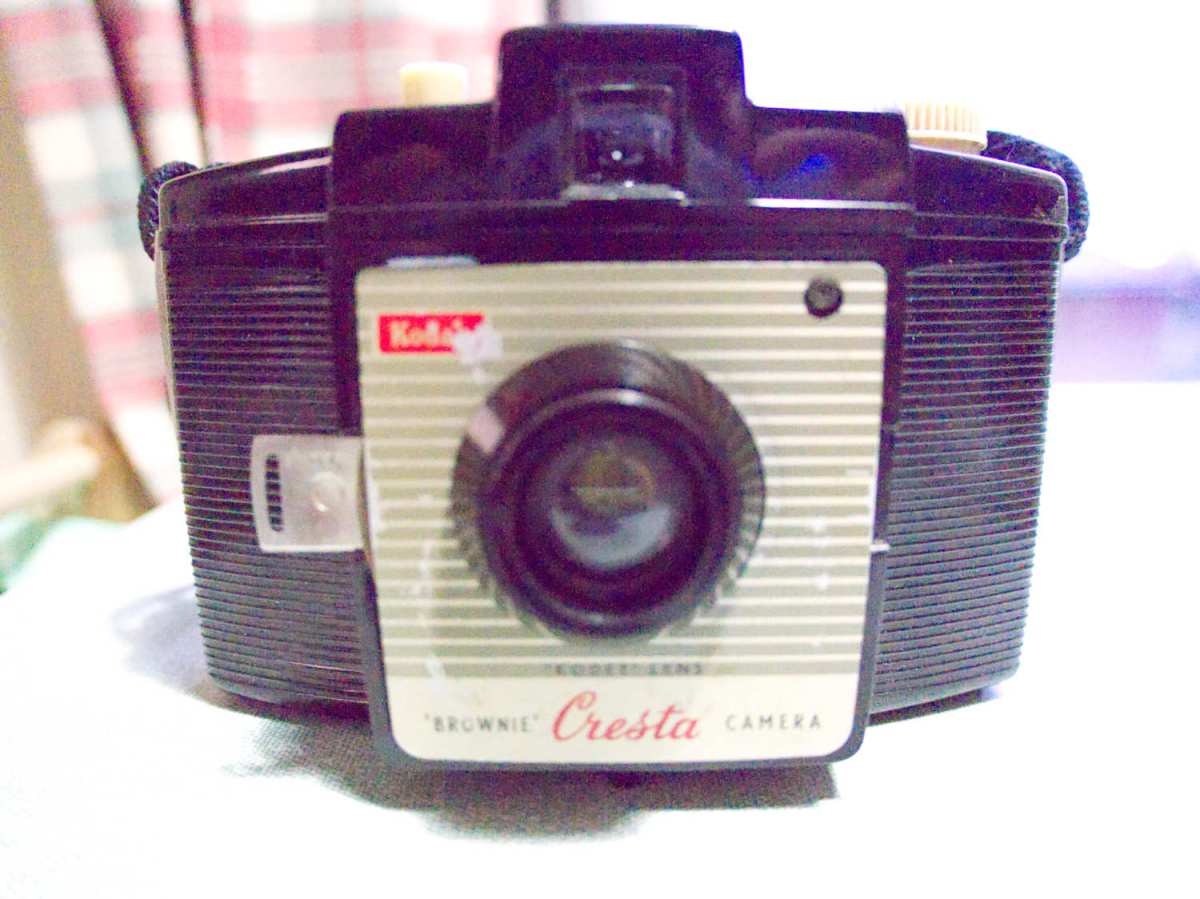 Kodak made a prolific range of cameras over many years. In fact, their ranges of cameras had sub-ranges. This camera is a Brownie which is a range of amateur cameras first made in 1900. Brownie cameras were aimed at snap shot photographers and were extremely simple to use. My first cameras was a Brownie Vecta and produced quite good pictures. This Brownie – the Brownie Cresta – was made from 1955 to 1958 (according to Camerapedia).

The basic shape of this camera is curved. Having the film curved corrects a lot of lens distortion and improves image quality at little cost.

There is little in the way of controls on this camera although there are some. On the top is the film advance knob. This is an ivory coloured plastic knob. This will continue to wind the film from one end to the other – the user has to look in the red window at the frame numbers to control the film movement.

Also on the top is the shutter release button. This also is ivory coloured plastic. There is no double exposure control here – you can take as many exposures as you like on one frame.

At the front of the Cora, at the top, is the viewfinder window. This gives a rather small, square image of the view. Below this is the lens which is labelled as a ‘Kodak’ lens. This is a single element meniscus lens which has a depth of field of around seven feet to infinity. Behind the lens is a slide with three elements. The central element is merely a hole which has no effect on anything – this is the normal way to use this camera. Pulling this slide to the right (as when looking at the lens) moves an additional lens element into place behind the main lens. This gives a focal range from four feet to seven feet and is intended for portraits – it is labelled ‘close-up’.

Pulling the slide to the left (again, as when looking at the lens) moves a pale yellow filter into place behind the lens. This would have been ideal for beach photography (which surely would have been one of the main uses of this camera) as the use of this filter would have helped the surf to standout from the sea, clouds to stand out from the sky. It also would have slightly reduced the amount of light reaching the lens and so reducing the risk of over-exposure with the bright light frequently encountered on summer beaches.

Above the lens, in the corner of the fascia, is a PC connector for flash. Given the age of the camera and its intended market, this will be synchronised for flash bulbs. The synch mechanism is simple and crude. Electrical contact to fire the flash is made as soon as the shutter starts to move. The shutter needs to move 3 to 4 mm before the film is actually exposed. This delay gives the flash bulb a chance to reach maximum intensity before the shutter opens and then the bulb would continue to burn while the shutter was open.

This simply would not work with electronic flash where the flash duration is so brief it would be likely to be over before the shutter opened.

On the base of the camera are two items. First, a standard 1/4 inch Whitworth tripod socket. Centrally, there is the catch to open the camera. Turning this atto-clockwise allows the top of the camera to be pulled up, removing the spool holders and film gate with it. The film gate is 7/8 inches square (my apologies to my metric riders but this camera was made using English Imperial units). The film gate is about 1 1/2  inches away from the film so the edges of the image will not be a sharp line. I doubt anyone was bothered about this.

The film used here is 120 film (still readily available). The spools are held in place with  simple strip of spring steel.

Immediately behind the film is the red window. this is used by then user too see the frame numbers printed on the paper backing of the film. This red window is in the centre of the back – 120 film has three series of numbers printed on it for the three image formats used by 120 film cameras. Right at the top of the back is the viewfinder eyepiece which is 7/16 inches square.