A folding medium format camera from Voigtlander from 1939 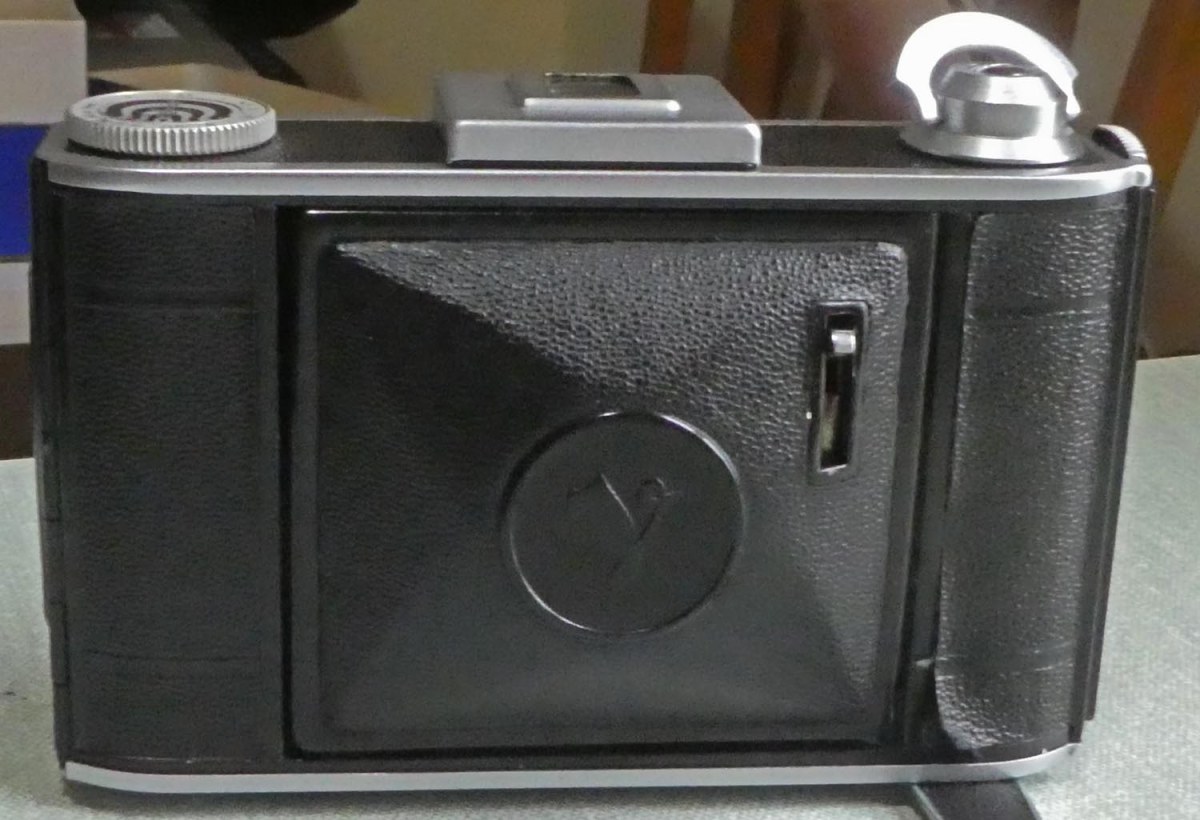 This is a pre-war (pre-1939 – 45 war, that is) Bessa camera from Voigtlander. I can almost date the camera from the lens serial number – 2,518,575. When Voigtlander restarted production in 1945 they were using lens serial numbers starting with 2,7xx,xxx so this camera is well before 1945. It is also stamped with the word ‘Germany’ on the leatherette. That effectively puts a latest date of September 1939 on the camera as this is clearly an export camera. In 1937, Voigtlander serial numbers reached 2,XXX,XXX and this is 500,000 beyond that so this is most probably from the last production in 1939.

The camera is in nearly new condition. There is a very small amount of black paint missing and some of the corners of the leatherette are lifting. This is almost certainly glued in place with shellac which has hardened over the last 78 years. I am not going to bother regluing it. The other outstanding thing about this camera is that the hinged yellow filter is in place and in good condition. Every other Bessa I have ever seen has this filter missing.

The camera measures 133 by 80 bob 35 mm when closed and by 97 mm when open for use. It weighs 480 g. Being a camera of its age, there are few controls. On the top three items 1) depth of field calculator 2) falling viewfinder 3) film advance key. 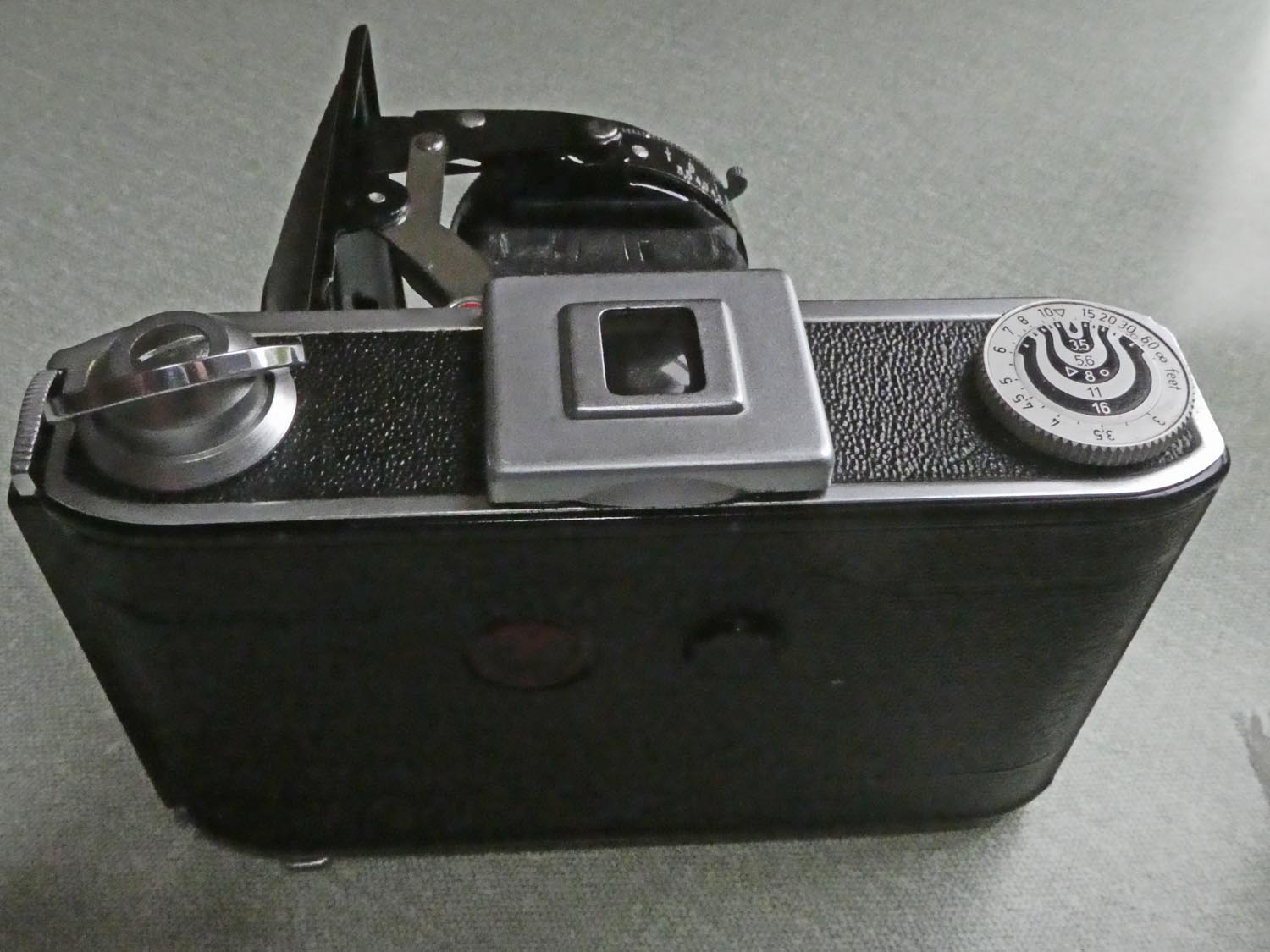 1) the depth of field calculator is simple to use. You rotate the outer ring until the distance to your subject is at the front by the black arrow. You then look down the centre to find your chosen aperture and follow the curved line both left and right to the outer ring. The numbers at this point give the nearest and farthest distances that will be in acceptable focus. Example: you’re focused on 15 feet and are using an aperture of f/11. When 15 is by the black arrow, the silver line for f/11 shows 9 feet (Actually an unnumbered mark between eight and 10) on the left and just short of 60 feet on the right. Acceptable focus will be from 9 feet to 40-ish feet. Also included are Voigtlander’s standard indications for portrait (a triangle) and the group (a circle).

If you want to know the hyperfocal distance for landscape work, set infinity against the chosen aperture on the right and read the required focus distance from the pointer at the front.

The viewfinder folds flat in order to allow the camera to be carried in a pocket. To open it, lift the back of the viewfinder and both parts will snap into place. Both parts contain glass lens and it is necessary to place the rear of then viewfinder very close to your eye. This is nowhere near as accurate as composing with an SLR camera, but is fine for all but the most critical use.

On the left is the film advance key. This also is hinged when not in use. This must be used in conjunction with the red window (more later). This key also acts as a release for the film take up spool by being lifted up while film is being removed and a new empty spool is put in place.

The front of the camera has a bowed hinged door cover the lens when just not in use. This has an ornate an ‘V’ in the centre. There was also a recessed lever which does nothing while the camera is closed. This door is opened by pressing a recessed button on the base of the camera. When pressed, the door opens most of the way. Zeiss Ikon and  Balda cameras snap fully open but Voigtlander is a gentler company and it is necessary to fully open the door by hand. All my Voigtlander folders are like this (five of them) so I think it must be intentional. As the door opens, the lens comes forward on bellows. When the door is fully open, the lens is rigidly held in place at the right distance and parallel to the film.

The first thing to notice here is the yellow filter. Voigtlander supplied these fixed to the front of the lens with many of their cameras but they get broken off. This one is intact which together with the general finish of the camera suggests that it was never used very much. The filter is labelled ‘Voigtlander Moment’. For my younger readers, the purpose of the filter is the block some of the blue light in the sky making it darker and so making the clouds stand out more. This is only of any use with black-and-white film, of course. With colour film, the whole picture will come out yellow! As the filter is blocking some of the light, it is necessary to increase exposure slightly.

The lens is Voigtlander’s Voigtar lens. This is a triplet lens (three pieces of glass) with a maximum aperture of f/3.5. Its focal length is 75 mm. The negative size with this camera is 45×60 mm and the diagonal of the lens is 75 mm – the lens is a ‘normal’ lens for this film format. The lens will focus from 3 feet to infinity. Incidentally, this is a front cell focusing camera – only the front piece of glass moves to focus the lens which is not ideal but is a lot cheaper to make. 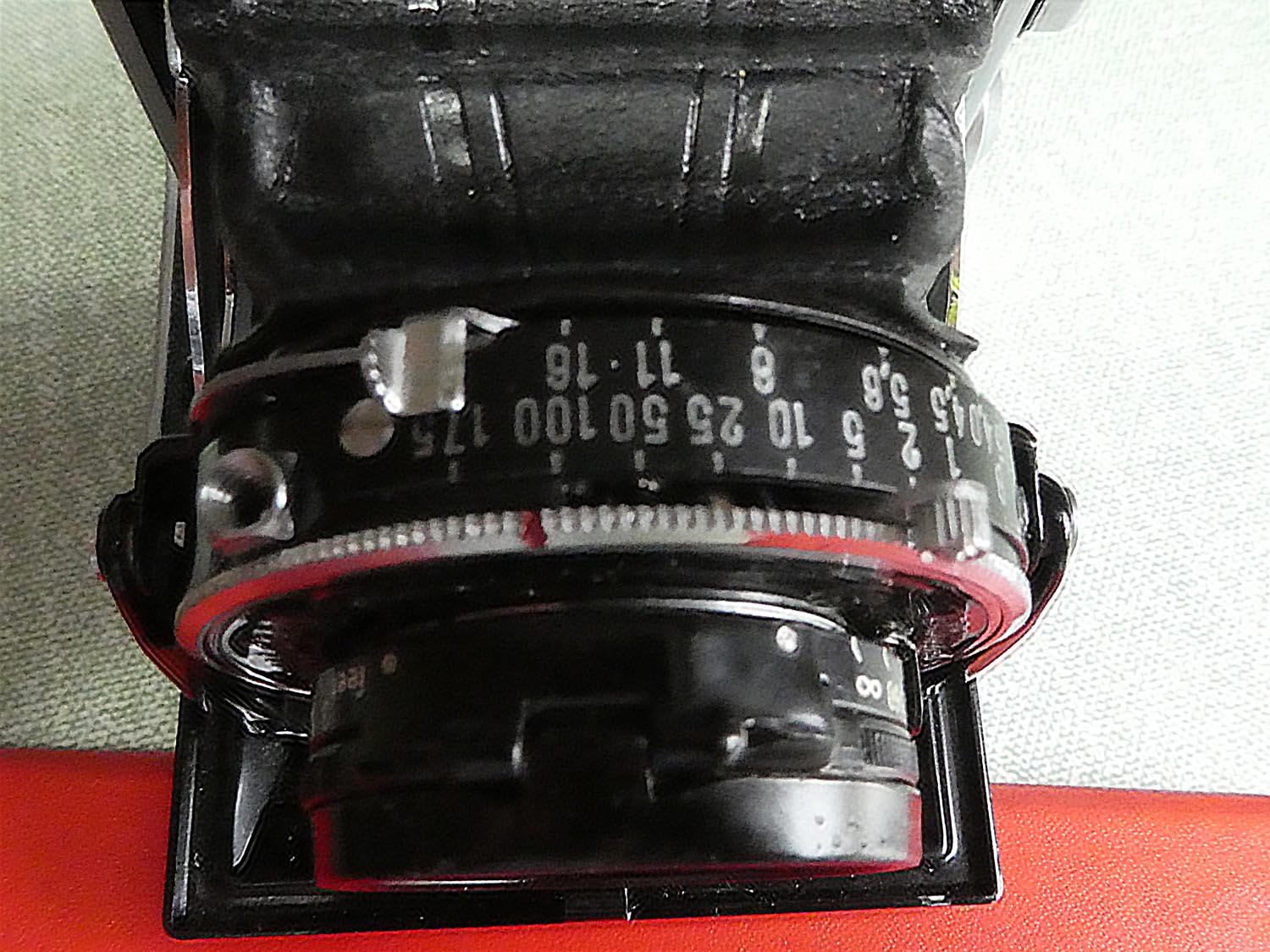 On the bottom of the shutter housing is a red lever. This is a delay action lever – pulling this to one side before firing the shutter delays it by about 10 seconds. The standard advice is never to use these on old cameras as if they go wrong they can wreck the shutter. On my camera, the delay action mechanism barely works at all. 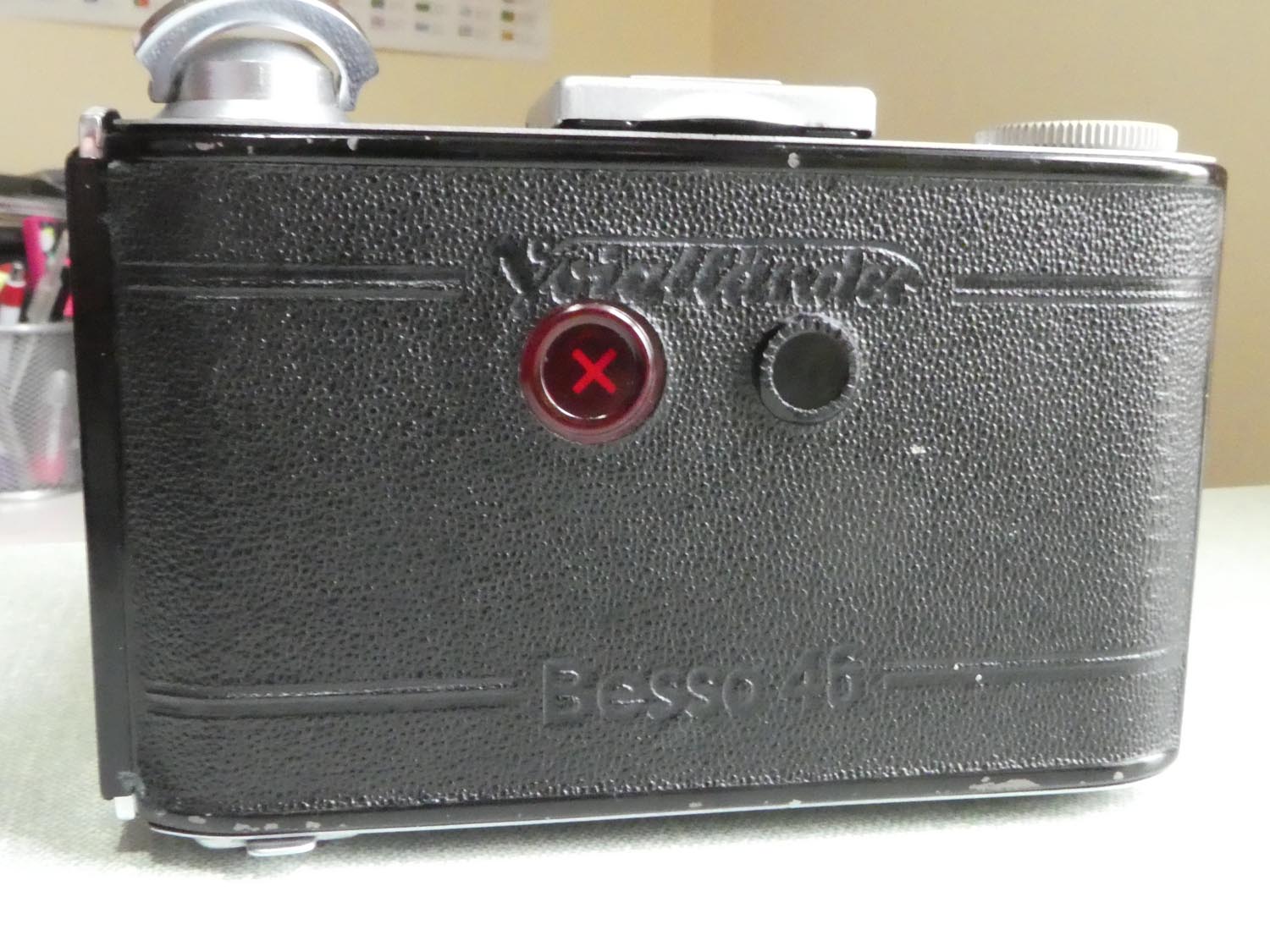 The back of the camera has the red window for reading frame numbers off the film backing paper. 120 film has three series of numbers on the back, one for ‘full frame’ which is 60 by 90 mm, one for square and one for ‘half frame’ which is 45 by 60 mm. This camera is a half frame camera and so uses the top row of numbers. The red window is fitted with a blind to stop light coming in and fogging the film. this blind has a clear ‘X’ printed on it. To remove the blind in order to read the frame numbers, there is a thumb screw beside the red window and rotating this exposes the frame numbers. 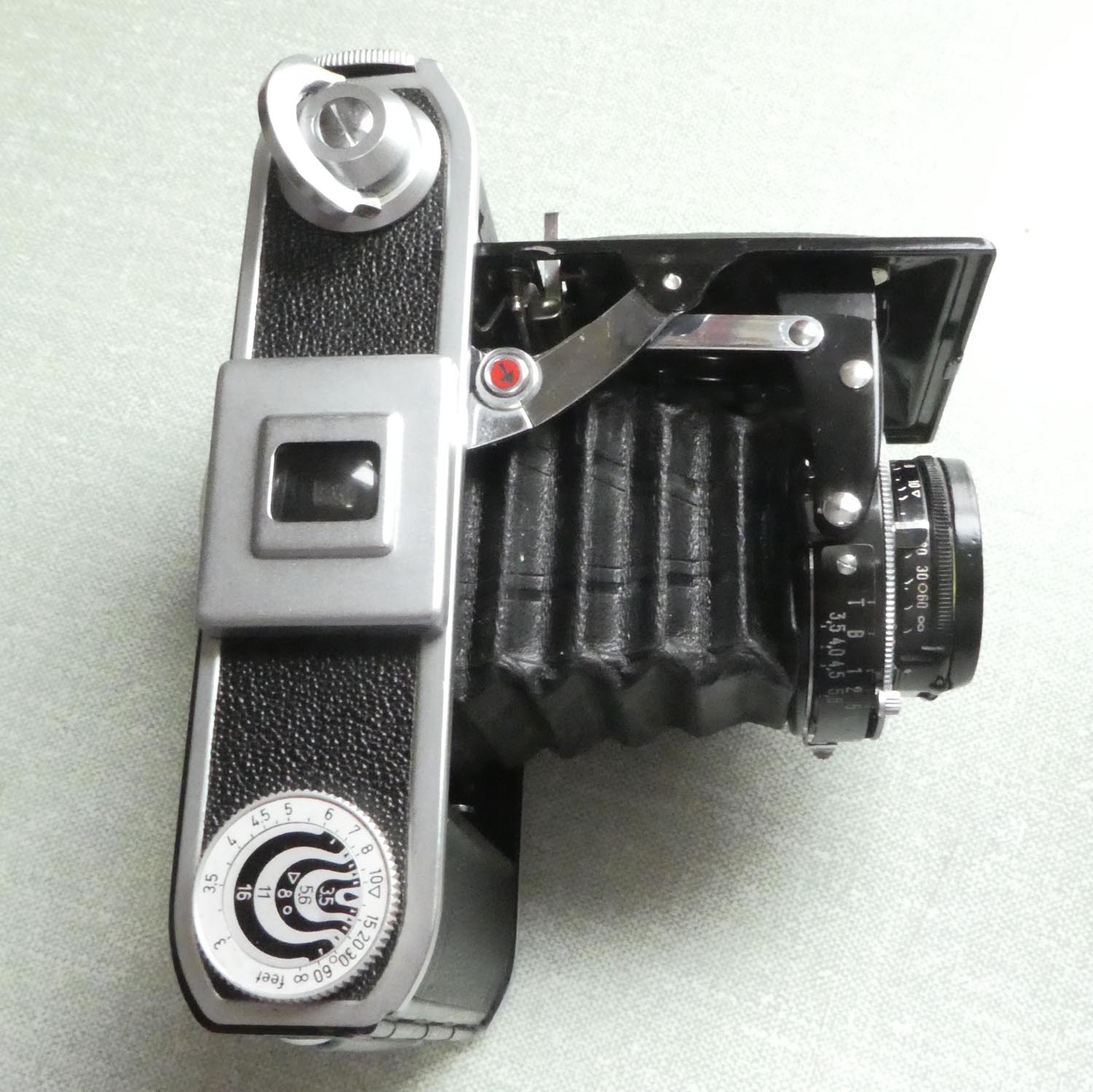 The base of the camera has a couple of items. As already mentioned, there is the recessed button for opening the lens door. At the end of the base is a combination item. In the centre of this is a tripod socket. This is the older 3/8 inch Whitworth threaded socket but has an insert in it with the more usual 1/4 inch Whitworth thread. Around this is a lever which can be rotated through 90°. When rotated, it acts as a foot to enable the camera to be placed on a firm surface in lieu of a tripod. This can be used in conjunction with the delay action device to take self portraits.

When this lever is not being used as a foot, it blocks the catch for the back, making sure that it is not inadvertently opened while there is film in the camera. To open the back, this foot must be rotated out of the way and the top and bottom milled chrome parts of the end must both be pressed in and the back then pulled open. 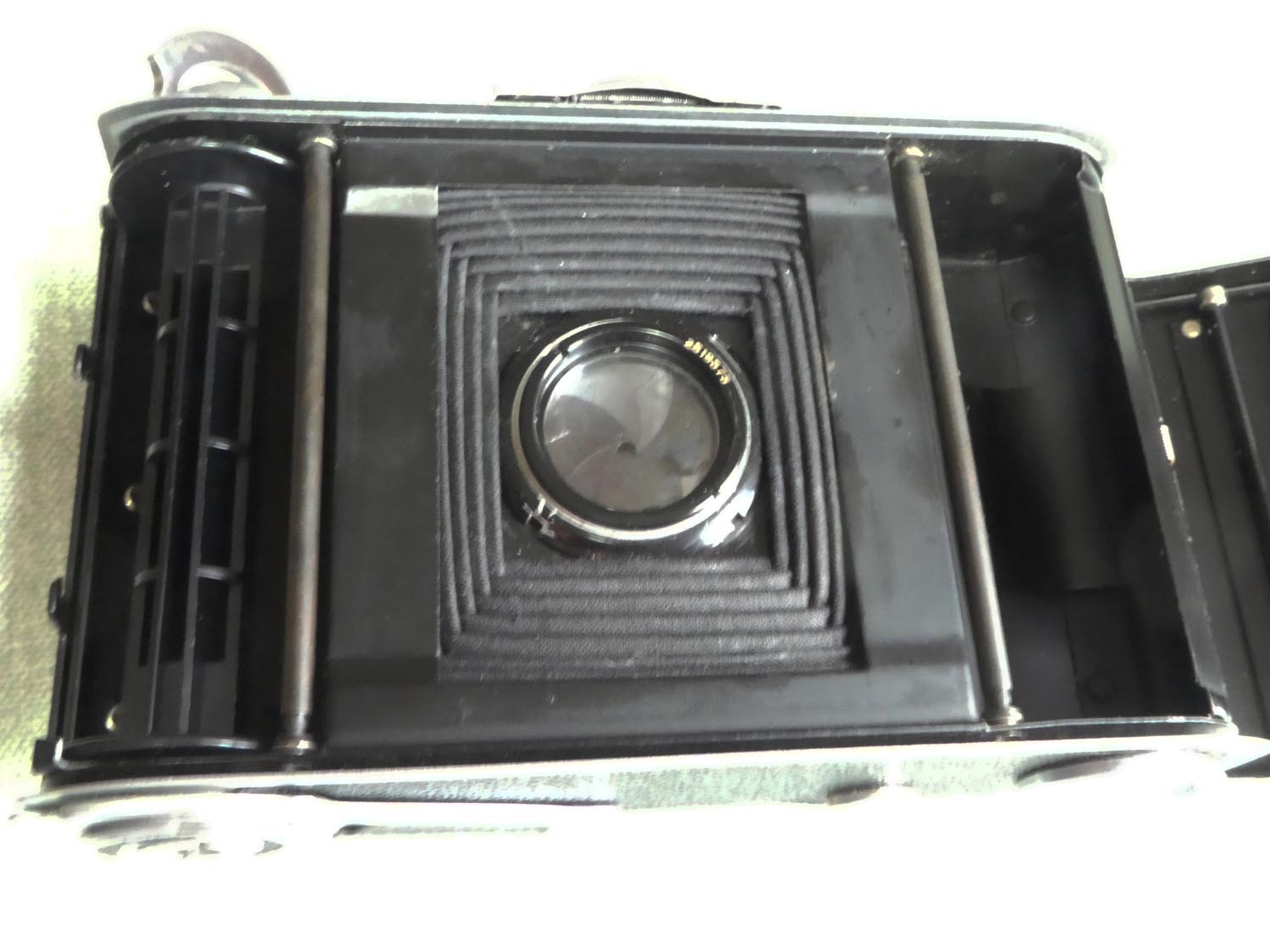 The new roll of film goes on the right in a carriage that is on a spring. When the new roll is in place, the backing paper can bet pulled across the film gate and the tapered end of the backing paper can be fed into the slot in the take-up spool. The take-up spool is then rotated using the film advance key on the top, pulling the backing paper until the paper is secure on the take-up spool. In any case, winding must stop if the word ‘START’ appears on the paper. At this point, close the back and open the red window. Continue winding the film until the number 1 appears in the window. This will be preceded by a series of circles or dots of diminishing sizes to warn you that the number is approaching.

I shall be trying this camera with a roll of Ilford FP4+ film. I usually use cheap colour film to test my cameras but no such is available in medium format and I have no 120 colour film to hand at the moment.

My test film is back from being developed and scanned by AG Photo and here are a few of the results. No light leaks visible. The negatives are slightly underexposed which is either the shutter (unlikely it will be running too fast) or my exposure meter. Either way, exposures are well within the latitude of the film. The photos: