Chinon do not have the good name and reputation of the big Japanese camera makers. Along with Cosina, they get thought of as cheap, bottom end of the market cameras. If truth be told, both Chinon and Cosina are excellent designers and manufacturers. In fact, Chinon were good enough for Kodak to buy the company in 2004. In its heyday, Chinon was at the forefront of camera technology.

This camera, the CE-4, is an electronic film SLR with both automatic and manual capability. It was introduced in, as far as I can ascertain, 1980 and uses the Pentax K mount although Chinon refer to this as a Chinon bayonet mount. This is the plain vanilla K mount for fully manual lenses, rather than one of the later versions with electrical contacts and focus drive shafts.

In front of the film advance lever is a small lever that is fairly unusual. Pulling this to the left while turning the film advance lever means that the shutter is cocked but the film is not moved. This allows you to have repeat exposures on one frame of film – no limit to how many exposures (other than the length of the film, of course). I have no idea why anyone would want to do this.

On top of the pentaprism hump is a hot-shoe accessory shoe. This is synchronised for electronic flash if you use Chino’s dedicated flash gun. This uses a second electrical contact to ‘talk’ to the camera and automatically sets the shutter speed to 1/60 seconds. For non-Chinon flash guns, the synch. speed must be set by hand – still 1/60 seconds for electronic flash and 1/30 seconds for flash bulbs.

To the left of the pentaprism hump is a standard fold-out rewind crank. This doubles as a door latch as pulling it up releases the back of the camera.

Around the rewind crank is the film speed selector. This is only in ASA (similar to ISO for younger readers). This also offers the facility to set exposure compensation by +1 or -1 stop in 1/3 stop steps. The ASA dial is locked in place and it is necessary to press a small chrome button while turning it.

On the left side of the lens mount are two items. The top one is a PC connector for flash guns that do not have hot-shoe connection (or for off-camera flash). The bottom item is a button for exposure memory. This is the oldest camera I know of to have this facility. To use this, you point the camera at something that has the tonality of your main subject and press this button. Keeping the button depressed, re-compose your shot and press the shutter release button. The main use for this is probably to avoid having the camera metering too much sky.

On the right hand side of the lens mount are a further two items. The top one is a depth of field preview button. Pressing this closes the iris diaphragm in the lens so the user can see the depth of filed of the final image. Below this is the lens relase button.

Close to the lens mount on the front of the camera is a delayed action control. This is entirely electronic. The user can select either a five second or ten second delay. Once set, it is actuated by the shutter release button. When actuated, the central red LED flashes – the speed of the flashes increases as it gets nearer to the shutter firing.

The back of the camera has one thing on it – a memo holder for the end of the film carton. This is an essential item that should be on every film camera. 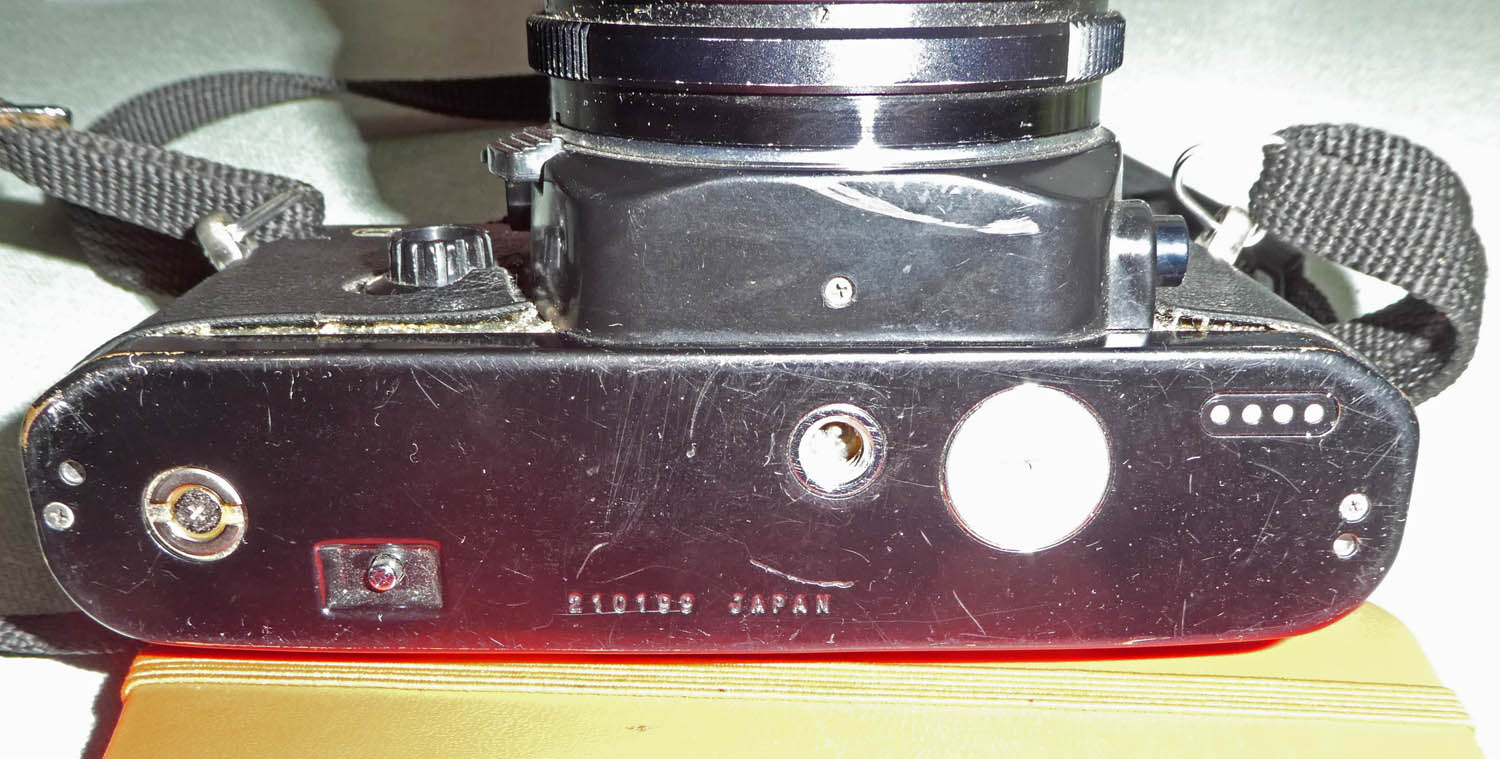 The base plate (which, incidentally, is made from brass) is relatively busy. Right by the lens is a standard (1/4 inch UNC) tripod socket and beside this is the battery holder. This takes three LR44 (or equivalent ) bateries which are readily available. My camera currently has three hearing aid Wein cells which are cheap but not very long lasting.

Also on the base plate is the attachment for a power winder. This consists of a locating hole at either end, four electrical contacts and a mechanical connection to the film advance system. As I do not have a power winder available, I can say no more about this.

Inside, the camera is as you would expect from an early 1980s film SLR. Film cassette goes on the left, shutter and film gate are roughly central followed by the sprocket shaft and then the take-up spool. The shutter is a Seiko electronic shutter. Being electronic, it will not work at all with flat or missing batteries. The upside is that the shutter speed is continuously selectable from 8 seconds to 1/1000 seconds in Auto (but not when set manually when only the shutter speeds on the shutter speed dial are available).

My overall, initial, impression is that this will be an easy camera to use. I have loaded a cassette of Agfa Vista+ 200 film (which is really Fujifilm 200 film) and now we shall see how easy the camera actually is.

I have now run a test film (Agfa Vista+ 200) through the camera and had it developed and scanned by Snappy Snaps in Lincoln. The camera is very easy to use on Auto – all the photographer has to do is compose, focus and press the shutter release button. I tried a few shots on manual – still using the built-in meter but adjusting the aperture until the meter was happy. This works fine as well as you might expect.

The meter is working well with the hearing aid batteries and the image density on the negatives is as I would expect a well exposed colour film to be.

The shutter is moving smoothly with no speed variation on either shutter curtain. The last two pictures below are with the lens at its closest focus position – again, focus is fine.

The lens is susceptible to flare when shooting into the light. None of the pictures were unusable and a lens hood might well have prevented any flare.