This is my third Icarette camera. My first is the Zeiss Ikon Icarette made in 1930 and my second was the Ica Icarette I (model 496) made, as far as I can tell, in 1918. This Icarette, also made by Ica and not Zeiss Ikon, would seem to be an Icarette II – model 498/1. I say “would seem to be” as I have had a good look in both a German and an American Ica catalogue for 1925 (the last year Ica was an independent company) and the combination of lens and shutter were not on offer in either.

The lens is a Novar Anastigmat with a maximum aperture of f/4.5. This is very fast for 1925 and Ica’s catalogues only offer a f/6.5 Novar. I had a thought that my lens was a later upgrade but that would involve a new shutter with a larger diameter lens mount.

The shutter is an Everest Gauthier shutter (it carries Gauthier’s logo on the front) where Ica’s catalogues only offers Ica’s own Automatschluss X with a Novar lens. I know with certainty that this is not the Ica shutter as that only offered three speeds while the shutter on my particular camera offers seven speeds from 1 second to 1/100 seconds. The only Gauthier Everest shutter to offer this speed range was the Ibsor. While Ica offered an Automatschluss shutter with this speed range, (the model XI), this had a horizontal cylinder behind the shutter speed dial. This is missing on my camera (and the shutter is clearly a Gauthier product with the Gauthier logo). Ica have helpfully used their own fascia on the speed dial where Gauthier would usually place the model name.

So, has the owner of my camera had an updated shutter and lens fitted to a low spec camera? This seems a strange thing to do rather than buy a better camera but it would also explain the absence of the name”Icarette” which I would expect to find under the lens but above the aperture scale on the front of the camera. If so, the work must have been done by Ica (or its successor, Zeiss Ikon), witness the legend “Ica Dresden” on the speed selector dial (a final thought: were both lens and shutter cannibalised from a different Ica model?)

Dating the camera is straight forward (ish). Ica used serial numbers of the form of one letter followed by five digits. When Ica merged with other camera makers to form Zeiss Ikon in 1926, Zeiss Ikon carried on with the same serial number system, starting with “L”. This tells us that the last Ica cameras used serial num bars with “K” (they might have used some “L” numbers as well, of course, Zeiss Ikon taking over part way through the series).

My camera has a serial number of K53636. This suggests a date of 1925. This is not helped by the lens serial number of 706481. I am assuming that this is a Carl Zeiss Novar in which case it was made in lateish 1926. Ica ceased to exist in October 1926 so was this camera made by Zeiss Ikon using parts made by Ica? This would help to explain the anomaly of both lens and shutter. 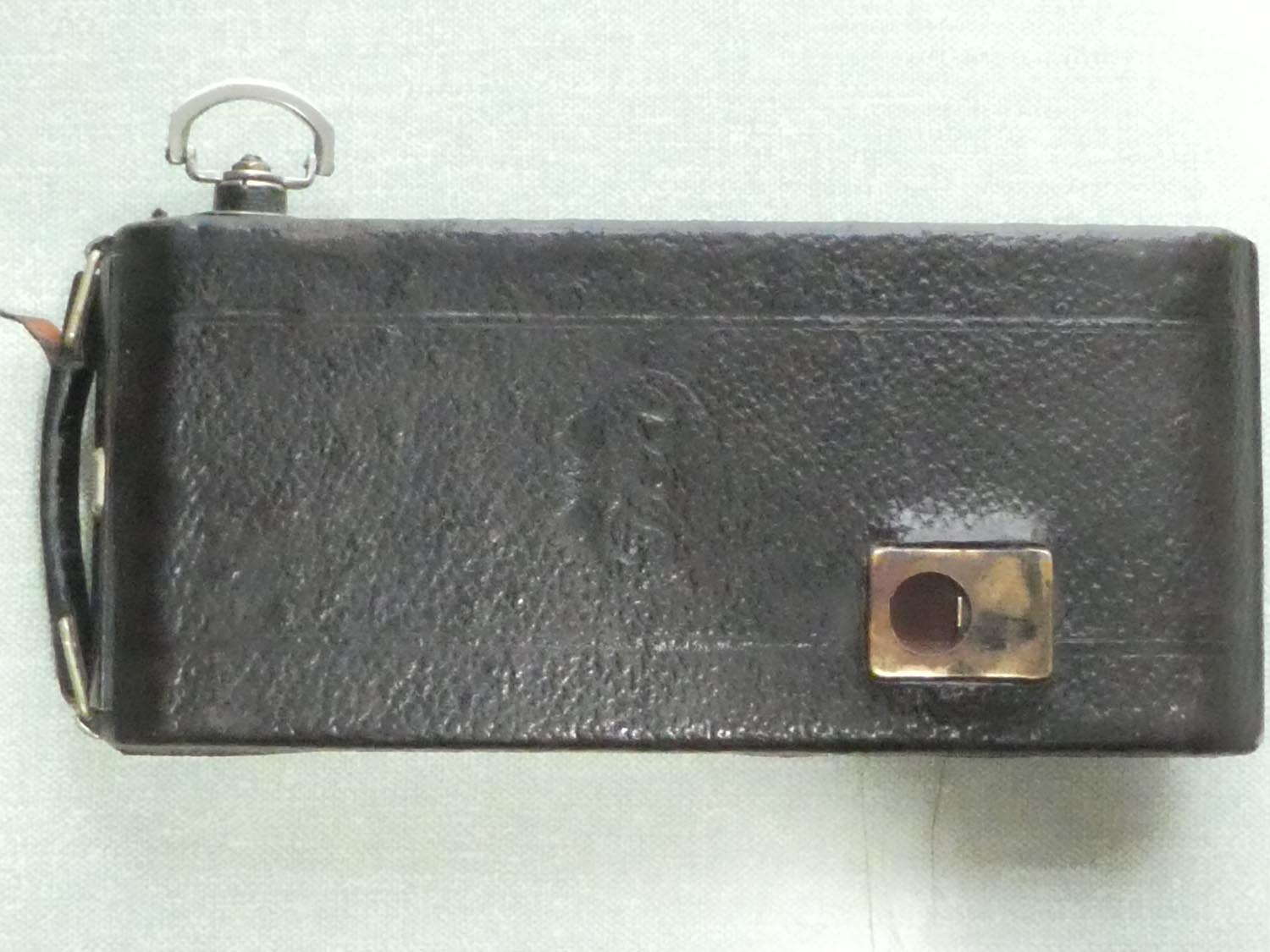 To open the camera, hold the camera so that the hinged baseboard is facing down and press the nickel plated stud by the film advance key. The baseboard should fall open. When clicked I’m place, it is held in place by a chrome plated strut on either side. To close the camera again, you need to press the tops of the struts down until they click and then fold the baseboard up.

Once the baseboard is in place, it is necessary to pull the shutter/lens assembly forward. there are two grips just forward of the shutter/lens which need to be squeezed to free the assembly. Pulling this forward, the shutter/lens assembly will stop at the infinity focus position. The catch for focus is on the left of the baseboard (left, while  using the camera). To focus nearer, you need to push the focus scale slightly inwards and pull the shutter/lens forward. The pointer for the focus is behind the lens standard on the left. There are four click-stops on the focus scale. Apart from the first, which is infinity, I cannot tell what the focus distances for the other stops are as the faux ivory scale is missing on my camera.

The shutter is simple to operate. There is a dial sticking up above the shutter housing – giving this style of shutter mechanism its name: dial set shutter – which rotates to set the shutter speed, the set speed being at the top. this shutter has seven speeds – each being half the time of the previous one (roughly, 1/10 to 1/is not exactly half).

The viewfinder on this camera is the small, hard to use, brilliant finder. When these are in very good condition they are hard to use but they do not age well. The reason is they rely on a small mirror which is bright plated directly onto steel and the steel is usually rusting under the bright plating. It is all that is available, though. Other,more expensive, Icarette models had an iconometer viewfinder which consisted of a large wire frame attached to the shutter housing and an eye-piece attached to the back of the camera – but this cheap camera does not have one.

The brilliant finder is hinged so that it can be used in both portrait and landscape orientation.

Underneath the baseboard is a folding brass foot for use when using slow shutter speeds – the camera will stand on a stable, level surface. If no suitable stable, level surface is available there are two tripod sockets with a 3/8 inch Whitworth thread (old cameras, Whitworth thread – modern cameras UNC thread. The difference between the two is negligible). One of these is under the baseboard and the second on the side of the camera near the hinge for the baseboard.

The aperture is adjusted by a very small pointer below the shutter housing. It is not actually difficult to adjust but is more fiddley than it needs to be. Available apertures are from f/4.5 to f/36 (f/4.5, 6.3, 9, 12.5, 18, 25, 36). This is not the standard range we are used to today, but moving from one number to the next is still  either twice or half the exposure depending on the direction of travel.

To load the film, it is necessary to get inside the camera. The catch for the back is below the (very) small carrying handle. Slide this to one side and the back comes away completely in one piece.

The empty take-up spool goes in the end with the film advance key. It is necessary to pull this key out – turn and pull works best. once this is pulled out, the nickel plated spool carrier will fold out. One end is on a spring and will pull out to allow easy insertion of the empty spool. With the spool in place, the carrier folds back in place and the film advance key can be pushed back in place – it needs to engage in the slot in the end of the spool.

The new film goes at the other end. There is no key here so the spool carrier folds out easily. The backing paper of the film pulls across the middle of the camera with the printing on the outside. Once the leader of this backing paper has been fed into the slot on the empty take-up spool, and wound on enough to be secure, the back must be refitted (older readers, please bear with me. I have younger readers who come from an entirely digital world).

Once the back is in place, the small blind on the back of the camera must be pulled down to reveal an orange window. Looking at this window, wind the film until the number 1 appears. First, there will be lines and dots. The dots (or circles, depending on the make of film) will get steadily smaller as the number approaches. The negative size on this camera is 6 by 9 cm which is full frame for medium format cameras. You only get eight pictures on one roll of film.