This is my second electronic Praktica – the other is the BC1. It has minimal controls – essentially the aperture – making it a very easy camera to use. 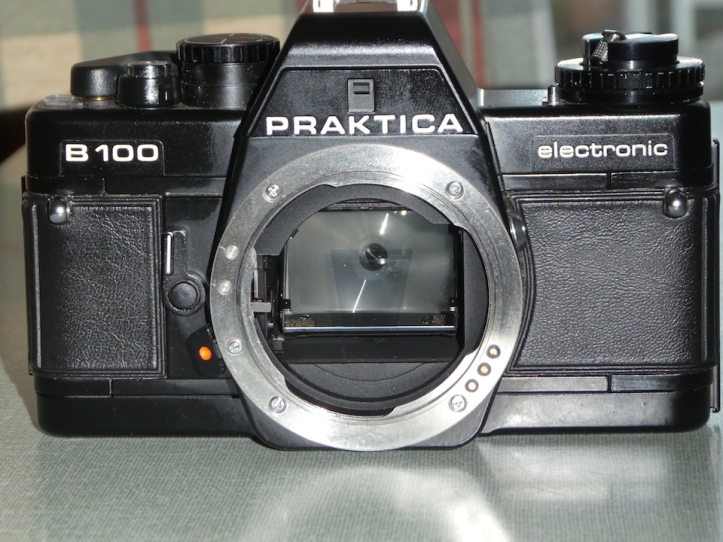 The shutter speed dial has three options: automatic, flash and B. There is also a battery test position. The only other controls on the body are film speed (both DIN and ASA) and exposure compensation (-2 to +2 in half stop steps).

The lens mount is the Praktica bayonet. This has three electronic contacts to allow the exposure system to read the set aperture

There is a frame counter beside the film advance lever which automatically resets to zero when the back is opened. The accessory shoe has electrical contacts for flash and so is a hot shoe. It is marked with a red X indicating that it is synchronised for electronic flash. There is also a PC connector on the side of the lens mount – no indication of what type of synchronisation for this but the manual says it is for electronic flash. The synchronisation speed is 1/90 seconds – the shutter speed dial must be turned to the flash symbol – this provides fully mechanical operation of the shutter and will work with no battery.

The front of the pentaprism has a small window to allow the aperture to be read through the viewfinder. The lens mount is the Praktica bayonet. This has three electronic contacts to allow the exposure system to read the set aperture – three contacts allows for eight different apertures: this lens has seven apertures available. Metering is through the fully open aperture. Closing of the aperture during an exposure is by way of a lever. Also on the front of the camera is a delay timer lever.

The lens supplied with the camera is a Pentacon Prakticar 1:2.4 50 mm lens. It is, of course at this date, multi-coated

The base plate has the battery compartment (which takes one 4SR44 6.2 volt or one 4LR44 6 volt battery. Both are still readily available), a central tripod boss (1/4 inch UNC), and a button to free the mechanism for rewinding the film. There are also a physical connector, two electrical connectors and a locating hole for a motor wind.

The back of the camera has what every film camera should have – a memo holder for the end of the film carton to make it hard to forget what type of film is in the camera.

The viewfinder is large enough and has an indicator for the film speed in use. This consists of a vertical list of shutter speeds from one second to 1/1000 seconds. The speed in use is indicated by a meter needle. There is a mark by the 1/250 speed which is where the needle needs to rise to in order to show that the battery is good when using the battery test function. At the bottom of the viewfinder is a window to show the aperture in use.

This camera goes one better – the split-image wedge splits the image into three rather than two, which makes it that bit easier to use

The film speed for the film in use needs to be set for the light meter ands this is done by gently lifting the ring around the rewind crank and turning it until the required speed is visible in the window. There are two windows – the one in front has ASA number and the one at the back has DIN numbers.

There is also an exposure compensation control here. To set this, you need to press the small chrome button and turn the ring around d the rewind crank.

The lens supplied with the camera is a Pentacon Prakticar 1:2.4 50 mm lens. It is, of course at this date, multi-coated. This is a very slim lens – only 25 mm from mount to end – entirely plastic but sturdy and nicely made. Maximum aperture is f/2.4 so not a very fast lens and minimum aperture is f/16. There are six aperture blades. Nothing outstanding but a good work-a-day lens. 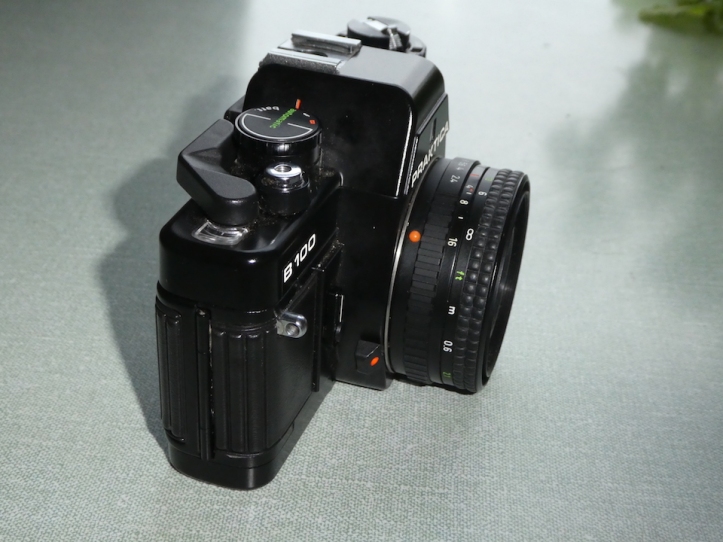 The focus ring turns through out 330° so it is not a fast lens to focus but easy to get critical focus. For those used to trying to manually focus a modern DSLR lens, this is a doddle. To aid focussing, the focus screen has a ring of micro-prisms and a split-image wedge. It is worth saying a bit about this last. Split-image centres to focus screens were very common on film cameras and work by the user turning the focus ring until the two parts of the split-image are aligned. This camera goes one better – the split-image wedge splits the image into three rather than two, which makes it that bit easier to use. These split-image centres only work where there I a strong line in the image – usually there is – and this centre is at a 45° angle so it will work with horizontal or vertical lines equally. Where there is no strong linear component in the image, the ring of micro-prisms comes into its own. You merely focus until you can no longer see the micro-prisms. 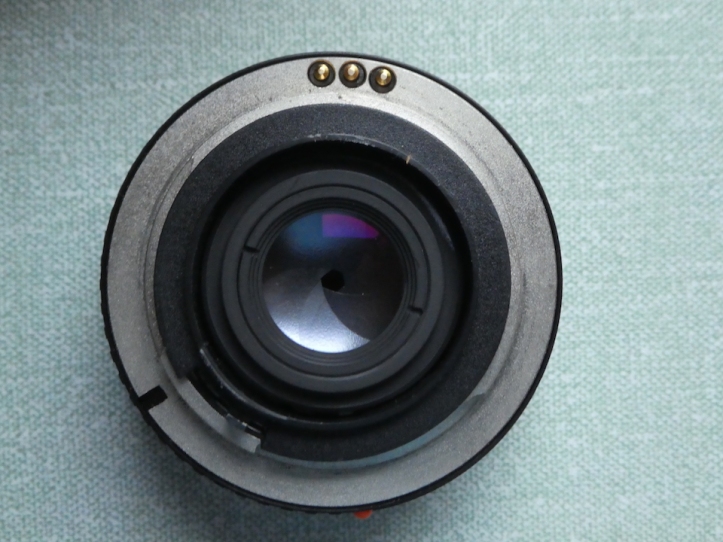 There is not a lot more to say about this camera. The plastic body has soft ‘leatherette’ which makes holding the camera comfortable. There are eyelets on the front to connect a neck strap.

I have now tried this camera with a test film – Agfa Vista+ as usual – and the results are here. The camera iteself is comfortable to use and the necessary controls fall easily to my fingers. Colour rendition is good as is contrast. Focus using the double split-image wedge is spot-on. Several of the pictures were taken contre jour (i.e. into the sun) with no ugly flare – I quite like the star-burst in the first picture. 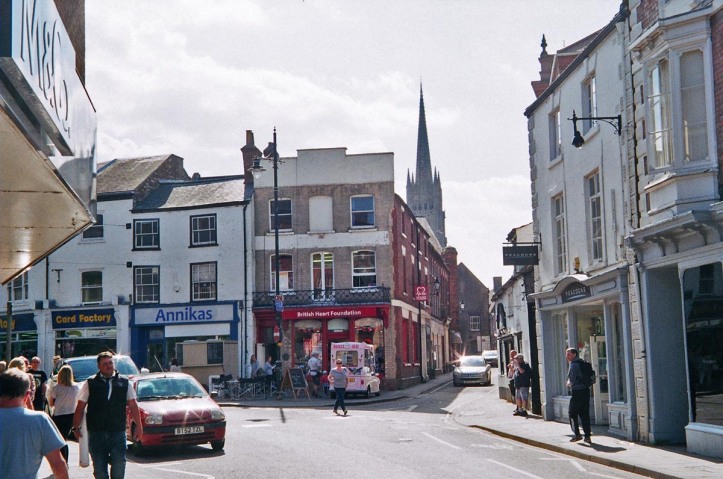