This is a 35 mm viewfinder camera from the Soviet Union. It  is not quite a point-and-shoot but not far off. There are the usual settings of shutter speed, aperture and distance, but no light meter or rangefinder.

The top plate is a firm grey plastic with a ‘leatherette’ pattern embossed on the top surface. On the right is the film advance. This is a wheel which slightly protrudes from the edges of the top plate. This is a simple mechanism directly attached to the take-up spool inside. There is no ratchet or clutch here.

In the middle of the top plate is a combined frame counter and film reminder. The frame counter counts up from zero to 38 and needs to be set to zero by hand after loading a new cassette of film. The film reminder has no function apart from being a mnemonic. The options are film speeds in DIN and ASA from 15 DIN (25 ASA) to 24 DIN (200 ASA).There is no Gost speeds here.

Left of the frame counter is the accessory shoe – no electrical contacts here so a cold shoe. On the far left of the top plate is a milled stainless steel disc with a curved arrow engraved on it. this pulls up to be the rewind knob. It is rather small and rough for my fingers.

The back of the camera is opened by a simple slide catch on the left. The back is not hinged and comes completely away. it is made from black plastic with a smallish pressure plate in the centre. On the outside of the back is a small metal stud which is the fixing for the pressure plate.

The main body of the camera is also made of black plastic, again with a leatherette patterned surface. In the centre of the front is the shutter/lens assembly. This manages to look distinctly Soviet, to my eyes. The lens fascia is marked ‘Lomo’ (actually, it is the Cyrillic equivalent – ЛOMO). This tells me that this Cosmic 35 camera comes from the Lomo factory in Leningrad (now St Petersburg).

The shutter speed ring is closest to the camera body. The available speeds are 1/15, 1/30, 1/60, 1/125 and 1/250. These are also marked with the numbers 4 to 8 – more of these later. Just to the right of the speed scale is the shutter cocking lever. this has to be pulled down to set the shutter ready for use.

Next out from the body is a sloping surface with a depth of field scale – very useful for setting the lens’ hyperlocal distance (which, at f/16, is 6.5 feet giving a depth of field from 1 m to infinity). next to this is the lens focus ring. This turns almost a complete circle to focus from 3 feet to infinity.

The aperture ring is actually between the lens fascia and then glass and is rather hard to get at. This offers apertures from f/4 to f/16 – these are also marked with digits from 4 to 8. (these digits are marked on the opposite side of the facia to the f/ numbers but are selected by the same ring). There is only a very small red index mark on the aperture ring making setting the aperture harder than it might be.

The reason for these extra digits is ingenious. If you are using a light meter that gives EV values (my Zeiss Ikon Ikophot does) the shutter digit added to the aperture digit must be the required EV value. To look at it another way: light meter says EV14. You want an aperture of f/8 which has the digit 6. EV14 minus aperture 6 gives a shutter speed of 8 which is 1/250 seconds. Again, light meter says EV12 and you want a shutter speed of 1/125 to avoid camera shake. 1/125 has the digit 7 so EV12 minus speed 7 gives an aperture of 5 which is f/5.6.

The lens itself has a focal length of 40 mm and a maximum aperture of f/4. The fascia is also marked as T-43 which I assume is the lens name. The iris diaphragm has eight blades.

On the bottom of the camera, there is only the tripod boss. This is 3/8 inch thread – the Interweb suggests that the Cosmic 35 only had the 1/4 inch tripod boss, the 3/8 inch being only found on the earlier Smena cameras but I can only report what I see.

Inside the camera: this is still all black plastic (this is a good, sturdy, well made plastic moulding). On the left is the space for the film cassette. This has two prongs that engage the cassette spool for rewinding the film. On the right of the camera is an identical space with two prongs to engage with the take-up spool for rewinding the film. Again, the Interweb suggests that Cosmic 35 cameras had a fixed take-up spool but that is not the case here. In common with other FSU cameras (Fed, Zorki, Kiev) the take-up spool is removable (and missing in my camera) and can be replaced with an empty cassette to remove the need to rewind the film. 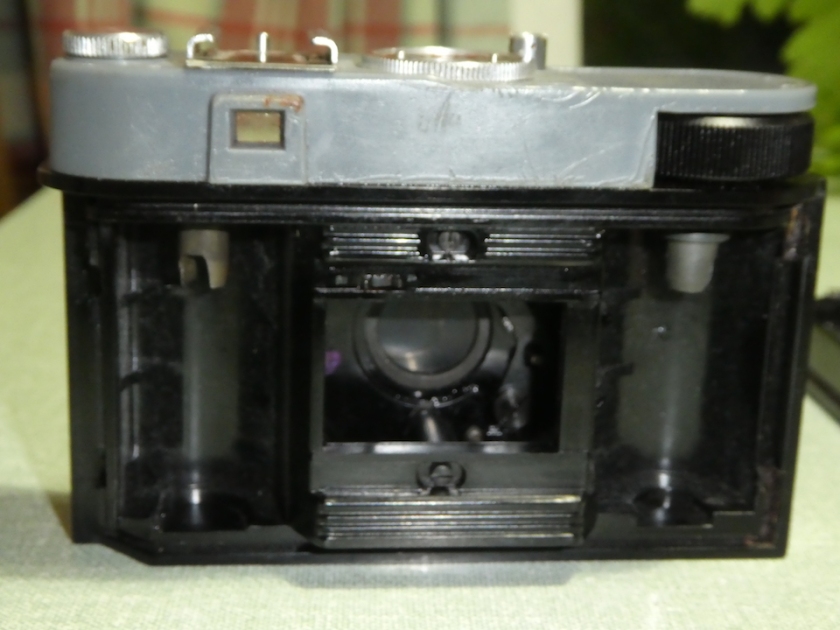 The other thing to note inside the camera is the presence of a sprocket wheel above the film gate. This is reminiscent of the Voigtlander Vito B. This wheel counts the sprocket holes passing the wheel and stops the film advance when 8 holes have passed which equals one frame.

This camera is defective – the sprocket wheel is seized making the camera inoperable so I will not be testing this camera with film.