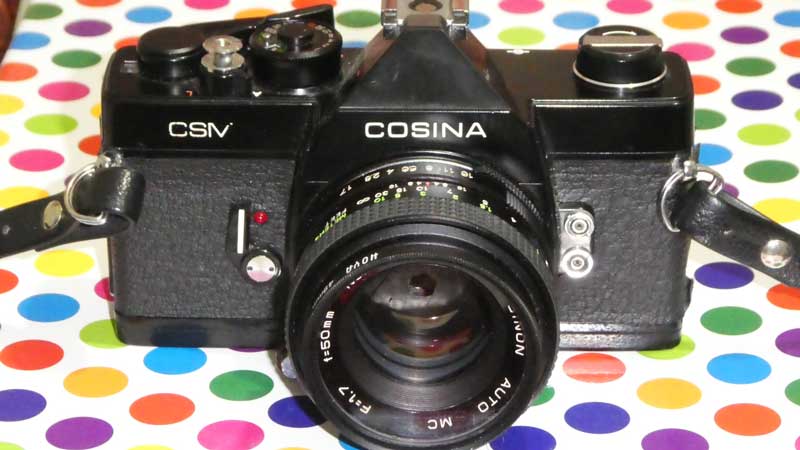 As I have mentioned elsewhere in this blog, Cosina have an undeservedly poor reputation. In fact, in addition to their own designs made under their own name, they make cameras for the big-name camera companies. The Zeiss Ikon rangefinder was made by Cosina as are many Carl Zeiss and Voigtlander lenses.

This camera is a Cosina design sold under their own name. It is fairly basic but with an electronically controlled shutter. I can tell that the shutter is electronically controlled because it  works without batteries but at the same slow speed regardless of the speed setting (a fully electronic shutter would not work at all without batteries). With batteries the shutter speeds are clearly variable.
The top plate is standard for a camera made in the late 1970s (introduced in 1978, I think). Far right is a small window for the frame counter. This is reset to zero when the camera back is opened. Next is the film advance lever. This is a metal plate covered with a plastic casing. It sits just proud of the back and is easy to use. It moves through about 210 degrees to advance the film one frame.It is not on a racket so just be moved in one motion.
In front of the advance lever is the shutter release button. this is chrome plated and threaded for a standard cable release. Below the shutter release is a lock switch. It has two positions – A and L. A is the working position and L is the lock position. I quite approve of shutter locks as over the years I have wasted many hundreds of frames of film by accidentally tripping the shutter. This lever is black.
Next along is the shutter speed dial. This runs from 4 seconds through 1 second to 1/1000 seconds. 1/60 is marked in red and I am sure will be the flash synchronisation speed. There are also positions marked in green – M and B. I have no idea what the M position is for and it is not mentioned in the manual (available from Butkus’s website). B is for Bulb and is the standard of the shutter remaining open whilst the the shutter release is depressed.
Nested in the tangle of the film advance lever is a small chrome button. Pressing this disconnects the film advance mechanism to allow the film to be rewound.
The pentaprism hump has the accessory shoe on it. This has electrical contacts (so a hot shoe) synchronised for electronic flash (indicated by a red X). Cosina made an automatic exposure device which sat on this accessory shoe and connected to the shutter speed dial – this dial has a raised pin to allow the auto exposure accessory device to turn the speed dial, giving the camera aperture priority automatic exposure.
On the left of the pentaprism is the rewind crank. This is the usual fold-out type. The crank pulls up – to the first position to release the cassette in the camera and to the second position to unlock the hinged back. Between the pentaprism hump and the rewind crank is a white painted circle with a white line through it. The line represents the position of the film plane.
The front of the camera is fairly plain. most obvious is the lens mount. This is a 42 mm threaded mount – frequently known as the Pentax thread mount. This was the standard lens mount for several decades and so there are a vast number of lenses still available for this camera. The mount takes automatic aperture lenses (as well as older manual aperture lenses). There is a plunger at the base of the lens mount, just inside the thread. When the shutter release is pressed, this plunger moves forward and depresses a pin on the lens to close the aperture to the preset value. This ties in with the TTL light meter (TTL = Through The Lens). You focus and compose with the aperture wide open (and so with a bright image) and as the shutter release is half-way pressed, the aperture closes and the meter reads the light level. You then either adjust the aperture or shutter (or perhaps both) until the centre greed LED in the viewfinder is lit. Pressing the shutter release the rest of the way releases the shutter and takes the picture.
Next to the lens mount at the bottom is a small chrome button. Pressing this allows the aperture to open again while the shutter release is partially depressed. You might think it easier to just take your finger off the shutter release button but the plunger does not return to its rest position if you do. If you want to re-compose or re-focus, you need this button.
On the right-hand side of the lens mount is a self-timer lever. This is turned through 90 degrees to set the mechanism.It is released by the shutter release in the usual way. On most cameras, These self-timers are clockwork and you can hear them ticking as the lever rotates back to its start position. Not here. This is an electronic device and the lever does not move back. Instead, a small red LED above the lever flashes once a second for ten seconds. After ten seconds, the shutter fires and the lever snaps back.
On the left of the lens mount are what at first glance appear to be two PC (Prontor Compur) sockets. In fact, only the lower one is – it is marked with a red X. This is for attaching an off-camera flash gun by a cable and is synchronised for electronic flash (by the late 1970s, bulb flashes were no longer usual and not catered for). The top connector is not quite the same as a PC connector and is designed for the automatic exposure device I mentioned above. It is marked with a green A. (Is this what the M setting on the shutter speed dial is for?)

On either side of the front of the camera are strap lugs – a small but very important feature to me.

The base of the camera has a battery compartment. It takes two LR44 (or SV44) batteries (which are still available). These power the light meter and the electronic shutter. There is also a standard tripod boss – 1/4 inch UNC thread. This is quite aeriously offset from the centre of the camera which means the camera is likely to slope when on a tripod, particularly if a cheap tripod is used – this is a cheap camera so I don’t supposed anyone would have used an expensive tripod.
Inside the back of the camera there is little to note. The shutter is a horizontally moving cloth shutter – absolutely standard at this time. The take-up spool has eight attachment positions of a fairly standard design so attaching the film leader would be easy enough.
Being Japanese, the camera relies on foam light seals to keep the film compartment light tight. This camera is 35-odd years old and the foam has long turned to sticky dust. The remains will need to be cleaned out and replaced with new foam before the camera can be used. This is a simple enough job, even for me.
Inside the viewfinder is uncluttered. There is a ground glass focussing screen with a horizontal split-image spot in the centre and around this is a circle of micro-prisms. The split-image centre works by placing it over a suitable vertical edge in the image. This edge will be split – part to the left and part to the right. When you focus the lens, these two parts move and line up with each other when the focus is correct.
In the absence of a suitable vertical edge, you use the micro-prism ring. When the image is unfocussed, this ring has a very granular appearance. As you get nearer to good focus, the granularity gets less and disappears at good focus.
At the top of the viewfinder are three LEDs. The central one is green and the other two are red arrows. While pressing the shutter release halfway, you adjust the aperture/shutter speed combination until the central green LED is lit steadily. The left hand red arrow lights up when you have too much exposure and the right hand arrow lights up when you have too little exposure. Very easy to use in practice.
The supplied lens – the kit lens if you will – is a Cosina made Cosinon lens – 50 mm focal length and maximum aperture of f/1.7 (and why not the industry standard of f/1.8?). The lens is multi-coated as you would expect from the late 1970s. This lens has an aluminium barrel and appears to be very well made.