This was one of my better buys from Ebay. I have two BC1 bodies, a Prakticar 50mm lens and two straps for £5.00. With one camera, the internal meter agrees with my hand-held Ikophot light meter. The other is six stops or so out. It is quite possible that this is down to dirt on the meter sensor. As the meter is not accessible without removing the top plate and the controls on there, I shall not be having a look.

I am going to be quite fast with this description. SLR cameras have a pretty much standard layout and there is not a lot to be gained from repeating this is detail for each camera.
So, right to left on the top of the camera:
Frame counter. this resets to zero when the camera back is opened. The main numbers are in white. The even numbered frames have numbers and the odd numbered frames only have dots. Frames 20 and 36 are in red as these were the standard lengths of films. the frame counter will go to 37 and then stops even though the camera will still advance the film beyond 37 exposures.
Next is the film advance lever. this moves through around 135 degrees to advance the film one frame. The lever has a parked position where it is flush with the camera body. In use, it sits slightly proud of the body which makes it easier to use. It is black plastic and is quite comfortable to use.
The shutter release button. It is chrome plated and threaded to accept a standard cable release. Around the chrome button is a black collar which can be turned clockwise to lock the release button.
Just left of the shutter release button is the shutter speed selector. This has a green automatic setting which is how the camera is intended to be used. In this position, the camera selects the shutter speed to achieve correct exposure. The camera is not restricted to the standard range of shutter speeds and can select intermediate values to get the exact shutter speed required. There are also manual speeds available. These are the standard sequence up to 1/1000 seconds. The shutter is electronically controlled and in the absence of electric power the shutter works mechanically at 1/90 seconds – which is also the flash synchronisation speed.

Almost centrally is the pentaprism hump.  On top of this is the accessory shoe with ‘hot shoe’ electrical contacts. This has the standard central contact and a second, smaller, contact for the Praktica computerised flash gun. Connecting the Praktica flash automatically sets the shutter to 1/90 seconds. Cold shoe flash guns will also work as there is a PC socket as well as the hot shoe connector.

Left of the pentaprism hump are two buttons. The first is black with a chrome collar. This has two functions. It is used to test the battery (doesn’t seem to work on my camera, even though I know the battery is good). Its second function is to lock exposure if you wish to set the exposure away from your area of composition – such as pointing the camera down to avoid the sky, pressing this button and then raising the camera to take the shot. There is also a small chrome button which is used to release the exposure compensation ring.
On the far left is a multifunction knob. The outside lifts and rotates to set the film speed. This is in both DIN and ASA and runs from 12 to 36 DIN or 12 to 3200 ASA. Above this is the exposure compensation ring. This runs from +2 to -2 stops and will only turn if the chrome button is depressed. In the centre is the rewind crank. This is of the folding varietal that was now normal at the time this camera was made. This crank lifts to unlock the camera back and release the film cassette.
The back of the camera has two items. At the top is the viewfinder eyepiece. This is nice and large and is surrounded by a rectangle of hard black plastic – which is why my glasses get horribly scratched. The view in the viewfinder is plenty large enough and good and bright. The main focusing screen is a Fresnel lens  – which is why it is bright – and in the centre is a ring of plain ground glass. Inside this ring is a second ring of micro-prisms as a focusing aid and in the very centre is a ‘triple wedge’ which is a very nice variation on a split-image focusing device. This works very well.  Down the left side of the focus screen is a list of shutter speeds. With the shutter speed selector set to ‘automatic’ a red LED will light beside the selected shutter speed. If you set the shutter speed selector to a shutter speed, the set speed will have a flashing LED beside it and the suggested speed a steady LED. At the bottom of the viewfinder  is the selected aperture – this is reflected from the lens through a small window on the front of the pentaprism hump.
Below the viewfinder eyepiece there is a holder for the end of the film carton to act as a reminder of the film in use.

On the front of the camera are various items. Towards the top on either end are lugs for attaching a neck strap. More or less centrally, is the lens mount. This is a three bayonet mount with three electric contacts for reading the aperture setting (I assume this is in Octal giving a range of eight possible f/stops).

To the right of the lens mount is the lens release button. This is black with a prominent red dot. To fit a lens, the red dot on the lens is aligned with this red dot and the lens inserted into the mount and turned clockwise. To remove the lens, this button is depressed and the lens turned anti-clockwise for removal. Above the lens release button is a slider that moves vertically. Pushing this lever up closes the lens diaphragm so the photographer can see the depth of field of his selected aperture. This lever works by engaging with a lever on the lens which is used by the camera to stop down the lens when taking a picture. Right by the lens mount is a second lever. This one turns rather than slides and rotates anti-clockwise to set the self-timer. The timer to actuated by pressing the small black button on the middle of the lever. This gives a delay of 6 seconds on my camera. On the left side of the lens mount is the PC socket for a ‘cold shoe’ flash gun. 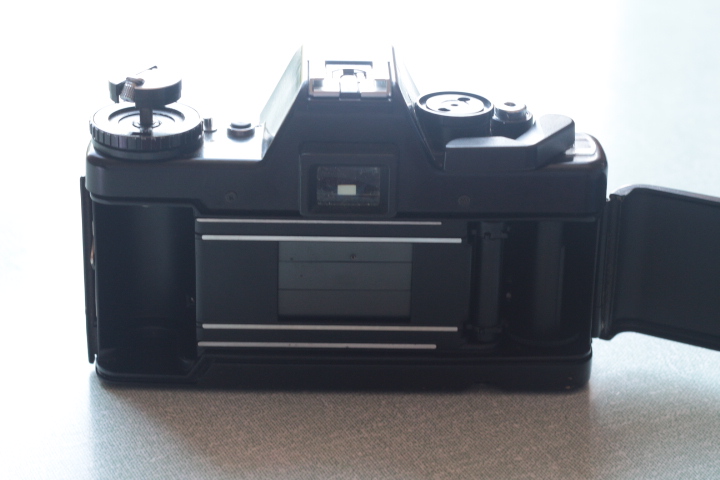 There are also several items on the base plate. Almost centrally, is the ubiquitous tripod boss – 1/4 inch Whitworth/UNC. In front of this is the battery compartment. This takes a A544 6v battery – still readily available. On the right-hand end of the camera is a connector for a motor-drive. This consists of a mechanical screw connector, two electrodes and a locating hole. As I do not have the motor-drive, I can say no more about this.

The lens that came with the camera is a Pentacon Prakticar lens. Its focal length is 50mm – so ‘normal’ for 35 mm photography (ie se pretty much the same view as a human eye) and its maximum aperture is f/1.8. Its minimum aperture is f/16. The focal range is from 0.45 metres to infinity.  As was usual with film cameras, there is a DOF scale printed on the lens which, among other things, makes hyperfocal focusing much easier than it is with modern digital lenses. The throw of the focusing helical is somewhere around 300 degrees – ie you need to turn the focus ring through 300 degrees to go from minimum to maximum. This makes it easy to focus accurately but hard to focus quickly. There is also an infra-red marker. If you are using infra-red film, focus is not quite the same as with visible light so you have to focus normally and then move the focus marking to the red dot. For instance, if you are focused on 8 metres move the 8 from the usual red line to the red dot.  Both the line and the dot are visible on the photo below. The lens is multi-coated which is as we would expect from any lens from this period.

I have now completed my test film. I am impressed with this camera. Exposure and focus are both spot on (it is manual focus but the focus aids in the viewfinder are working well). The only fault is that there is a curved pale line at the top of the frame in every shot. As the defect is at the top of the image, it must be at the bottom of the film gate – there is nothing visible to my naked eye that could cause this. My only thought is that there might be a small nick in the black paint on the metal shutter blades that is causing a slight reflection as the shutter fully opens (it opens downwards). 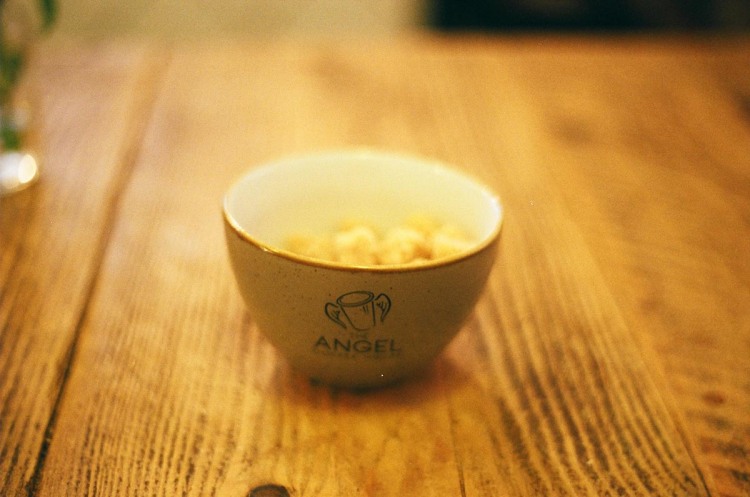 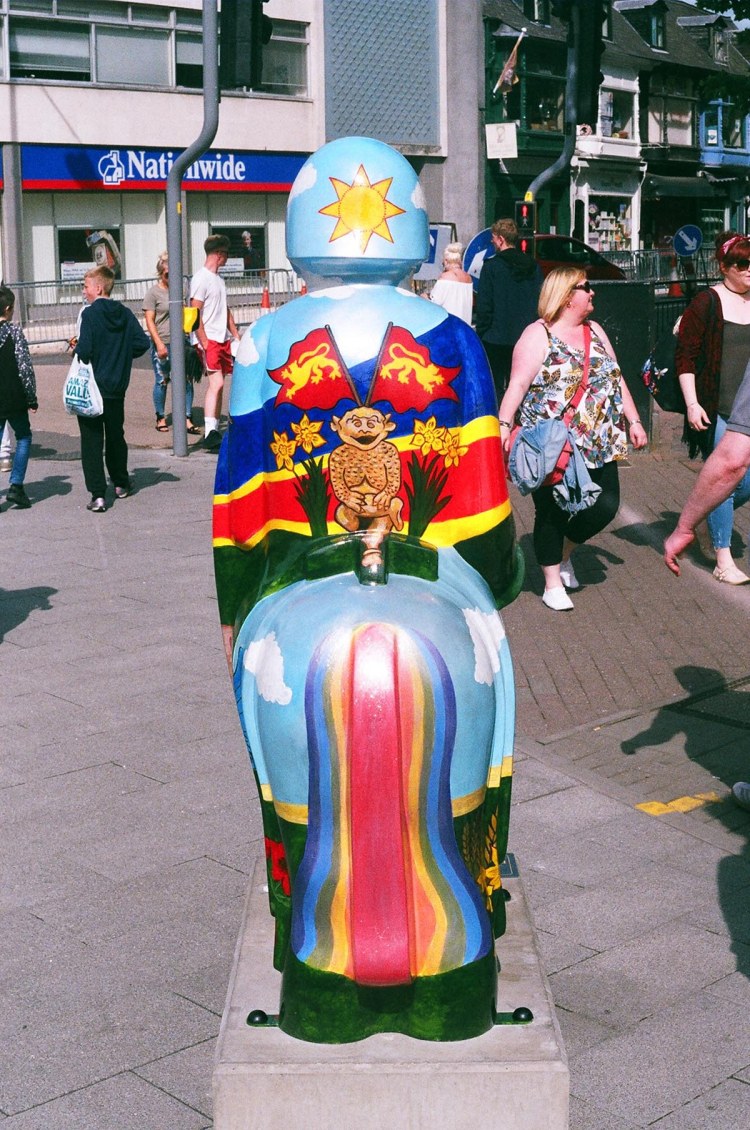 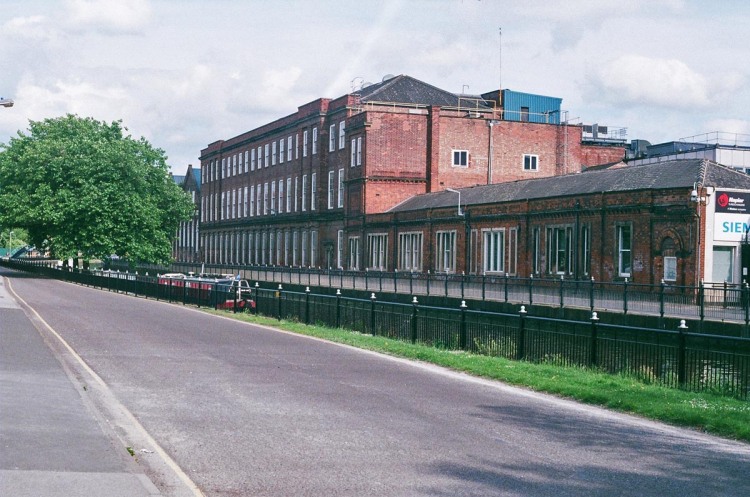 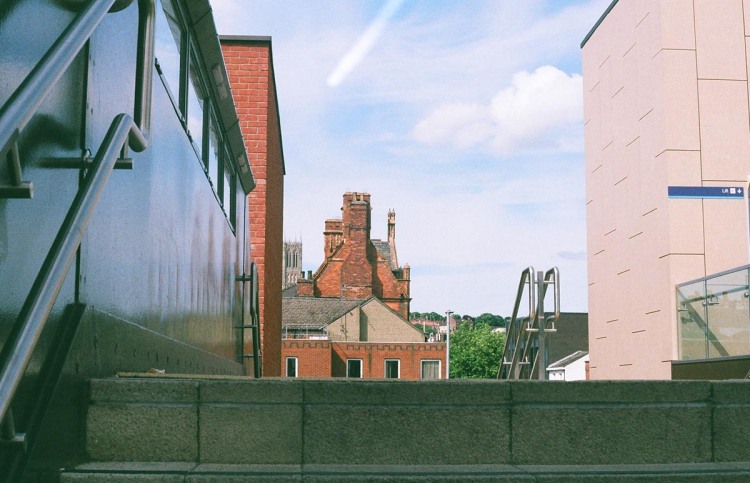 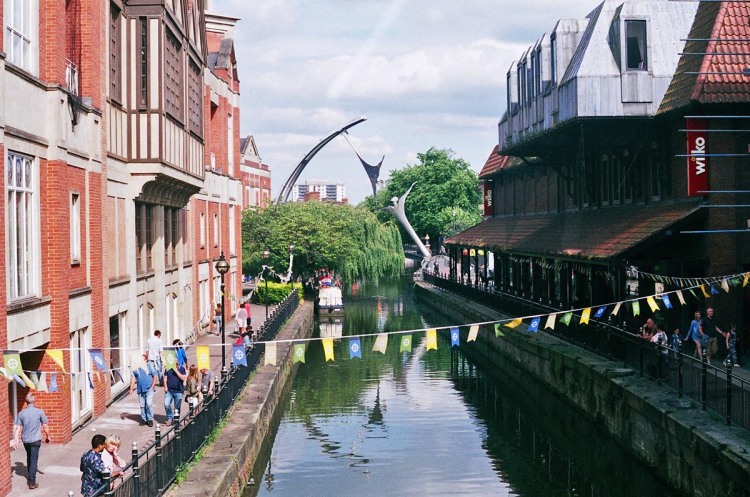 One thought on “Praktica BC1 electronic”