Pentax were the leading 35 mm SLR cameras through the 1960s and 1970s. During the 1980s, there were a lot of technological advances (not just in photography) and Asahi (the makers of Pentax cameras) were leading the push to develop modern automatic cameras.

The act of producing cutting edge, state of the art cameras necessarily meant also making mistakes. There were a number of innovative dead-ends during this period and the result was that Asahi lost their lead as prime camera makers to Nikon and Canon. 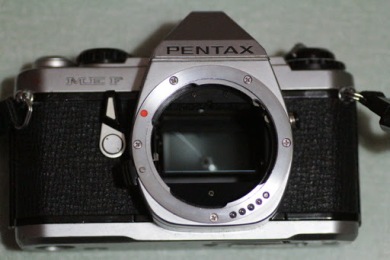 With this particular Pentax model the innovation was auto-focus. This was the first consumer auto-focus camera but using a technique that did not prove to be very effective. Asahi’s next auto-focus camera approached the task very differently. As I only have the camera body and not the special auto-focus lens I can make no comment about how well the auto-focus worked in practice.

This Pentax ME F is a development of the Pentax ME Super – itself a development of the Pentax ME. The ME series of Pentax cameras were introduced in 1976 with the ME. The ME Super was introduced in 1980 with the added option of manually setting the shutter speed and this ME-F in 1981. Other M series Pentax cameras were the MG, MV, MV1 and MX.

The M series were smaller and lighter than the Spotmatic and K series cameras – following the lead of Olympus with the OM series of cameras. They also all had aperture-priority automatic exposure (the MX had entirely manual exposure).

The top plate is fairly cluttered resulting in fiddly controls that my rather large fingers struggle to manipulate. On the far right, as usual, is the film advance lever. This moves through about 140 degrees to advance one frame but the first part of the motion – around 45 degrees – is required to engage the advance mechanism. The lever also has a secondary rest position which usually indicates the presence of a light meter switch – I do not know if this is the case with this camera, it could just be to make fast winding possible. 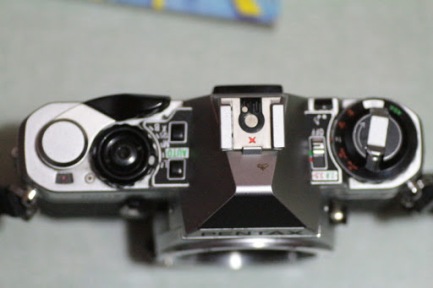 In front of the film advance lever is a window to the frame counter. This counts up from one. Opening the back resets the counter to -2 – indicated by an orange dot – which encourages you to waste two frames to get to frame one. I find I get get an extra frame in by starting at -1. To be honest, I actually ignore frame counters and just shoot until I cannot advance the film anymore which gives me 26 exposures from a 24 exposure cassette in the main.

Next to these is a large black mode dial. This locks in place and it is necessary to depress a (very) small white button to be able to turn the dial. For me, this is a two handed job and is the most awkward part of using this camera. The modes available are L, Auto, M, 125X, and B – more on these later. In the centre of the mode dial is the shutter release button. This fires the Seiko metal focal plane shutter.

Between this dial and the pentaprism hump are two small buttons which alter the shutter speed when in manual mode. These buttons are actually plenty large enough even for my fingers but they are in a rather restricted space. The pentaprism is of the size needed – there is not much scope fore reducing this in size as cameras get smaller as it still has to show the full 24 x 36 mm frame. On top of the pentaprism is am accessory shoe. At this date it is basically a flash shoe and has hot-shoe connections. This is a large central contact  allowing the use of any hot-shoe flash gun. There is also a small secondary contact for Pentax specific flash guns with added functionality. It is also possible to use a cold-shoe flash as there is also a PC (Prontor-Compur) connector on the front of the camera.

On the left of the pentaprism is a switch to activate the auto-focus function. This is useful even without the dedicated auto-focus lens as the camera has a focus confirm function with any lens. This switch has three positions – off, 2.8 and 3.5 The last two relate to the maximum aperture of the lens being used. Behind this switch is a second switch which turns the audible focus-confirm on or off.

To the far left of the top plate is the folding rewind crank. Around this is the film speed setting for the light meter. This ranges from 12 to 1600 ASA (ISO). 12 ISO seems very slow by modern digital standards but films available in 1980 were very slow. This setting is set be slightly lifting the outside of the ring and turning. This ring also sets exposure compensation from x4 to x1/4 (that is, +2 stops to -2 stops) which is set by turning the ring without lifting. Pulling up on the rewind crank itself unlocks the door.

The front of the camera is uncluttered. Right of centre (looking at the front) is the Pentax K mount bayonet fitting. this is an adaptation of the original K mount known as Kf mount as it has four sprung electrical contacts and one unsprung contact. These allow the camera to communicate with the special auto-focus lens. This is the only camera with this version of the K mount. There were later variations on the K mount with electrical contacts in other parts of the mount ring. All these are backwards compatible. I am successfully using a lens with the later version of the K mount with this camera. I lose the later functionality of the lens but it still works fine as a fully manual lens.

On the right side of the mount is a PC connector which allows the use of flash off-camera. On the left of the lens mount is a delay action lever. This is not connected to the shutter release button. First  you wind the mechanism by turning the lever down in an anti-clockwise direction. Second, you start the process by pushing the lever back up very slightly. The delay is about eight seconds.

On the back of the camera (which is made from painted steel) are three items. most obviously is the viewfinder eye-piece. This is nice and large and works well for those of us who wear glasses. When looking through the viewfinder you get the expected ground glass screen. In the centre is a ring of micro-prisms and a split-image centre to aid focussing. On the left of the viewfinder image is a vertical list of shutter speeds. These range from 4 seconds to 1/2000 seconds. The selected speed is indicated by a small green or orange LED. There is also a reminder at the top of the list if you are in manual mode. At the bottom centre of the viewfinder is a green hexagonal LED flanked by two red triangular LEDs. The red LEDs light when the lens (any lens) is out of focus and the green LED lights when the lens is in focus. There is also a noise if the switch mentioned earlier is on.

On the right of the rear of the top plate is a small window revealing vertical red and black bars. These ‘dance’ when you advance or rewind the film. The idea is that if the film is not properly loaded the bars do not dance saving you taking pictures with no film in place. Personally, I always watch the rewind crank turn for the same reason. However, the dancing bars do work.

In the middle of the back is a device that all film cameras should have – a holder for the end of the film carton. If, like me, you have more than one camera on the go at a time, it is easy to forget what film is in which camera. Below this holder are two more electrical contacts for the optional data back.

On the base plate there are a number of items. on the left under a round cover is a mechanical connection for an electrical film winder. Next to this is the button to release the rewind mechanism. In line with the centre of the lens is a 1/4 inch UNC threaded tripod socket (the old standard was 1/4 inch Whitworth which is as near as dammit to the modern standard). To the right of this is the battery compartment. This holds four button batteries which are still available today. Beyond the battery cover is a release button to undo the battery cover catch.

Loading film is as easy as it can be made short of full automation. The back is opened by pulling up on the rewind crank – as was usual with cameras of this age. The film cassette goes on the left – the rewind crank is pushed back down to hold the cassette in place – and the film is pulled across the camera and the leading edge is pushed between any two of the many white bars on the take-up spool. Very simple and hard to go wrong.

Above the white bars on the take-up spool is a fairly loose plastic ring. As the film moves past this ring when advancing the film, the movement in the loose ring is transferred to the red and black dancing bars. visible through the window on the back of the top plate. Once you have loaded the film and closed the back you need to ‘waste’ two frames as these have been fogged while the back was open. At this point, the frame counter should read ‘1’ – remember to put the end of the film carton in the memo holder and you are ready to go.

The photographer needs to set his choice of aperture and focus the lens and the camera does the rest. The viewfinder is nice and clear and the split-screen centre works as it should.

This is a delightful camera to use. My only real niggle is turning the camera on. this involves pressing a very small white button on the black mode dial and turning the dial to Auto or M or 125x. The L position is off and this switches off the meter and locks the shutter release button – the shutter can still be fired in this position by using the self-times lever.

Auto reads the aperture from the lens and selects the most appropriate shutter speed – this is not restricted to the displayed speeds, any intermediate speed can be selected. The M mode requires the user to set both the aperture on the lens and the shutter speed using the two buttons next to the pentaprism – in this case only the displayed speeds may be selected.  The 125x speed is used to synchronise the shutter and the flash at 1/125 seconds. There is also a B setting which leaves the shutter open as long as the shutter release button is depressed. I find using this dial very difficult and have to use both hands. Once the mode dial is set, I leave it set until I have finished for the day.

To use this camera with the full complement of shutter speeds requires working batteries. If they are flat, the camera can still work in mechanical mode but this restricts the camera to 1/125 seconds shutter speed. This is clearly less than ideal but does mean that you can continue to take photographs if you have no spare batteries. 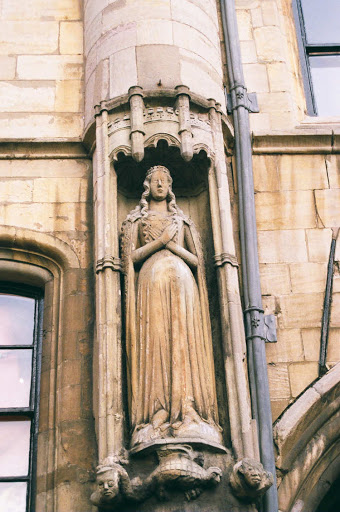 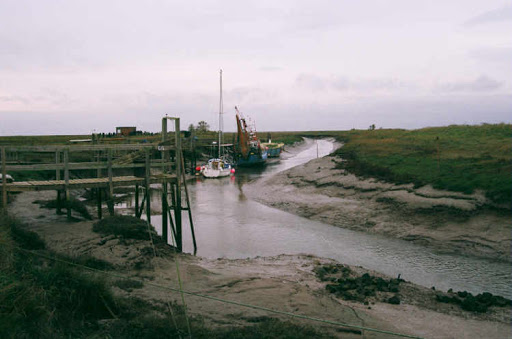 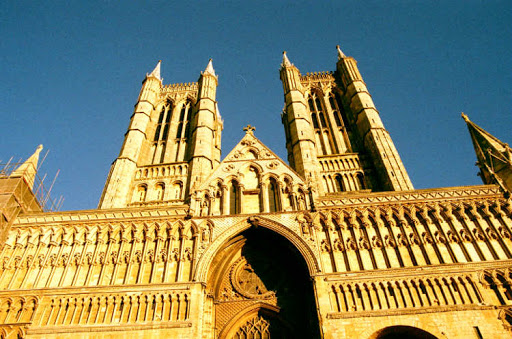