Visually, this is very like an early Retina – see my description of my Retina I type 119 – I gather the Retinette line was introduced for the folding 35 mm cameras with no rangefinder.

Before I go on to describe this camera I want to repeat the standard advice regarding using the V or self-timer setting on old cameras. The advice is not to touch this setting as the mechanism is likely to break rendering the camera useless. The man who sold me this camera was honest enough to tell me the shutter was jammed. I bought the camera on the basis that I have never had a serious problem with a Prontor shutter and did not doubt that this one would prove to be alright.

This camera is a folder. The model name is a Retinette and it was made by Kodak’s German factory. There were later models I, Ia, II etc. As well as model numbers, Kodak also produced types. This is a type 017 and was made between 1952 and 1954. The lens serial number tells me it was made in 1952. According to Dave Jentz of the Historical Society for Retina Cameras the lens was engraved with a serial number on 3 November 1952. It would have been three to six months before the new lens was fitted to a camera body by Kodak. The body also has a serial number – 928380 – but I have been unable to find any information relating to serial numbers to dates.
There is a button on the sole plate to release the front door. This does not spring open as some folders do, but the instruction book specifically says you need to pull the door open so this must be how it is intended to work. The action here is smooth enough so I am not going to lubricate the many joints in the struts – usually this is necessary on old folders but not here.
In common with the Retina series, there is a metal plate between the bellows and the shutter housing. This is purely decorative – it is missing on the Voigtlander equivalent (Vito and Vito II) – but is very effective visually. To close the camera, there is a small stud both top and bottom of this decorative plate that must be depressed to unlock the folding mechanism.
The shutter is a Prontor SV shutter – the letters SV tells us the shutter is synchronised for flash (“S”) and has a self timer (“V” = Vorlaufwerk). In common with other early fifties shutters, there is a cocking lever and a release lever. The release lever is connected via a spring steel strap to a release button on the camera’s top plate – and via this to a double exposure prevention mechanism. The fast shutter speeds work well – the test film will show me how well – but the slower speeds (1/10, 1/5, 1/2 & 1 seconds) are very slow – the one second setting is about 1 1/2 seconds. that is about 1/2 a stop out which is within the exposure latitude of film. This means the shutter should be usable at all marked speeds – I am not someone who gets hung up about precision, I am more concerned about usability.
The shutter has three Happy Snapper settings. There is a red dot on the aperture scale at just smaller than f/5.6 (I would guess f/6) and f/11 is also in red. These are used in conjunction with two small circles on the focus scale. In the manual, Kodak has these for use with different films. 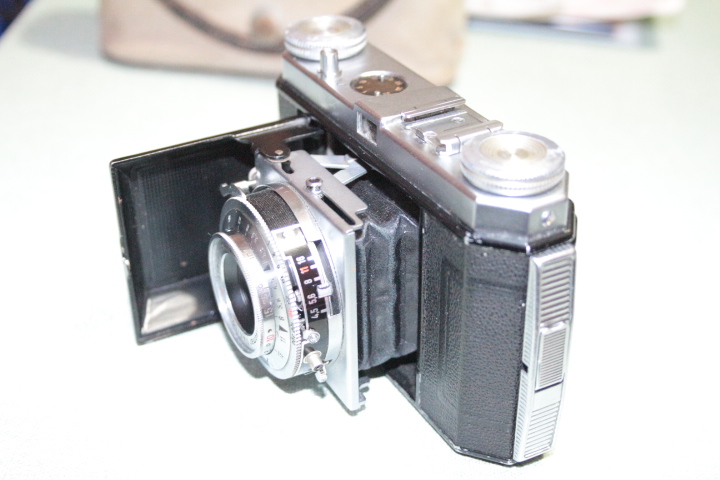 For Kodachrome film (colour slide film, no longer in production) you should set the shutter speed to 1/50 (marked in red), the aperture to the red dot and the focus to the small circle on the focus scale near to the ten foot mark. This gives you a focus range of seven feet to fifteen feet – intended for portraits. For landscapes you should use the second small dot near the twenty five foot mark. This last is the hyperfocal distance for this lens at f/6 – everything from thirteen feet to infinity will be in focus.  These settings assume bright sunshine.
For Kodak Plus X (monochrome film, no longer in production) you should set the shutter speed to 1/50 (marked in red), aperture to f/11 (marked in red) and the focus to one of the small circles. The first small circle (near to ten feet) gives a focus range of six to twenty five feet and the second small circle (near to twenty five feet) gives a focus range of ten feet to infinity. This last is not quite the hyperfocal distance – to get this you need to set the focus to fifteen feet giving a range from seven feet to infinity.
The shutter comes with two flash synchronising settings – M and X.  For F class flash bulbs and electronic flash, you use the X position and can use shutter speeds up to 1/100 seconds.  For M class flash bulbs the process is more complicated.  For these bulbs there needs to be a slight delay between firing the flash and opening the shutter.  This is to give the flash bulb a chance to burn to its maximum brightness before the shutter opens. For these M class bulbs, you set the synchronising lever to M and then set the delay timer (there is a second yellow M by the delay timer lever to remind you to do this).  The delay system does not come into effect other than to give a fraction of a second delay as just mentioned.  In order to actually use the delay timer for taking a picture, it is necessary to set the flash synch to X first.
The top of the camera is as we might expect of a 35 mm camera.  On the right is the film advance knob (we are still a few years away from having a film advance lever) and on the other end is a film rewind knob. This is activated by a small lever beneath the film advance knob marked R and A. The centre of the top plate has the small viewfinder. It was usual at this time (late 50s) to have very small viewfinders and this one is impossible to use while wearing glasses. On the left of the viewfinder is the accessory shoe – at this time it was as likely to house a rangefinder as a flash so I am still not calling it a flash shoe. On the right of the viewfinder is the frame counter – this one counts down so shows the frames left to use. it is easily set to the film length by rotating it using the two small studs on the disc. Between the frame counter and the film advance is the body shutter release. You can only depress this once the film has been advanced. As the interlock is freed by the film physically moving over the sprocket wheel, there has to be a film in the camera before the shutter will fire (you can ‘cheat’ and fire the shutter at the shutter housing, if you want to).
The base of the camera is plain apart from the tripod boss – the standard 1/4 Whitworth thread.
My test film is still waiting to be developed – later this week, I hope – and I will post the test pictures when they are ready.