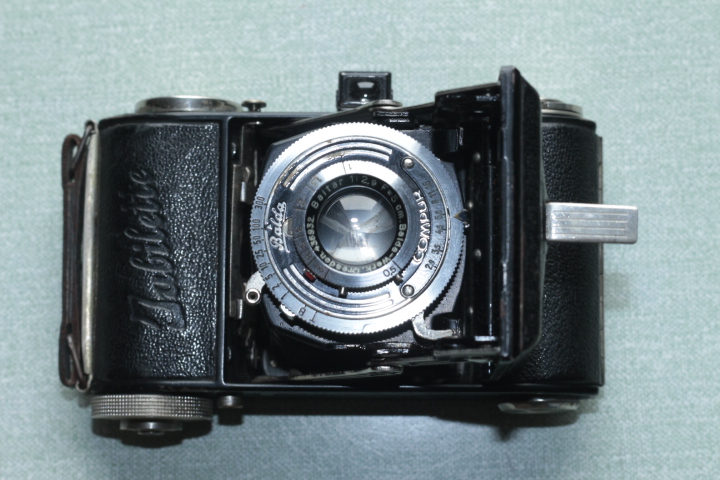 In many ways, this is an archetypical 35mm folder. My Voigtlander Vito II is much the same size and has a similar too-small viewfinder. The biggest problem I have with cameras of this date is the viewfinder. I just cannot use them while wearing my glasses. Without my glasses I cannot see the image through the viewfinder although I sometimes think that having to concentrate on general outlines and shapes improves my composition – perhaps looking at the details gets in the way.
I have been using cameras with self-cocking shutters lately and I keep forgetting to cock the shutter – this does nothing for hitting that ‘decisive moment’! I also press the door opening button on the right hand end of the top of the camera with my right fore finger instead of the shutter release button on the left. If I was using this camera exclusively, that would soon sort itself out.
I have had two problems with camera; both are probably a result of its age. The first is the shutter release mis-locating itself when the lens door opens.  This might have been down to my slightly depressing the shutter release button when opening the door. It can certainly be cured by closing the lens door and opening it again.
The second problem is the mechanism that ensures that you wind on exactly one frame – this is exactly eight sprocket holes. The shaft with the sprockets has eight sprockets on it, so advancing one frame needs the sprocket shaft to rotate exactly one revolution. When Balda designed this camera they had to work around patents owned by Leica, Zeiss Ikon and Kodak (and probably others) so they could not use an obvious and sensible system. The system that Balda designed involves pressing a button as soon as you start to advance the film and then immediately releasing the button and allowing it to ‘pop-out’ again while you continue to wind-on the film. On my particular camera it is necessary to give the camera a sharp slap to get the button to ‘pop-out’ again. I am not sure if the button is supposed to be sprung or if the camera relies on gravity – either way, it does not work without encouragement. This is not a major problem but it does slow things down a bit. See note in blue above.
What has surprised me is that I have found the depth of field table on the back of the camera to be quite useful. The results of using it can be seen in the close-ups of flowers below.

In conclusion, this camera is still very usable. It has no bells or whistles and requires the user to think for himself but for me that is no bad thing.

First a few pictures that show how well this 76 year-old camera still works.  Focus is good (it is a scale focus camera so I did not really know this until I saw the pictures), little distortion (the arch in the first picture is bowed itself – it is not the lens), and colour rendition is fine even though the lens design pre-dates the use of colour film.  I am very pleased with these.

Now a few pictures that are not so good.  First, this lens will not cope with photographing into the light. The lens is not coated at all (as was usual in 1938) and is showing significant flare.  As with using all old cameras, I need to follow my father’s advice when I was ten or so – “always keep the sun behind you.”

This next picture shows what often happens when you use the first film in a very old camera.  Winding the film causes a small amount of static electricity on the film’s surface.  This static electricity attracts any dirt lurking inside the camera, showing here as many black specks in the sky.

This last picture shows how difficult it can be guessing close distances.  The thing to do here would be to carry a yard-stick and accurately measure the distance but that is not how I work.  I guessed and relied on the depth of field keeping everything in focus. It did not work here!

One thought on “Balda Jubilette”

One response to “Balda Jubilette”