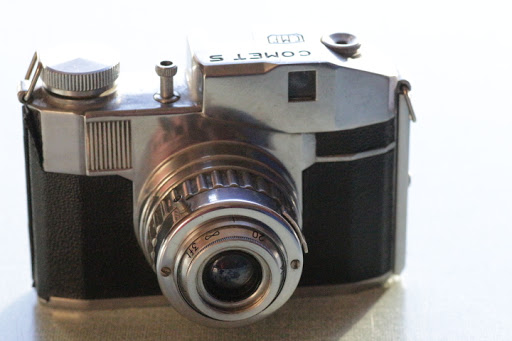 This is a cheap Italian camera which uses 127 film.  The makers is Bencini which is an Italian firm.  At the time this particular camera was made, the firm was called CMF Bencini.  They were made in Milan.
lens:
apertures:
focus range: 3 feet – infinity
lens fitting: fixed
shutter: simple
speeds: 1/50
flash: PC connector, M synch
film size: 127
The camera is small and light.  it is made from an aluminium alloy which is nicely polished.  It is small, measuring 10.5 x 7 x  6.5 cm.  It is a very simple camera with only two controls.  You can focus the camera – the range is from 3 feet (circa one metre) to infinity – and you can set the shutter to 1/50 seconds or B.
It is a half frame camera using 127 film.  The negative size is 3 x 4 cm which is approximately twice the size of 35mm.  You get 16 negatives on a roll of 127 film.
The speed selector is unusual in that it is a tab that is pulled out from the lens barrel; see photograph.  The speed selector is on the right of the picture – also visible is the PC connector for flash.  This is synchronised for bulbs only so not too much now.
The viewfinder is very small – the eye piece only measures three millimetres across.  It is the smallest viewfinder I have ever seen.  However, it is still usable once I take my spectacles off.
As a roll film camera, it is necessary to look at the red window on the back when winding on to set the next number in the red window.  As this is a half-frame camera, each number is used twice – there are two red windows – first in the left hand window and then in the right hand one.  the picture shows the two red windows, one either side of the maker’s name.
Again as is always the case with roll film  (120 and 127 size) you do not need to rewind the film.  At the end of the roll, you wind the film on until all the backing paper is on the take-up spool and remove the film and spool together and stick the end of the film down with the sticky tab provided.  The spool the film came on is then used as the new take-up spool.
As 127 film is now quite expensive and not too easy to get hold off, I doubt I will ever use this camera.  So, no test pictures from this camera, I’m afraid, but samples can be seen here.