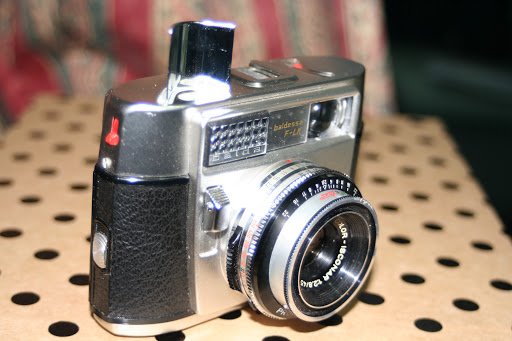 This is a nicely designed and made  cheaper camera from 1965.  This camera has a number of idiosyncrasies that would quickly became second nature with use.  It measures 120mm by 87mm by 70mm and weighs 441g.  This is my second Balda camera, the other being a Baldina from 1935.

lens: Color-Isconor f2.8 45mm
shutter: Prontor 250 LK
aperture range: 2.8 to 22
speed range: 1/30 to 1/250
focus range: 1m to infinity
ASA/DIN: 11/12 to 800/30
The shutter is the lower spec. shutter Gauthier produced for coupled light meters – top speed is 1/250, the higher spec version went to 1/500.  Only four speeds are available (1/30, 1/60, 1/125 and 1/250) but this is enough if you stick to 100 to 200 ASA(ISO) film
The lens is a Color-Isconar made by Isco Gottingen and is a triplet.  These lenses have a very good reputation (they certainly sell for a high price on Ebay).  The blueish tint says that they are coated as was normal by 1965.  The focussing range is normal for a viewfinder camera – one metre to infinity – with the focussing scale in both metres and feet.  Superimposed on the focussing scale  are three zone focussing icons – portrait, group and landscape.
The diaphragm will produce apertures from f2.8 to f22 which, coupled with the range of shutter speeds, gives a very useful range of possible exposures.  This camera has a built-in coupled light meter.  This is the match-needle type  and is not TTL – again, usual for this level of camera at this time.  On my camera the light meter does not respond to light.  Even when decrepit, there is usually some response so I suspect a mechanical fault – perhaps a broken wire.
The shutter release is on the right-hand front  of the camera which I do not particularly like but it works well enough.
The film advance is on the underside on the left which is very unusual.  The film loads back to front from normal cameras – the cassette goes on the right and the take-up spool is on the left.  Unusually (I said this camera has a number of idiosyncrasies) the advance is neither a knob nor a lever.  It is a key that needs to be turned exactly half a turn to advance the film one frame.  Again, this will soon become second nature even though it feels very awkward to me.
The film rewind is also on the underside and is the same as on a Zeiss Ikon Contessa.   Sliding the rewind release causes the rewind lever to pop out and rewinding is easy as the lever is much larger than is possible when placed on the top plate.
This camera has a built-in flash.  It uses flash bulbs so is M synchronised.  A lever on the back releases a spring-loaded flash reflector and a red lever on the side ejects the used bulbs.  The built-in flash is powered by a 15 volt battery.
There is also a PC connector for an independent flash gun.  As there is no synchronisation lever and bulb flash is built-in I assume that this PC connector is X synchronised for electronic flash.
The base also has a tripod bush.  The basic bush is 3/8 Whitworth and has a removable 1/4 Whitworth slug in it to suit the more usual tripod spec.
The only part I do not like on this camera is the back.This is made from a softish plastic.  Actually, it fits well and seems to seal properly, but it still feels cheaper than necessary.