My latest purchase is a Braun Paxette.  I am not entirely sure of the model – it seems to be a variant on the Paxette I – it has a Roeschlein-Kreuznach lens and a lever film winder.  This camera is fairly heavy for its size (that it to say, solid!).  It measures 11.5 cm wide by 6 cm high and 6 cm deep.  The Braun that made this camera is Braun of Nurnberg – there being at least one other Braun company making cameras.  I also have a different Braun Paxette model, the Paxette IIM – details here.

While this camera is not quite of the quality of the Voigtlander Vito B, it is a well made camera and was far from cheap when new.  Wallace Heaton (a photographic retailer) was advertising this in 1952 at £24/10/6 (in old money. That equates to £24.52 in new money and is equivalent to around £1,500 at 2013 values).

The back is removed by unscrewing a ring around the tripod boss on the base.  The back, base and half the front then come away as one piece.   The new film cassette is held securely by a swivelling arm which makes this camera much easier to load than the Zeiss Ikon Contaflex cameras which also have the base and back come away in one piece but have nothing to hold the new cassette until the loading is finished and the back/base replaced.  In my camera, the new film is held beneath a plate that must be hinged out of the way before the film is loaded.  This plate then acts as the pressure plate that keeps the film flat – there are a couple of springs in the back that keep this plate snug against the film.  In other Paxette models, there is only a small clip to secure the film while loading.

The shutter is a Gauthier Prontor SVS leaf shutter which offers the usual speeds – 1,1/2, 1/5, 1/10, 1/25, 1/50, 1/100, 1/300 and B – as well as M and X flash synchronisation and V (vorlaufwerk = delay) and has a PC flash connector.  The shutter release is on the side of the shutter housing.  As this shutter is cocked by winding the film, it is very easy to take photographs by mistake.  In use, it is going to be necessary to wind the film on just before taking the next picture.

The lens is a Pointar lens made by Roeschlein- Kreuznach.  This is a 45 mm lens and is coated (at least, the lens bezel has a red “C” on it which I assume means it is coated).  Roeschlein were a small lens designer and manufacturer in Kreuznach set up in the 1940s and sold to Sill Optics in 1962.  Their lenses were mostly designed to order but they made several lenses for the Paxette range of cameras.  This lens does not seem to have a very good reputation but I will judge for myself when I see the results of my test film.

Film advance is by way of a short lever which needs to be turned full travel twice to fully advance the film.  In earlier versions of the Paxette, film advance was with a knob only and I suspect this has merely had a lever attached rather than being redesigned as a lever advance.   The film rewind is a knob on the left side of the top plate.  This needs to be pulled up fully to engage the rewind mechanism.  In the rest position, it is not connected to anything which I originally mistook to mean the film was not attached properly as the rewind knob does not turn as the film is advanced.

The extinction meter is simplicity itself to use.  You look through the right-hand window at a series of numbers.  The faintest number you can see indicates the required exposure – this number is looked up on a chart on the rear of the leather every-ready case to get the aperture/speed combination required.  Downsides:  you need to look at the numbers for a long time (20 seconds is suggested in the manual) to allow your eye to adjust to the available light and you need to have the case with you at all times to access the chart.  This actually works quite well.  I have been comparing the exposure suggested by the extinction meter with the reading from my Zeiss Ikon Ikophot meter and they pretty much agree.

The frame counter is in a slightly sunken recess in the top plate and counts down to zero, so needs to be set with the length of the film loaded.  This recess also doubles as an accessory shoe – a cold shoe in flash terms.

This camera is not the easiest to use. The viewfinder is too small to use while wearing my glasses and the shutter release has a hair trigger. Those are my main complaints in using the camera. To hold, it is very much like the Voigtlander Vito B – the same size, weight and basic shape. I suspect the Braun designers had a Vito B in mind when they were designing the Paxette I. Apart from squinting through the viewfinder, I enjoyed using this camera although I don’t think I will bother with the extinction meter again. It is so much easier and quicker to use my Ikophot or Leningrad handheld meters. Loading film while out and about is easy enough – the hardest part is finding somewhere to put the removed back/base while fiddling with the film.

Some sample pictures from this camera.  These were taken with a colour film that was several years past its best before date and had not been stored properly – hence the colour cast and colour noise.  Also, I exposed according to the built-in extinction meter and they were all rather under exposed.  With old film it is usual to give a stop or so extra exposure but this film got to be under exposed.

The following is an advert for this camera from the British Journal of Photography Almanac of 1953:

And this is an advert from the 1952 Wallace Heaton catalogue:

Some sample pictures from this camera.  These were taken with a colour film that was several years past its best before date and had not been stored properly – hence the colour cast and colour noise.  Also, I exposed according to the built-in extinction meter and they were all rather under exposed.  With old film it is usual to give a stop or so extra exposure but this film got to be under exposed. 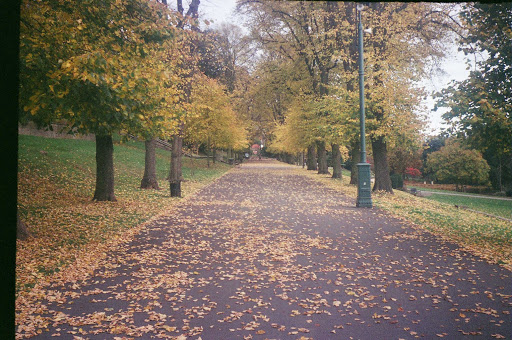