These were extremely popular, simple cameras made between 1967 and 1984.  My particular specimen was made in April 1982.
The camera is small – 215mm by 170mm by 160mm – and is quite light by film camera standards.  Controls are minimal.  The user must set the film speed – ASA only, no DIN – and focus the camera.  So, not quite a point-and-shoot camera but very close to.  The ASA settings are from ASA 25 to ASA 400.
There is a light meter around the lens and the camera selects both shutter speed and aperture to suit the light levels.  There are two shutter speeds – 1/40 and 1/200.  1/40 is rather slow with most cameras but the Zuiko lens has a focal length of 40mm 1/40 is about as slow as the camera can go without evidence of camera shake.  This also presupposes that the pictures will not be enlarged much above 5×7.  Of course, there is a tripod socket so in poor light you can always attach the camera to a tripod – the shutter release is threaded for a standard cable release.  If there is insufficient light to take a picture, a red flag comes up inside the viewfinder and the shutter is locked.  This also has the added benefit of preventing you taking a roll of film with the lens cap on (don’t laugh – some of us have done that with other cameras).
Available apertures are f2.8 to f22.  While the camera usually selects these, it is possible to select them manually for when using flash.  If you do, the shutter speed is set to 1/40.  For the flash, there is both a hot-shoe connection and a PC socket.  The actual aperture is square, so this camera is not going to produce particularly attractive bokeh (this is the only negative thing I have to say about this camera).
The viewfinder is quite small and has bright lines to outline the image area.  There are also smaller bright lines to show the image area when taking head-and-shoulders portraits.
The lens is a Zuiko 40mm lens of a Tessar type – four elements in three groups.  Focussing is essentially zone focussing with settings for:
1) head and shoulders
2) small groups
3) large groups
4) landscapes
If this is not accurate enough for you, then under the lens is a dual focussing scale in feet and metres.  This goes from three feet to infinity.
Finally, there are lugs on the sides for a neck strap and the camera comes with a wrist strap – more useful for a camera of this size.

When I bought this camera, the light seals had degenerated to a black sticky mass.  It is extremely easy to replace these with thin self-adhesive foam.

The following is an advert for this camera from the 1971/2 Wallace Heaton catalogue: 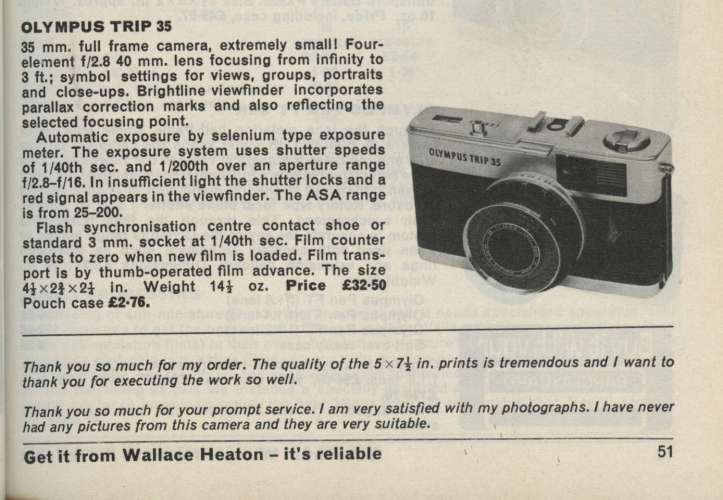 In time the excellent Trip 35 was replaced with a cheaper to make and more automatic camera – the Trip AF 50.  This is a plastic camera with a built in flash and auto-focus.  It is a well made camera but not in the same class as the original Trip 35 to which it owes nothing but the name.