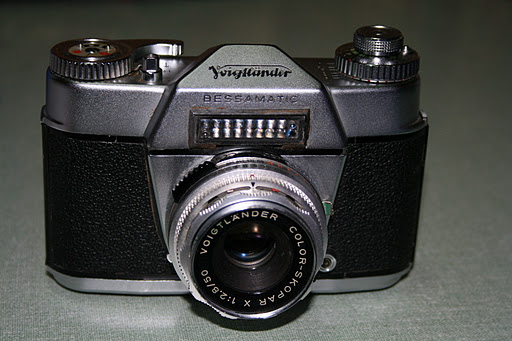 This is Voigtlander’s answer to Zeiss Ikon’s Contaflex range and Kodak’s Retina reflex range.  It was developed sometime after the Zeiss Ikon and Kodak models and this allowed Voigtlander to learn from its competitors’ mistakes.  The most obvious lesson learnt is that the entire lens assembly is detachable rather than just the front element as in the Contaflex range.   The main advantage is that better quality lenses can be added.  It also has the advantage that you can access both the mirror and the focussing screen and so can keep them clean.  This is a major fault with the Contaflexes as after fifty years of use there is a build up of dirt which can be very annoying when looking through the viewfinder – although, to be fair, I don’t suppose Zeiss Ikon were thinking about  a fifty year life span for their cameras.
This is a very heavy camera – significantly more heavy than a Contaflex Super.  It is similar to the Contaflex Super.  It has a coupled light meter with match-needles in the viewfinder.  Moving the match needle also moves the aperture ring – the shutter speed must be set first.  This can only be set to a value within the current exposure range.  If the shutter speed is already set to an unacceptable value (as in moving from the shade into bright sunshine) it is not possible to align the match needles.  This can be overridden by a lever on the lower right of the shutter housing.
The shutter is a Synchro-Compur – the same as on a Contaflex Super.  The speed range is 1 second to 1/500th second and B.  The lens is a Voigtlander Color-Skopar 1:2.8 50mm lens made in 1961 (going by the serial number).  These are superb lenses and are Voigtlander’s version of a Carl Zeiss Jena Tessar.  Focussing is from 3.5 feet to infinity.
A nice innovation is a couple of red pointers that move apart or together as the aperture is changed.  These mark out the depth of field on the focussing scale.  Focussing is by the whole lens assembly moving rather than just the front element so image quality should be maintained throughout the focussing range.
I have run one film through this camera, and, alas, there is light leaking into the back from three different places – without replacing all the light seals, this camera is useless.  I have now replaced the light seals but I have yet to test it with another film.

One thought on “Voigtlander Bessamatic”

One response to “Voigtlander Bessamatic”